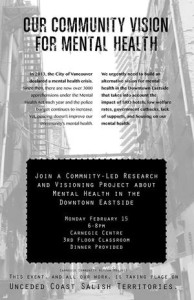 The Carnegie Community Action Project  (CCAP) is working with Downtown Eastside residents to create a Community Vision for Mental Health.

Our approach is “nothing about us without us.” We want to talk with DTES community members about what they need to improve their mental health. This stands in stark contrast to the City of Vancouver which declared a mental health crisis in the DTES in 2013, based on inflated stereotypes of people in the DTES as sick (mentally ill) and addicted.

The city’s focus is on controlling disruptive behaviour because it doesn’t fit in with their plans to normalize and gentrify the neighbourhood. Since then the police have become more heavily involved and there has been a sharp spike in apprehensions under Section 28 of the Mental Health Act.

People with mental health issues are also controlled through over-medication or being placed in institutionalized supportive housing. This is a system that focuses on the failure of individuals. The impact of social conditions and injustices, such as poverty, terrible housing and homelessness is completely ignored.

An initial meeting at Gallery Gachet showed strong support for the community-based project.

People involved in the project have diverse experiences. Some have been diagnosed or misdiagnosed with mental illness. They spoke of having their rights trampled on and being brutalized in hospitals. Others struggle to cope with mental issues, keep well and heal. Some deal with intergenerational traumas such as colonization, residential schools and missing and murdered Aboriginal women.

Participants drew up plans to listen to the community.

One method was to hold focus groups in community spaces. We opened the groups by asking what spaces and things made people’s mental health better or worse. This was followed by questions about poverty and housing, discrimination and stigma, and experiences with the cops and psychiatric system.

We also designed a survey. Many were filled out at an open house at Carnegie and more will be collected.

No one-size-fits-all answers have emerged. However, there is a clear desire for more peer and community based supports, better housing and higher welfare rates.

On April 25th we held a participatory mapping and visioning workshop at Carnegie. People drew existing or imagined spaces that helped their mental health. They described their housing and economic situations and talked about societal changes that would improve their mental health.

The organizing group is planning to report back on the material to a community Town Hall.

We hope this will be useful in developing a shared community vision and enable us to take action to oppose systems that are bad for our mental health and support the changes we need.

When asked how society should change to improve their mental health, some of Vancouver’s Downtown Eastside residents had these ideas at a workshop on April 25th:

Remove the distinction between normal and not normal.  Everyone has potential

Stop the judgement and the labels

We need housing not hard-to-fill-out-forms

Put money into services and housing, not policing