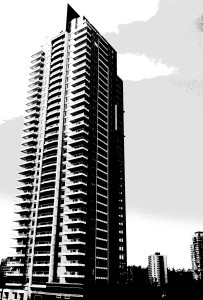 By the end of the decade, every old low-rise apartment building on the square block around Dunblane Ave in Burnaby will be destroyed and replaced by spires of concrete and glass. This process of mass displacement, says the Stop Demovictions Burnaby Campaign, should be called “demovictions” – demolition-driven evictions. These occur when City Hall grants rezoning permits to demolish old rental apartments for new condo towers. At the end of April 2016, the Burnaby planning department released a draft development plan that condemns the whole Metrotown neighbourhood to the Dunblane demoviction model. If it is allowed to pass, thousands of units of relatively affordable rental apartments will be demolished for a forest of high-rises in Burnaby’s “new downtown core.”

What will the impact of Burnaby’s new policy be on low-income renters in the neighbourhood? Since the City of Burnaby isn’t doing a social impact study, the Stop Demovictions Burnaby Campaign decided to do one.

The Dunblane demovictions survey covered fifteen buildings, which all together held 206 apartment units. Volunteers went door-to-door talking to residents. They found that 55% of tenants pay more than 30% of their incomes to rent. These renters are currently at risk of homelessness because their rent is more than they can afford. Those who had found a new place in the Metrotown area were going to be paying 25% more for rent (about $250 more per month). Increasing rents in Metrotown means low-income renters are more likely to be displaced out of the community when their buildings are demolished.

Priority 1: Stop all demovictions immediately. To do this Council should declare a moratorium on rezoning properties currently used as residential rentals.

Priority 2: Find housing for those who have been displaced by demovictions with city-funded housing outreach, support, and advocacy programs and by using city money to buy a building for emergency housing.

Priority 3: Begin a community planning process that is focused on current residents who are most vulnerable to displacement.

Priority 4: Dedicate existing City-owned lands for social housing and use this declaration to advocate for Provincial and Federal participation in building and operating social housing affordable to people on welfare and pension.

To read this whole report, visit the Alliance Against Displacement website, which hosts the Stop Demovictions Burnaby Campaign, at http://stopdisplacement.ca. To get a paper copy or arrange a presentation about the report to your group or community, email organize@stopdisplacement.ca

Homeless on the Strip in Surrey