“We Shall Not Be Moved” – Indigenous Land Defense on Lelu Island 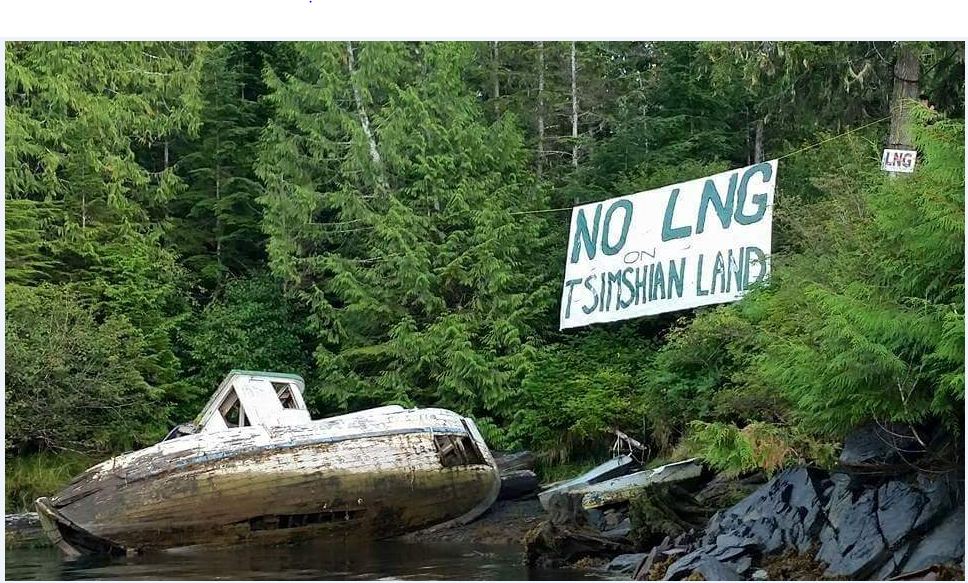 Since August, 2015, members of the Gitwilgyoots tribe of the Lax Kw’alaams First Nation have been re-occupying their traditional territory of Lax U’u’lu or Lelu Island, at the mouth of the Skeena River near Prince Rupert. Their occupation is a resistance blockade against the construction of an $11.4 billion Liquefied Natural Gas (LNG) terminal on the island, which is supported by the Provincial government, under review by the Federal government, and opposed by the Lax Kw’alaams nation.

The LNG terminal would be a project of Pacific Northwest Gas LNG, a consortium of energy companies led by Malaysian state-owned Petronas. It would make Lelu Island the destination of an 800 km pipeline carrying fracked gas from Treaty 8 territory in northeastern BC, across the unceded lands of dozens of Indigenous nations. Construction plans include a 2.7 km suspension bridge that would transport the gas from the terminal out to a dock where massive tankers will load up their dangerous cargo and travel through the waters of the Haida nation.

Lelu Island sits in the mouth of the Skeena River and next to it lies Flora Banks. The Skeena River is home to one of the largest salmon runs in the world, and Flora Banks is where the juvenile salmon hole up, hide from predators in the eel grass, and feed before heading out to sea. It plays a crucial role in the entire eco-system of the Skeena, and the proposed LNG project would have devastating impacts on the wild salmon and other marine life in that system, and on all the human communities dependent on them. “Flora Banks is not going to survive,” says Simoyget Yahaan (Donald Wesley). “The salmon will be gone by next spring” if this project goes ahead. 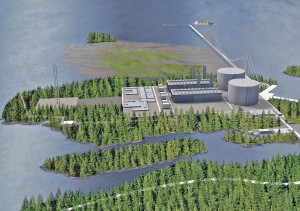 The Lax Kw’alaams land defenders have confronted exploration boats in the water, evicted researchers and officials from Lelu Island, and set up three structures to sustain their presence. They are determined to stop any attempt to push this project forward, despite an offer of $1.2 billion and political pressure from Petronas, enthusiastic support for it from the provincial Liberals, and rumblings of approval in Ottawa. In a recent video, the land defenders state, “Not only are we not going to ‘cease and desist’, we will continue to build resistance to these colonial forces and their industrial resource extraction projects.” Some Indigenous leaders say that federal approval would be akin to a declaration of war.

In mid-April, the federal Port Authority in Prince Rupert sent a letter to the Indigenous land defenders on Lelu Island telling them “to stop construction activities begun during their unauthorized presence in the port’s administrative jurisdiction.” The Port Authority claims that it is the administrator of federally held “crown” land of Lelu Island and the Lax Kw’alaams are “unauthorized” occupants.

Hereditary Chief Yahaan (Donald Wesley) and Gwishawaal (Ken Lawson) of the Gitwilgyoots responded with a letter of their own to the federal government. They stated that Lelu Island and Flora Banks are the ancestral and unceded territory of the Lax Kw’alaams, and it is their responsibility to protect and preserve it for generations to come. They questioned why “peaceful community members are being threatened with legal action for building shelters for our people on our ancestral lands.” In addition, they announced that not only are they not going to take down the buildings already erected, they are planning to build a traditional longhouse on the island as well.

The Skeena River wild salmon provide sustenance and culture for numerous Indigenous communities. In fact 40% of those living within the watershed of the Skeena, a population of about 20,000 people, are Indigenous. In January, hundreds of hereditary and elected Indigenous leaders, scientists, fishers, and residents gathered to formulate and sign the Lelu Island Declaration, promising to defend the Skeena wild salmon and oppose the LNG terminal. A few months later, a group of Lax Kw’alaams, Wet’suwet’en, and Gitxsan leaders (among others) went to Ottawa to voice their rejection of the project, and reaffirm the existence of committed and extensive Indigenous opposition to it.

Simoyget Yahaan of Lax Kw’alaams questioned whether the Trudeau government’s proclaimed “new relationship” with Indigenous people consisted of “siding with a foreign oil company, ignoring the legitimate leadership of our ancestral lands, threatening our cultures and livelihoods, denying us our Constitutionally protected rights, … accusing us of trespassing on our unceded lands, and unleashing an environmental disaster.”

As for the Port Authority’s eviction notice to vacate Lelu Island, he said, “We shall not be moved.”

The undersigned First Nation leaders and citizens of the Nine Allied Tribes of Lax Kw’alaams hereby declare that Lelu Island, and Flora and Agnew Banks are hereby protected for all time, as a refuge for wild salmon and marine resources, and are to be held in trust for all future generations.

Our ancestral knowledge, supported by modern science, confirms this area is critical to the future abundance of the wild salmon our communities rely on. It is our right and our responsibility as First Nations to protect and defend this place. It is our right to use this area without interference to harvest salmon and marine resources for our sustenance, and commercially in support of our livelihoods.

We hereby extend an invitation to all First Nations, the governments of Canada and British Columbia, and all communities that depend on the health of Lelu Island, Flora and Agnew Banks and the Skeena River estuary, to join us in defending this unique and precious place, and to protect it for all time.

At the Salmon Nation Summit in Prince Rupert, B.C., on January 23, 2016, Hereditary Chiefs from all across the Skeena watershed signed the Lelu Island Declaration in an historic ceremony.