The City is planning to relocate the popular Sunday Pigeon Park Street Market to 501 Powell Street (kitty corner to Oppenheimer Park) in mid-October. According to Mary Clare Zak, the City’s managing director of Social Policy, the city had to close the Pigeon Park location because of security and concerns over the sale of stolen goods.

The DTES Street Market Society says they support the move because the new site will be enclosed by fences, stay open more days a week, have wifi, toilets and other amenities for vendors and volunteers. There will also be a shuttle bus between Pigeon Park and Powell Street. Street vendors should have access to these basic amenities, but it is not clear why these improvements cannot be delivered at the successful Pigeon Park site.

While the new site offers some improvements, many vendors do not want to move. Vendors that CCAP talked to worry they won’t make as much money at the new location. Irene Mountain, who is a street vendor, says she doesn’t vend at the Powell site. “Where are the customers? And imagine trying to get there with full carts and bags. How would you get there unless you live right there?” David Hauke, a DTES resident and community activist with the Vancouver Area Network of Drug Users expressed the same concerns, “The Powell market is not working, there is no one there on Saturdays. There is usually more workers than vendors there. Why would it work now?”

When CCAP conducted an informal survey in September, sixty-four vendors at the market said they wanted to stay at Pigeon Park and only nine said they wanted to move to the new site. Another petition condemning the move has over three hundred signatures. Most of these signatories are vendors and according to DTES activist Homeless Dave, who has been a key organizer against the move, the petition is getting more signatures every day.

Homeless Dave says the VPD and the City are disregarding the fact that almost all street vendors are against the move. “Survival street vendors are just trying to supplement their income to meet their needs,” Dave explains. “Now the vendors are being displaced to a barren landscape devoid of customers. At the same time VPD harassment of vulnerable street vendors continues.”

The Street Market and Fair started in May 2010 as a protest against the criminalization of street vendors, who were being jailed as a result of repeated street vending tickets. The street market was a community initiative to take public space in the face of boutique and condo gentrification pressing on Pigeon Park from all sides. Later, a new set of street market organizers took the market away from its protest and anti-gentrification roots, but regardless of the political intent of those leaders the weekly low-income community presence at Pigeon Park and on Carrall St has remained an important bulwark against the tide of higher-income shoppers and boutiques. Moving the street market will mean this bulwark will be gone. 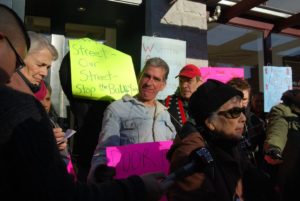 “The displacement of the Pigeon Park street market is not about security, it is about gentrification pure and simple and making the whole area like Woodward’s,” explained Kevin Yake of VANDU. “The market is now being moved to a less visible area where there is less people.”  As Kevin observes, over the last few years there has been a displacement of low-income services, supports and people further away from the Downtown Eastside core on Hastings Street.

In a similar process, the Bottle Depot was recently moved from its location on the 0 block of East Hastings Street. Soon after the move, in December 2015, the City increased the police presence on the block and also enforced an aggressive non-vending zone on the north side of Hastings Street.

These changes are coinciding with the construction and the opening of several condo projects on Hastings Street, including Sequel 138 and a big Atira social mix building where the bottle depot used to be. Serial evictor and gentrifier Steven Lippman also purchased and upscaled an SRO on that block. Hotel rooms there are now renting for more than $750/month.

The displacement of the Pigeon Street Market does not just impact street vendors but will also affect the many low-income customers who rely on the market to buy essentials and to find friends and community. David Hauke explains, “Pigeon Park is our living room, our front yard. I have talked to a lot of vendors and they said they are not going, they don’t want to go there. They want to stay at Pigeon Park where their community is.”

Fighting for our lives – #NoDAPL in historical context