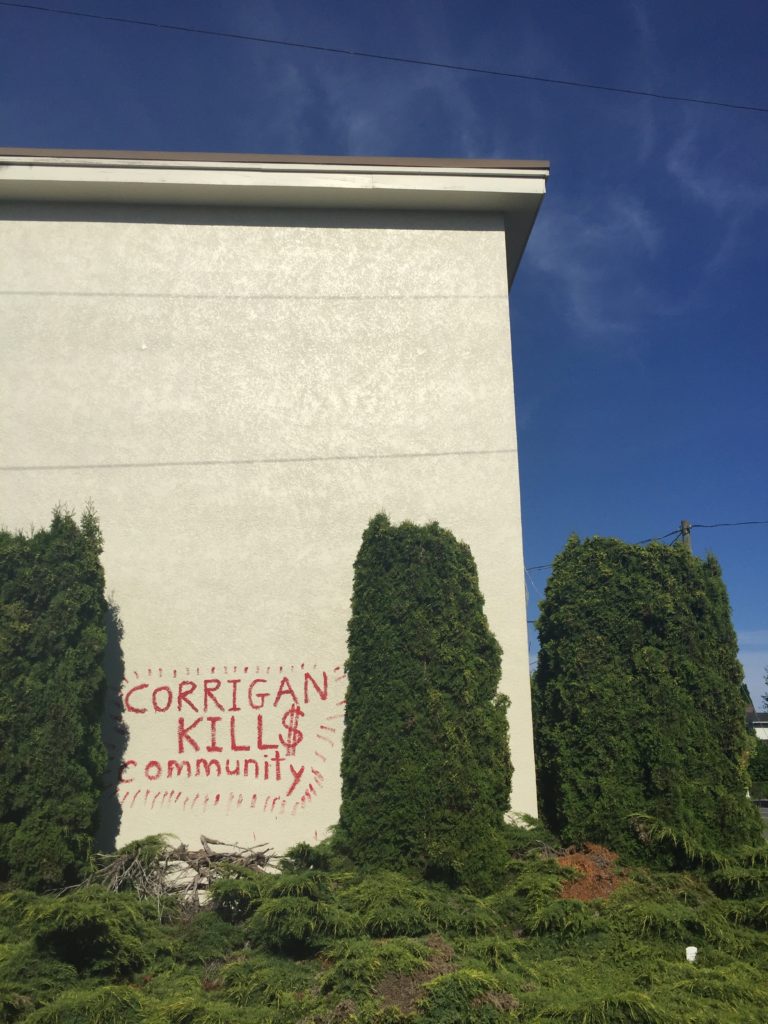 An independent report released by Union Gospel Mission and the University of Victoria on October 12th confirmed the concerns that Burnaby housing advocates have raised about the relationship between demovictions and mushrooming homelessness. Their “No Vacancy” report says “a sharp decline in low-end rental housing stock” is causing record-low vacancy rates and record-high rental costs. Meanwhile, in Burnaby, Mayor Corrigan is plowing ahead with his proposed Downtown Metrotown plan, which will upzone, condoize, and demovict people from more than 3,000 units of low-end of market apartments between Boundary and Royal Oak Avenue. Burnaby must heed this alarm and stop the bulldozers.

“The findings in this report put the lie to Mayor Corrigan’s claim that old apartment units are being replaced with condos that get rented out,” said Erika S., activist with the Stop Demovictions Burnaby Campaign. “It’s just not true! Hundreds of tenants at a time are being evicted from affordable rental buildings, so these can be demolished to make room for new high-rises with luxury condos to be built in their place, with no affordable replacement rentals in sight within a radius of 100 kilometers. How is it possible that the Mayor can ruin the lives of so many Burnaby citizens by the strike of a pen?”

The “No Vacancy” report shows that although there has been a slight increase in one-bedroom apartments (64,839 to 66,036 units) between 2010 and 2015, there has been a more dramatic shrinkage of units at the “low end of market,” below $750/month – from about 10,000 units in 2010 to less than half that amount in 2015. Erika, who lives in Metrotown, said, “If Mayor Corrigan passes his Downtown Metrotown Plan in November this neighbourhood will lose 3,000 of those remaining affordable apartments, taking them down to almost nothing. Demovicting any number of people into thin air with no alternatives for them is not only awful and unjust – it is a public disgrace and should never, never happen.”

This is the third independent report this year to call for municipalities to protect their existing purpose-built rental stock as an immediate protection against increasing homelessness. In June, VanCity released their “Rent Race” report that called on “all levels of government” to do their part to protect and develop affordable rental housing during this scarcity crisis. VanCity specifically called on Municipal governments to “protect and encourage rental housing in growth centres and along transit corridors.”

The Stop Demovictions Burnaby Campaign released its “A Community Under Attack” report in May. Focused specifically on one square block in Metrotown where every single apartment building was scheduled to be demolished for condo towers, this report established the term “demoviction” as a force destroying the low-end of market rental stock. This report called for Burnaby Council to implement an immediate moratorium on their demolition of apartments by refusing further condo developer requests for heights and density rezonings. 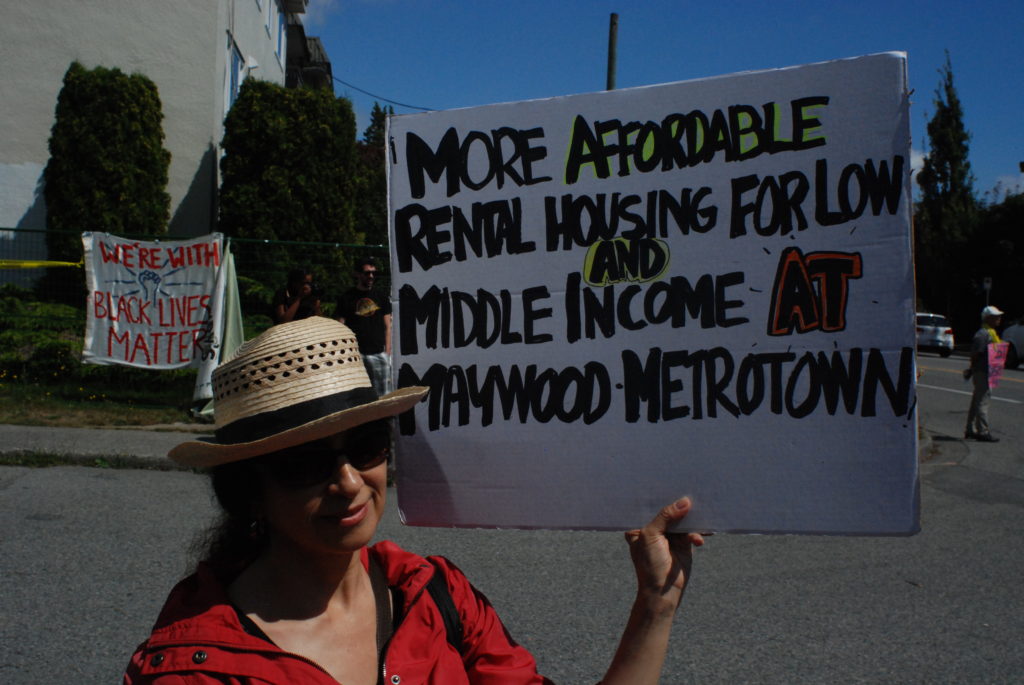 The Stop Demovictions Burnaby Campaign is calling on the Provincial NDP to intervene and stop the proposed Metrotown Plan, which the group calls “demovictions on steroids.” Campaign organizer Natalie Knight explains, “As bad as Burnaby’s site-by-site rezoning policies have been, Council’s proposed Downtown Metrotown Plan will be much worse. Council has been redeveloping the Metrotown area based on a 1977 community plan, which was developed before there was a SkyTrain corridor or a condo craze.”

Knight adds, “rezoning one property at a time is inefficient from a bureaucrat point of view and uncertain from an investor point of view. The proposed Downtown Metrotown Plan will streamline rezonings for city bureaucrats by providing a legal rezoning policy for the whole area and will give certainty to investors by laying out a legal guarantee that if they buy the properties and meet the stated conditions, they can have their towers. The Downtown Metrotown plan will make demovictions the default rule for Metrotown renters.”

Erika S. says that the “No Vacancy” report validates another problem that the Stop Demovictions campaign has been raising. “The proposed Metrotown Plan is far more than a Burnaby residents issue,” she said. “For renters, there is really only one rental market in the Lower Mainland. With rents so expensive and vacancy rates so low, we chase apartments from one city to the next, desperate for a place to live. Already now, affordable housing is a rare find. If Mayor Corrigan is allowed to demolish 3,000 units of affordable apartments it will affect renters throughout the whole Lower Mainland and, like this report says, it will make homelessness worse. Many people are desperate.”

Demovicted residents call for help from David Eby and the NDP

Matthew Hunter, a Stop Demovictions campaign member who was demovicted from a building on Imperial in the summer, explained why the group has decided to focus on the NDP. “We have protested, made presentations to Burnaby Council, hosted a public information meeting with their planners, and researched and written a report on what demovictions are doing to our community. Council and Mayor Corrigan don’t care. They don’t even ask us honest questions or treat us with respect. It always feels like they just want us to go away.”

Hunter thinks the NDP has the power to make Corrigan change course. “Corrigan’s party is part of the NDP. To be a member of the Burnaby Citizens Alliance you have to be a member of the NDP. So far I have been really disappointed to see John Horgan and David Eby standing by Corrigan and pretending the Province has the power to effect demovictions. But demovictions are a zoning and development issue, and that’s municipal jurisdiction. If Corrigan won’t stop the Metrotown Plan on his own, then the NDP should step in. If they won’t stand up for renters against their own guy, then what do they stand for?”

The Stop Demovictions Burnaby Campaign is planning a demonstration against the proposed Metrotown Plan on Saturday November 12th. The group has released a call-out for endorsements of this demonstration and its two demands on the City of Burnaby: to stop the Metrotown Plan and demovictions, and to rehouse those already demovicted. Because losing thousands of apartments will have region-wide vacancy rate and homelessness effects the group is calling out to renters and community groups from around the lower mainland to converge on Burnaby as ground zero in the fight for affordable rentals, to stop Corrigan’s plan and “save 3,000 homes.”

Risk of Another Round of Disaster Aid to Haiti to Reinforce U.S. Domination