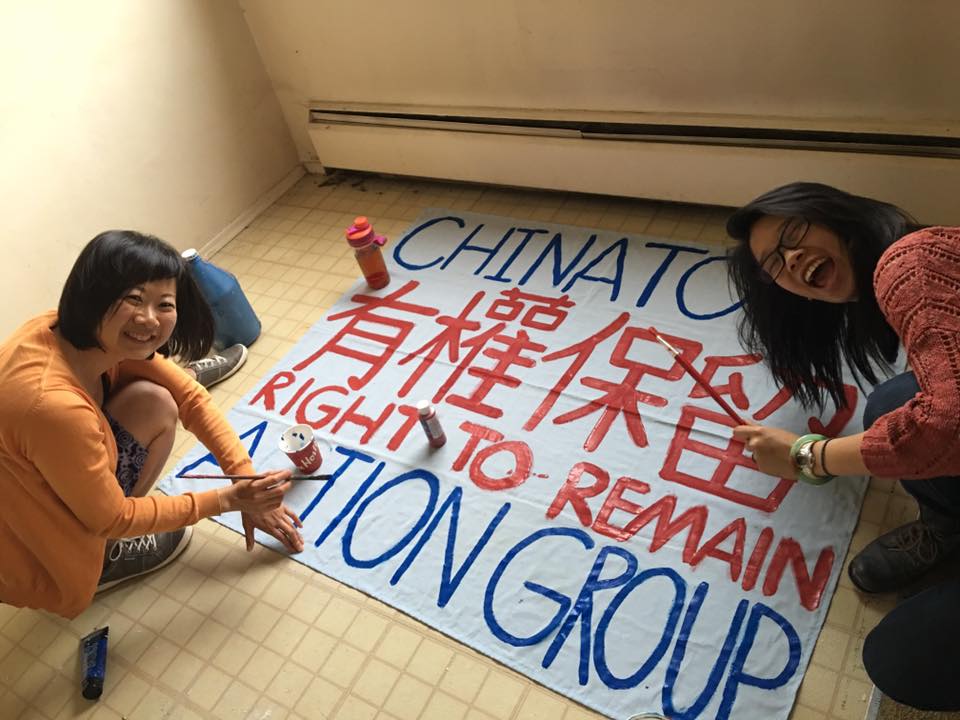 The gentrification of Chinatown is a continuation of its history. Colonization, racism and class oppression under capitalism created the neighbourhood two centuries ago and are dismantling it today. Just as Chinatown’s past cannot be separated from its present, the fight for Chinatown cannot be separated from the fight against displacement elsewhere. As part of collectivizing our struggles, we must situate ourselves with those who have a shared stake against displacement by understanding who we are and where we come from.

Chinatown was created out of the colonial project. Canada was and continues to be built on land stolen from Indigenous people, and also on the backs of exploited migrant labour. In the 1800s, Chinese labourers made up a large portion of the cheap labour that built the railroads and other infrastructure for capitalist expansion. This influx of Chinese workers largely resulted from aggressive European colonial policies towards China that destroyed its self-supporting economy and created a pool of migrant labour. Present-day colonial violence continues to depend on cheap migrant labour for extracting resources from Indigenous lands.

Chinatown was created out of racism. “Chinatown” is a European concept for an unfavorable neighbourhood characterized by vice and populated by an inferior race. Chinatown was the only place where Chinese people could rent or buy land, and also served as a place of safety and mutual aid from the overt racism and violent mobs that attacked Chinese people. White supremacy is a theme that continues throughout our colonial history, institutionalizing who belongs, who speaks, and who has access to resources. It has bolstered scapegoating of Chinese for the unemployment and housing crises, distracted from the root cause (capitalism), and used racism to divide the working class.

Chinatown was created out of class oppression. Since early Chinese migration to Canada, class divides have always existed in the Chinese community in Canada. There were Chinese among the capitalists who brought over and profited from exploiting indentured workers. There are Chinese among the capitalists who invest in speculative property. The Chinese who came to sell their labour subsequently built Chinatown, and Chinatown continues to be a working class neighbourhood today. We must not conflate race for what has always been class divides.

Under the guise of “revitalization,” new neighbourhood guidelines in 2011-2012 increased height allowances and set the stage for Chinatown to be commercialized and commodified as an exotic tourist attraction. Few Chinese seniors living in Chinatown have been able to meaningfully participate in these decisions about their neighbourhood. More often, the voices of pro-development businesses and associations, with English language skills and class privilege, are taken to represent the community. “Revitalization” is also facilitated by the practice of divestment: the withholding of funds and services for repairs and regular maintenance so that private capital can be allowed to develop with high returns on profit. Divestment displaced Chinese families from neighbouring Strathcona in the 1960s, and currently, aging buildings deemed too costly to maintain or unfit for living are being sold off or slated for redevelopment. High-end market housing and retail is prioritized over the need for affordable housing and culturally-appropriate stores, threatening the displacement of the neighbourhood’s Chinese and low-income residents.

Beyond Chinatown, colonialism, racism, and class oppression is gentrifying other racialized and working class communities, is dismantling tent cities, and is dispossessing Indigenous people of their land. It is part of the capitalist agenda that seeks to turn land into profit-making ventures and protects private property above people’s rights to land, housing and culture. Despite divide and conquer strategies that have isolated our struggles, we resist by building a shared vision of structural change and fighting alongside each other for mutual liberation. Our struggle for Chinatown is also the struggle against displacement and dispossession everywhere.