B.C.’s Minister of Education Mike Bernier recently fired the Vancouver School Board arguing that it had “misplaced focus on political tactics rather than responsible stewardship.” Arguments such as these are often used to imbue “common sense” to plans to privatize education and turn schools into luxuries only available to those who can afford it.

In Mexico, the fight for public education has consistently been stronger in southern states where the majority of the population is poor and Indigenous. The state of Oaxaca, in particular, has one of the most militant sectors of the national teachers’ union (CNTE), which has been striking and protesting against sweeping reforms to the education system introduced by Mexican President Enrique Peña Nieto in 2013, and implemented by Minister of Education Aurelio Nuño. These reforms mostly focus on establishing an evaluation process to condition teachers’ pay and promotion schemes, while ignoring real needs such as increased funding for Indigenous and rural schools (such as the one in Ayotzinapa, Guerrero).

While Mike Bernier argues that he stepped in due to “troubling allegations regarding trustees and a workplace that has become toxic for staff,” Mr. Nuño argued that in Oaxaca the Ministry of Education “had been captured for many decades by a union, which created a perverse model where teachers were aligned to political goals of the union, not to quality education.” On June 19, 2016 Mexican police attacked a protest in support of the teacher’s union in the town of Asunción Nochixtlán, Oaxaca, killing 11 and leaving hundreds injured.

A few weeks after these attacks I interviewed Miguel Cruz Moreno, a member of the Indigenous Popular Council of Oaxaca “Ricardo Flores Magón” (CIPO-RFM) who has been part of the struggle for justice in Oaxaca for decades, to hear what was happening on the ground.

Can you summarize how the movement is taking shape?

The movement in Oaxaca is currently trying to unite. The biggest demands are the denouncement of the educational reform, freedom for political prisoners, cancellation of the arrest warrants, reparations for the families of Nochixtlan, and punishment for those responsible for the massacre.

The teachers’ union is, of course, the most visible player, but are there others?

The parents are one of the strongest sectors, along with the community authorities. They came out in support of the teachers to block the roads in Nochixtlan, for example, and they were the ones who suffered the most in the attacks. They mobilized not just to support the teachers, but because they understand that these structural reforms will profoundly affect them. That’s why regions like the Mixteca and the Isthmus of Tehuantepec were the strongest, because they have been fighting for many years and are already well organized. 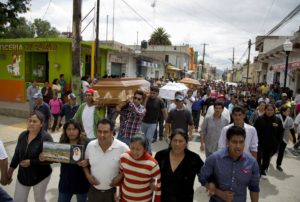 Does CIPO-RFM agree with the demands being made by the broader movement?

We see that one of the main reasons why parents have joined the movement so strongly is because of the educational reform, and this is the teachers’ main demand. We agree that this will affect us all, as already parents are being asked to pay for basic maintenance of some schools.

But our main demand, which we’ve had for a long time, is justice: freedom for all political prisoners, the safe return of our members who are living in exile, the return of our disappeared. For now, we support the main demand to push back against the educational reform, as we work on other issues.

This sounds similar to 2006, when the main demand was for the ouster of then-governor Ulises Ruiz. Everyone agreed to that, but there were many other issues that were more difficult to agree on. Do you see a repeat of this process?

Today the struggle is happening mostly in the communities, in rural areas, whereas in 2006 it was mostly in the city. So we are discussing both the single demand that unifies, but also what we all see is coming: how to prepare for a new PRI government that will continue the wholesale give-away of our communities, and will do this through violent force.

And unlike 2006, everyone is connected through social networks and electronic channels. As long as someone is aware of something, they share it and it’s easy for news to travel far and reach us. We did hear about mobilizations in Italy, the US, etc. We saw that wherever Peña Nieto goes he’s confronted. This does help, and we are thankful, but we see the danger of this support being diluted as time goes by.

And what does the future hold for the movement? How can people support this process?

One of the main points in the agenda of the movement is to say no to all industrial projects in our communities, and to demand respect of the autonomy of our territories. Mining, dams, forestry, exploitation of water; all of these should be stopped. Because right now it’s the education system that they’re targeting, but there’s also plans to privatize the energy sector, to dismantle article 27 of our constitution [which establishes rural lands cannot be sold by individuals, protecting communal ownership], and these will all affect our communities. So we’re not thinking of just resisting a few policies, but how to change politics itself. This is where we think people internationally must focus their thinking: to change politics in their own communities, and support our efforts in any way that they can.

The ceremony of birth and Kanien’kehá:ka Mohawk ancestral wisdom