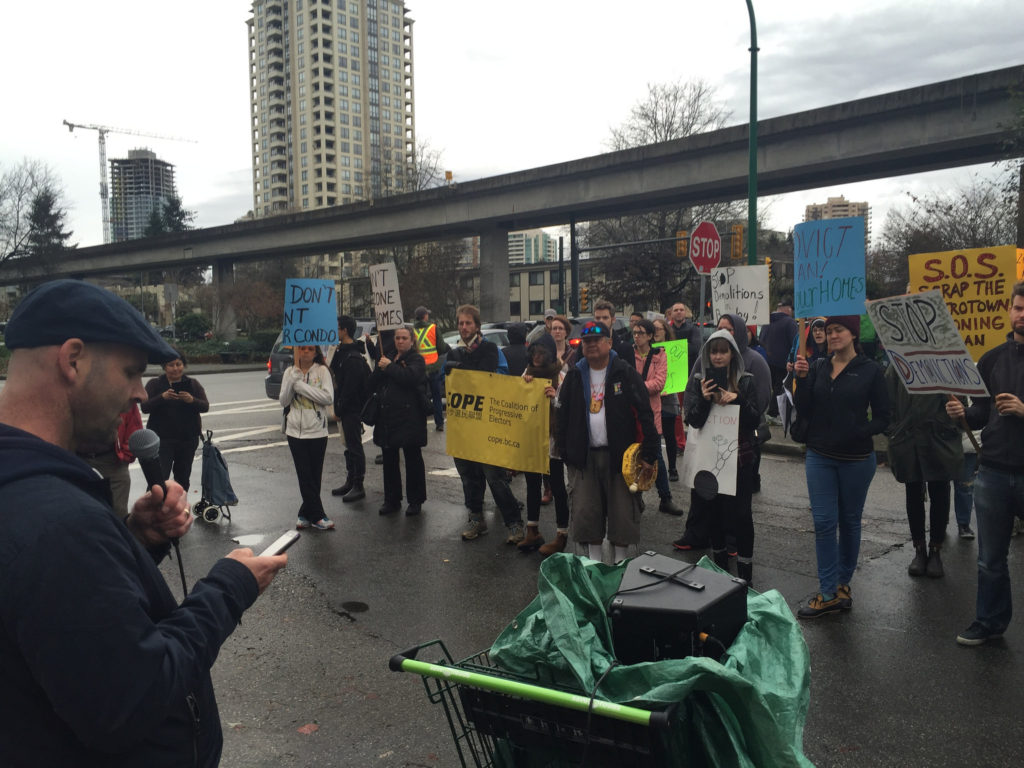 I want to once again acknowledge that we are standing on the unceded, shared territory of our neighbors, the Tsleil-watuth, Squamish and Musqueam. Not long ago they were displaced from the land we stand on today. The First Nations shared this land for thousands of years. Most of us have only been here a few decades at most, but I think we too have a deep connection to the place we call home, so when I see hard-working law-abiding residents being unnecessarily evicted from their homes for the profit of a few, I become deeply angered.

My father always told me real estate was a good investment, for over the long term it always appreciated. When he came to British Columbia, he bought some land and lived on it. When he could no longer take care of it, he moved into a condo in the city. When he and my mother could no longer live on their own, he sold it and used the money to fund his care until he passed away. When he died at 91, he left each of his four children $20,000. That money helped my growing family stay in Metrotown. Indeed, land was a good investment.

But my point is this. The only land he owned was the land he had his home and business on. He didn’t buy land like properties were bars of gold or works of art. He did not hoard it and gouge renters in need of a home close to their work and schools.

I don’t relish disrupting traffic. But sometimes we need to step out of our comfort zone when our leaders choose to ignore us. And they are ignoring us big time.

A safe place to live is a basic right and need. Fair pay for one’s labour is the hallmark of a just society. The detachment of affordable housing from our income is intolerable. Destroying affordable homes without a replacement plan is an injustice. This is a failure all levels of government share.

Today my frustration is focused on the City, Mayor Corrigan and his councilors. When we first pointed out what was happening, we hoped they would appreciate the unintended consequence of the mass displacement caused by the first couple of developments. With each new application it became increasingly clear that displacement was not a consequence, but rather the intention.

The City on Monday endorsed a regional housing strategy created by Metro Vancouver. The city had some problems with some of the actions, so as so often happens these actions got deleted. I want to share some of the deleted actions.

Planners have said to me, “Not everyone agrees with you Rick.”

We get it. Some see condo towers as an investment that will appreciate faster if the neighbourhood is demolished and rebuilt. Some believe that having low income is a character flaw, or that if you can’t afford to live here you need to move out of town. I doubt people that think this way will ever be convinced that this is wrong, unless they experience it for themselves. This is an extreme view and not the view of most Canadians.

I am appealing to the majority of Burnaby residents, unions, faith groups, student organizations, social service organizations, and politicians to recognize the injustice and stand up for their neighbours in Metrotown.

It is clear, the City and its developer friends want to cleanse the neighborhood of low-income renters.

The supplementary density bonus bylaw passed in 2010 incentivized and accelerated the demolition of the apartments along Beresford and Nelson. The Metrotown update will seal the fate of the remaining neighborhood apartments. This amounts to 6,000 residents or one in four of our current neighborhood population.

In addition to being a misguided plan, the process to pass the plan is undemocratic. Consultation was limited to the summer. Less than one percent of the community made contact with city staff over that period. The city met formally with undisclosed “stakeholders”. Their literature was only available in English. Advertising of the plan outside Metrotown was more visible than within. If people were to compare this process to the Kinder Morgan pipeline process, it would be considered Mickey Mouse. The city has spent millions in legal fees fighting that process. It is hypocrisy.

I appeal to residents outside the town centers to understand, to empathize with the threat all moderate to low-income renters currently face. Without your voice the city will move forward with this plan. This plan disproportionately hurts the poor, refugees, single parents.

My message to council is demovict this update. Start fresh and consult the people this plan affects most.