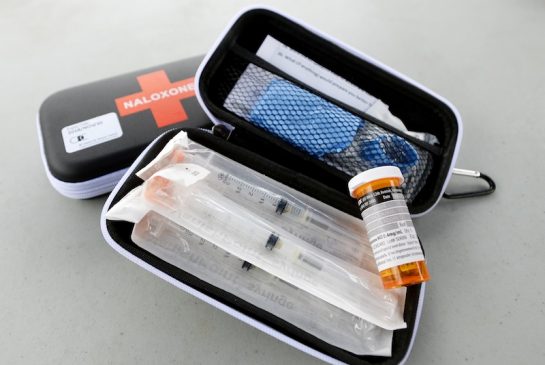 On December 19th all of British Columbia’s regional health authorities issued coordinated statements announcing the actions they would be taking to stem the tide of opioid overdoses throughout the Province. “In the face of the ongoing elevated overdose numbers,” BC Health Minister Terry Lake announced Provincial health funding and policy amendments to place overdose prevention services in communities that had lacked the resources they needed to stop overdoses.

Terry Lake’s limited and often moralizing health services available to low-income drug users in communities outside Vancouver contributed to the devastating number of 914 people killed on his watch by opioid overdose in 2016. The goal of Lake’s new year’s overdose prevention measures is, in his words, to ensure “people with the skills to respond are in close proximity in the event an overdose happens.” One month later, in late January, I called the centres that are supposed to stop overdoses to see what this means in reality. The Health Authorities did not return our calls.

I did not call those in Vancouver, which – although gravely inadequate – has more overdose prevention services than all the other municipalities in British Columbia combined. I also did not call those in Victoria, which also has long and well-established health services for drug users. I do not mean to suggest that health service providers in Vancouver and Victoria are well suited to address overdoses in their jurisdictions. In 2016, Vancouver had more deaths by opioid overdoses than any other single municipality in British Columbia, closely rivaled by Victoria on a per capita basis. But both cities have robust drug user and anti-poverty advocacy traditions and organizations that have led drug policy initiatives that, at its best, the Province has scrambled to imitate. Less visible are the lives and deaths of low-income drug users in British Columbia’s many other cities.

Vancouver Coastal Health announced that besides Vancouver itself, they would be opening two Overdose Prevention Sites in Surrey, which had the third highest number of overdoses in the province in 2016. As of January 17th 2017 the approved sites at Surrey’s Quibble Creek Sobering and Assessment Centre and the other on 135A Street were not in operation, leaving Surrey without such a site.

The Langley centre is supposed to be at the Salvation Army shelter. I called three times before I could reach anyone. When I did speak with a staff person they refused to say what services they provided, or whether they provided services at all.

In Maple Ridge there are supposed to be two Overdose Prevention Sites: one at the Rain City shelter and the other at the Salvation Army shelter. I asked two low-income drug users I know if they had heard if these Sites were operating and they did not know what I was talking about. A staff person at the Rain City shelter sounded surprised when I asked and said, “Oh yes, we’re an Overdose Prevention site!” After the announcement from the Minister, they said, Fraser Health boosted funding for an additional staff person so there are now three staff people for eight hours out of the day, typically from 10am to 6pm. So if someone outside says someone is overdosing a staff person can leave to help. They don’t do outreach or patrols and the shelter is not open to non-residents. I was not able to reach anyone at the Salvation Army shelter to confirm or deny their overdose prevention services.

The Abbotsford Overdose Prevention Site is supposed to be at the Lookout Services-operated Riverside shelter. When I reached a staff person there they said, “We don’t have an overdose prevention site. Where did you hear about this? When the news first came out we got lots of calls asking about it but we’ve never had an overdose prevention site. No, there’s no site in Abbotsford.” They gave me a number for a shelter manager who said the same.

The Interior Health Authority announced Overdose Prevention Sites for British Columbia’s Interior in Kamloops and Kelowna. It appears that the two sites in Kamloops have been operating – allowing people to inject drugs in their proximity. Only one has been operating in Kelowna; the other has been shut down twice by an anti-poor and anti-drug user opposition. Interior Health has more recently announced plans to open “mobile injection sites.”

The only Overdose Prevention Site that Northern Health announced is at the HIV/AIDS Prevention Program, also known as the Needle Exchange, in Prince George. In their announcement, Northern Health said they would expand the hours of the Site, but I found it is still only open until 6pm. I was glad to see on the website that the Needle Exchange includes a mobile van that runs until 10pm, but when I called them they said they can’t help with overdoses from the van and suggested I call 9-11.

Outside of British Columbia’s two southern urban centres, and Kamloops, the provincial government’s Overdose Prevention Strategy has changed very little. Four of the eleven Overdose Prevention Sites they claim to have opened do not exist at all. Of the six that do exist, two appear to be more or less a rebranding of already existing in-house services and one (in Langley) is an unknown. Only the three operating in Kelowna and Kamloops appear to have added meaningful health services to the Health Authority’s already existing, sparse services.

“The USA is not a safe country!” To fight Trump racism from north of the border we need to focus on distinctly Canadian racism: By the Editors