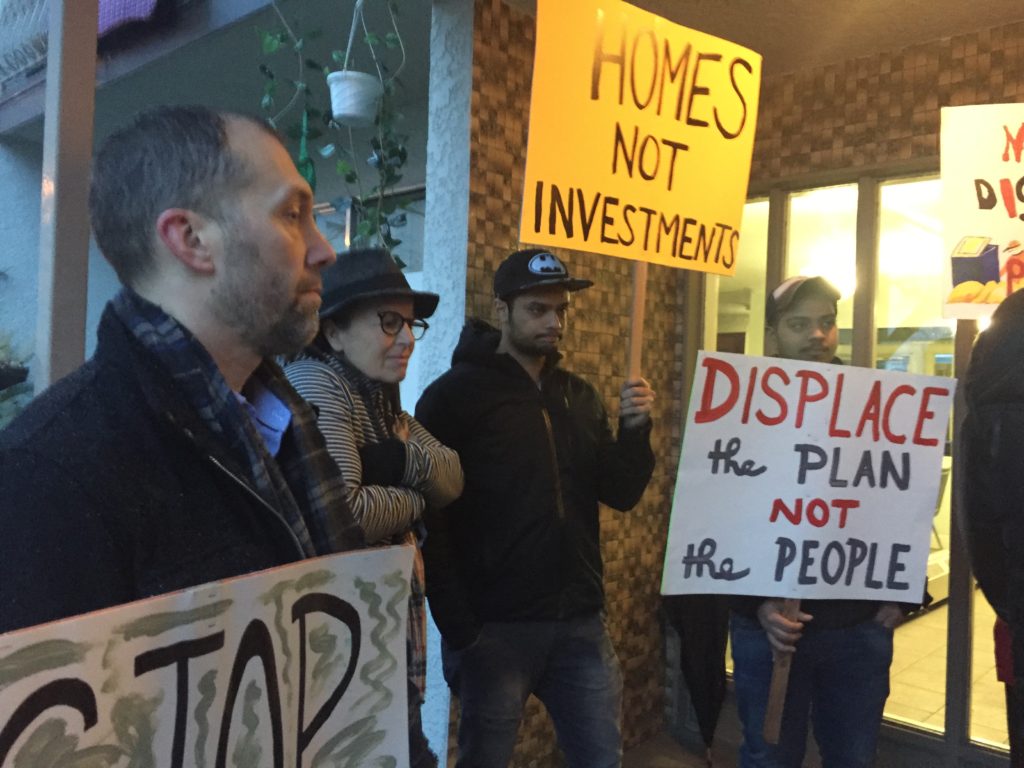 The ‘eviction’ part of a demoviction is a long process that starts long before a developer-landlord signs the legal eviction notice. The eviction of the 105 apartment units in two sprawling apartment buildings across from Metrotown skytrain station began the moment word spread amongst tenants that Belford Properties bought the 3-storey buildings with plans to rezone, demolish, and redevelop them as the “Sun Tower” condos at “the epicentre of luxury.”

That was in the spring of 2015. Afraid that eviction was inevitable, and that if they waited until it was official they’d be competing with all their neighbours for scarce apartments during a historically low-vacancy crunch, people who could find new apartments gave up their old places one by one. Although the City claims these tenants qualified for compensation, a lack of City action to ensure tenants understood this right and that Belford paid up meant that most did not receive the money they were due.

Since their rezoning application process began in June 2015, Belford, seeing an opportunity to make money off otherwise empty space, filled those apartments with new, temporary tenants, which the City of Burnaby calls “replacement tenants.” Thanks to an unstated loophole in Burnaby’s tenant assistance policy, those temp tenants are being told they won’t receive demoviction compensation either.

Is the Belford demoviction a sign of the emergence of a new underclass of temporary tenants? Temporary tenants can’t get desirable apartments because of race, nationality, and poverty discrimination by landlords who have their pick of tenants during “bidding wars” for vacant suites. Burnaby is encoding this social discrimination in the law with their tenant assistance policy that, in practice, excludes temporary tenants.

In response to the demands of a rally organized by the Stop Demovictions Burnaby Campaign, Burnaby director of planning Lou Pelletier said the City will “compensate tenants who didn’t see this coming or couldn’t knowingly make a decision” to move into a building facing rezoning. “Somebody who applies for a unit and is told that it’s not a permanent unit for you, then they’re knowingly making that choice,” he said.

Pelletier’s logic is based on the fallacy that temporary tenants moved into the building knowing it was scheduled to be demolished. Three students in their early 20s moved into one apartment in the summer of 2016; they say that the manager never told them the building would be demolished. Asked when they found out what was happening, one replied: “When I saw the eviction notice last month.” Fatima, a young college student, and her disabled mother Faigla moved into one of the buildings also in the summer of 2016. Fatima says that the building manager did tell them about demolition plans, but misled them about how long it would take; saying they could live there for two years.

The story of being misled about timing is more common: in September Rafiqul moved his pregnant wife and young daughter down from the interior because he was told it would be a year before they’d get evicted. When they received an eviction notice just 4 months later, he said they felt panicked and his wife got sick from the stress.

“We had nowhere else to go”

The other fallacy underlying Pelletier’s logic is that tenants in Burnaby hold the power of individual choice about where they want to live. This is the sort of mistake that only a homeowner or well-paid professional could make.

Fatima and Faigla moved into their apartment after being demovicted two other times – once in Coquitlam, where the municipal tenant support policy demands the developer rehouse those they demovict, and the second time from another building in Burnaby. In this second case, the property management company Gateway moved them to another building they manage. They accepted the offer because they had nowhere else to go, and because they were promised two years in the new place.

Rafiqul says that he had to fight even for the apartment he got. “I was paying $1,250 for my apartment here because the manager took a premium. He said take it or go; he was sure he’d find someone to pay that.”

Priya and her husband Mahesh also moved into one of the buildings in September. She says, “We moved in because there was nothing else that was in our price range of less than $2,000 per month.” They were also told they would have a year before receiving notice so “it was a shock to get evicted this early.”

All those who spoke out against the loophole in Burnaby’s tenant assistance guidelines balked at the idea they “chose” to move into this building. Those who spoke out were racialized migrants, and many new arrivals without local support, knowledge of Canadian laws, or familiarity with contract language. The combination of racial discrimination from landlords and  their class positions — that they can’t afford sky high rents or mortgages in condos — meant, in the words of Stop Demovictions activist and Metrotown resident Matthew Hunter, the only choice is “rent it or don’t have a place at all.”

When asked about tenants receiving misinformation about demovictions at the Belford buildings, Mayor Derek Corrigan said he thought the tenants were lying: “I think they really did know” about the demolition. He defended the interests of the landlord, saying “it wouldn’t be fair” to the massive development corporation if poor renters “got low rent [and] you also got three months” rent as compensation. Corrigan is mistaken; temporary tenants did not actually receive below-market rents. But more concerning is his concession that even if the developer did lie to tenants, that would be a matter for the provincial Residential Tenancy Branch to resolve.

The tenancy branch does not have the legal jurisdiction to enforce Burnaby’s bylaws or policies. Tenants would have to hire lawyers to challenge Corrigan’s policies and developer abuse of them in court. If tenants could find a lawyer to represent them in court, it would be hard to find a legally binding right in the City’s tenant assistance policy, because it’s just a policy.

But where they might find a legal faultline is in what the City’s exemption means about Burnaby’s rezoning process. In Burnaby’s rezoning process – where a developer requests for the City to change the laws that determine the type, height, and density of a building allowed on a particular lot of land – there are a series of hearings. The law requires that the Mayor and City Councillors arrive at the first hearing with an open mind and don’t make their decision about the results of the application until a later meeting, after hearing and considering all public input. If the Mayor and director of planning say tenants who moved in after the date of the first hearing are not eligible for tenant assistance because they should “know” that the building will be demolished, it means that the City is legally recognizing the inevitability of the rezoning application from the date of the first appearance.

“Temp” is a subsidy to bosses and landlords

Temporary tenants don’t have the support of Provincial tenancy law or Municipal policy, and they don’t have the resources to get the lawyer they would need to challenge the legality of Burnaby’s rezoning process.

According to Stop Demovictions activist, Metrotown resident, and Nuu-chah-nulth/Irish mother, Mercedes Morris, the only answer is to unite and fight back in the streets and by breaking the laws that hurt vulnerable tenants. “The level of stress and the destruction of our neighbourhood is unacceptable,” she said. Mercedes said the denial of compensation to the “moms and kids” that she met in the Belford buildings adds “insult to injury” of demoviction. On behalf of the Stop Demovictions campaign, Mercedes issued a one-week deadline to the City of Burnaby to guarantee full compensation to all evicted tenants and said that the next step of the group would be action, not talk.

When the Stop Demovictions campaign takes action to support temporary tenants, the action is against Mayor Corrigan’s framing of a sub-group of tenants as “temporary.” Like with “temp” workers, the category of temporary (or “replacement”) doesn’t adjust the obligations or power relationship for the tenant. Temp workers still sell their labour power to bosses in exchange for a small amount of money and temp tenants still hand over large portions of their wages to landlords in exchange for a place to live. No worker ever gains ownership over the products of their labour and no tenant ever gains ownership of their apartment.

What the category of “temp” does change is that it lowers the level of obligation the boss or landlord has to sustain the worker or tenant, and the amount of legal rights and protections the state extends to the worker or tenant against abuses by their boss or landlord. Clawing back rights and protections for some groups of workers or tenants is a way that governments provide a regulatory subsidy to corporations.

By his rezoning policies, Mayor Derek Corrigan is author of the demovictions crisis in Burnaby. Demovictions are eroding Burnaby’s stock of low-end of market apartments, bottoming out the vacancy rate, and growing the group of temporary tenants, which should be considered a layer of homelessness. By the loopholes in his tenant assistance policy, he is also now producing a “temp tenant” sub-strata by declaring that the City won’t protect an arbitrary group. A mostly racialized and migrant group that tends to work temporary jobs, those most vulnerable to homelessness and hidden homelessness are Corrigan’s temporary tenants.