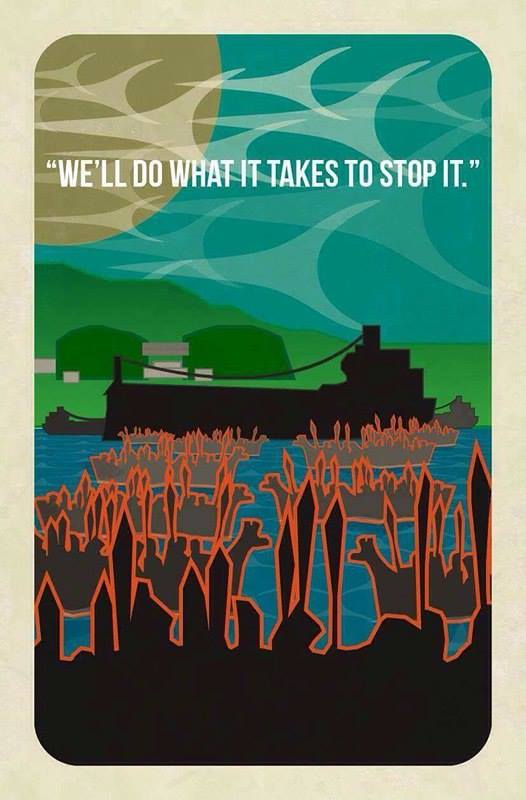 A call has gone out to all supporters for material aid in the Kwantlen Nation’s struggle against the expansion of the proposed Kinder Morgan pipeline through their territories, as the campaign to strengthen their land and water defenses is ramping up.

Educator and organizer Brandon Gabriel announced the Kwantlen Nation’s ambitious plans to resist Kinder Morgan to a packed house of supporters at the lelem’ cultural centre on March 31st. At least $4,000 will be needed to support the canoe programs, which will include construction of a new storage & launch facility, and another $4,000 more is needed for the Wellness Centre construction materials.  Built according to traditional methods at a site yet to be determined, it will also serve as a centre for educating on plant and wildlife restoration.

Many people will be needed, as this is to be entirely built with volunteer labour, and as Gabriel put it, “in addition to that [labour], we’re going to need people there to help protect us from the bulldozers, from the police, and from the oil [corporations’] security people.”

Calling out Trudeau’s “promise-breaking” about-face in approving this pipeline last November, the Kwantlen Nation has remained steadfast in its opposition to the government (and corporate) bullying tactics which have been going on since long before the first Transmountain pipeline was forced through their territories against their will in the early 1950s.

Oil multinational Kinder Morgan (now merged with Transmountain) is currently trying to double their pipeline capacity by twinning it along the same route in order to carry an additional 690,000 barrels/day of crude oil from the Tar Sands in Alberta across the mountains and down to port at the Westridge Terminal on the Burrard Inlet of Vancouver Harbour where their Burnaby refinery is based, to load into supertankers to be shipped out across the Pacific.

The dirty extraction process on Athabasca Chippewan First Nations’ traditional territories is just the beginning of the route for the heavy, sludge-like “diluted bitumen” pipeline, which proceeds through the mountains dissecting countless watersheds which feed into the great Sto:lo, also known as the mighty Fraser River. The line roughly follows the path of the river down towards the delta at its mouth on the Salish Sea, cutting directly through the lands where the Kwantlen peoples have resided for more than 10,000 years.

Almost 40,000 barrels have leaked out in at least 72 accidents along this line since construction in 1952—so many spills that it’s not gone a span of more than 4 years without one—some of which have been devastating, like the 1985 disaster which leaked 1.6 million litres of oil near the Edmonton tank farm.

Opposition to the pipeline has also been strong on the north side of the river, especially from the Tsleil-Waututh, Squamish and Musqueam First Nations, allied with environmentalists and social movements, where the concerns include a 7-fold increase in oil tanker traffic on the Burrard Inlet going from 5 to 34 ships every month. Their united efforts to make a full court press of legal challenges is still continuing on appeals, but also, like Kwantlen, they have vowed to do “whatever it takes” to stop the pipeline encroachments.

The process of building strong alliances with other frontline land defenders is already well underway, and Gabriel acknowledged the importance of the support from “our brothers and sisters from the Unist’ot’en Camp” whose reclamation camp on their Wet’suwet’en traditional unceded territories was crucial in turning back the Enbridge Northern Gateway pipeline. Support has come in from further north, at the Madii Lii Camp, as well as the occupation at Lax U’u’la near Prince Rupert, which is fighting to defend Lelu Island and the vital Flora Banks at the mouth of the Skeena river from fracked gas pipelines and a massive $36 billion Petronas LNG facility.

At a recent Sacred Fire gathering of land defenders, many vowed to stand with Kwantlen, including LaDonna Allard, one of the founders of the Red Warrior Camp at Standing Rock where resistance to the Dakota Access Pipeline sparked a widespread resurgence of interest in fighting extractive industries. While the oil has now begun to flow through the pipeline under the Mississippi River, the anger and the movement is continuing to grow.

It is a similar story for many nations along the route, where their food sources and livelihoods, traditional ways of living, eating, travel, communication and even futures are directly threatened by the proposed pipeline expansion.

Pipeline corporations disrespect the land and the people

One blatant example of the on-going disrespect was on display during the National Energy Board (NEB) hearings on the pipeline when lawyers for Kinder Morgan pressed members of several nations to say how much fish they personally eat. “That’s an insult” responded Chief Don Tom of the Tsartlip Nation, who reminded the panel of the Douglas Treaty duty to protect the waters of their fishery, so “it’s always there to be for us and for future generations.” He added,

“It’s questioning how much, based on the Indian Act, “How Indian are you? How much fish do you eat? What percentage of your diet is fish?” My point being is that it’s to be protected, not based on the amount of fish we have, but it’s to be protected and preserved for our people because we have a spiritual connection, a relationship to everything that we consume, the lands that we have.”[1]

Despite Canada’s supposed agreement to the UNDRIP which mandates a free, prior and informed consent protocol, and the government’s rhetoric of reconciliation, the Liberal government gave the go-ahead to the project while ignoring the fact that two-thirds of the 120 Indigenous nations approached by the corporation in a deeply flawed consultation process still have not given their consent. Now with the backing of the RCMP, the corporation has also begun to ratchet up their surveillance, harassment and bullying tactics in various places along the route where deceit, collusion and outright bribery have already failed to win consent.

Gabriel says they do anticipate “some form of violent colonial action,” but his concern is for the long-term protection of the land and water and to strengthen the nation’s cultural resurgence for the generations to come. “The goal is to keep going. They can come to us and say they’re doing what safety measures they can to minimize spill risks, but at the end of the day, it’s our land and future. Our ‘NO’ needs to be respected.”

He points out that it’s not just about the looming threat of a spill: there is a larger question of sovereignty and consent at stake here.

“Over the years, many coercive government agents claiming to act on our behalf have gone ahead with projects without our consent, and we’ve repeatedly seen there has been no realization of the promised spin-off benefits. All three levels of governments—federal, provincial and municipal—have long histories of action against our best interests. There has been a continuing overt and blatant disregard for our rights as Indigenous people.”

With a couple of major donations and the success of the March 31st event, the campaign is already 1/4 of the way to its first goal. But more money, volunteers and watercrafts are needed to get this phase of the work underway.

Monies can be contributed by e-transfer to <standwithkwantlen@gmail.com> (please send password in a separate email) or via their gofundme page:

“I Stand with Kwantlen” (or the ultra-hip “Straight Outta Kwantlen”) T-shirts are also available for $25 with the proceeds going to their fund.