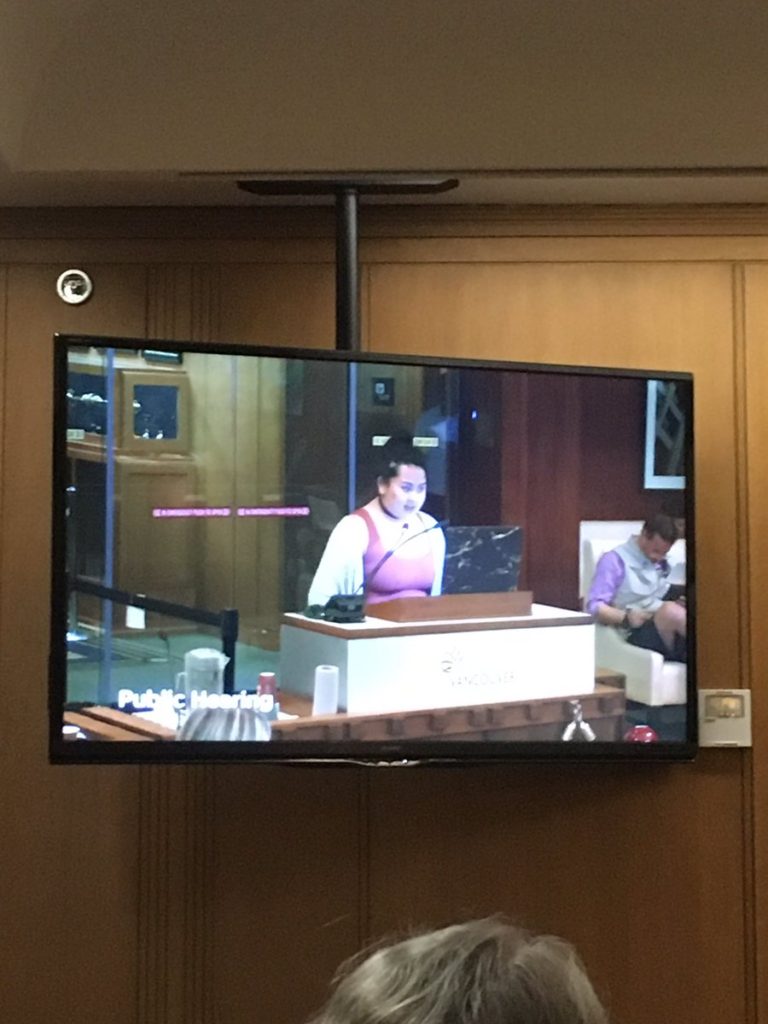 Before going further, I wish to acknowledge the unceded, traditional, and ancestral Coast Salish territories of the Squamish, Musqueam, and Tsleil-wauth nations.

My name is Lenée Son; I am a coordinator at the Carnegie Community Action Project.

I oppose the 105 Keefer project and support the Chinatown Concern Group.

Yesterday, the representative from BC Housing called $700 for rent incredibly affordable. This is simply untrue for low-income people.

Many residents are already barely surviving as it is. Residents surviving on social assistance of $610 and paying the average SRO rent of $548 have only $62 a month, or about $2 a day, left for everything else including food, hygiene, laundry, transportation, etc. How will they pay $700?

Whether it’s 8 units or 25 units at safer rates, $700 for rent is completely unimaginable for many residents. This development project does not help Chinatown and DTES residents.

Vancouver is in the middle of a housing and homelessness crisis. It is the worst it has ever been and gentrification plays a significant role. The 2017 Metro Vancouver homelessness count was just released. The count found a steep increase in homelessness across Metro Vancouver with 828 more people identified as homeless in 2017 compared to 2014, representing a 30% increase in homelessness and the highest number to date. In the City of Vancouver, there are now over 2,100 people who are homeless, an increase of almost 300 since last year. Low-income people across the city and province are continuously evicted and displaced by rising rents and gentrification. We don’t need more luxury condos, we need social housing at welfare and pension rates now. Housing is a human right.

Vancouver has a longstanding history of colonization and white supremacy. This land we stand on is stolen. Historically, Chinatown and the DTES have been a place where the most marginalized were pushed to. In resistance, these groups built strong thriving communities only to be threatened and eradicated by the same systems that pushed them there in the first place. Hogan’s alley and Vancouver’s only black community was destroyed. And now, Vancouver’s historic Chinatown is also at threat of being destroyed. From Hogan’s Alley to Chinatown, many seniors and residents living in Chinatown and the DTES have lived through oppression orchestrated by the government. It’s time that the City actively listen to those who are the most vulnerable in this city instead of those who hold institutional power and privilege such as these wealthy developers. There are survivors of the Chinese Exclusion Act and head tax, survivors of colonization, survivors of racism and displacement who continue to face discrimination each day who have come here today to tell you to oppose this project.

I support CCG’s demands, which are: