The disappearance of urban Indigenous communities

A review of Whose Land Is It Anyway: A Manual for Decolonization 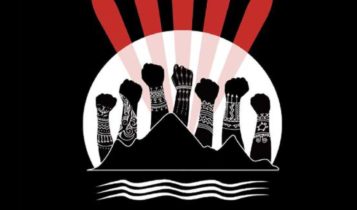 Whose Land Is It Anyway: A Manual for Decolonization, edited by Peter McFarlane and Nicole Schabus. Federation of Post-Secondary Educators of B.C., 2018.

Whose Land Is It Anyway: A Manual for Decolonization presents itself as multiple voices on the subject of decolonization. Unlike other books about decolonization, Whose Land Is It Anyway is markedly written for Indigenous readers. The collection of short, accessible essays covers a range of topics that face Indigenous peoples as we take on the challenging, lifelong work of decolonizing ourselves and the world around us. The book was inspired by a speaking tour that longtime Ktunaxa and Secwepemc sovereigntist Arthur Manuel gave in 2016, just a year before his passing. The editors are Nicole Schabus, Manuel’s partner, and Peter McFarlane, who wrote the 1993 text Brotherhood to Nationhood: George Manuel and the Making of the Modern Indian Movement.

Whose Land Is It Anyway spans a range of Indigenous and allied voices in Canada whose social and political positions diverge and, I argue, directly conflict. Following the engaging preface by Bev Sellars, former longtime chief of Xat’sull First Nation, the first chapter is authored by Taiaiake Alfred. Until recently, Alfred was a professor in the now defunct Indigenous Governance program at University of Victoria. This chapter, “It’s All About the Land,” argues the repeated point: that we Indigenous peoples must heed our ancestors and “get back to it, go back to it” – it, of course, being the land. Alfred proclaims that “the way to fight colonization is by reculturing yourself and by recentring yourself in your homeland,” and certainly if we are active within or pay attention to current Indigenous sovereigntist efforts – the strongest of which assert Indigenous sovereignty through the reoccupation and defence of ancestral territories from resource extraction – then moving back to our ancestral lands does seem to be the ultimate expression and activation of our Indigeneity.

Yet, Alfred’s perspective, which frames the entire book as it is the first chapter, troublingly overlooks (and arguably silences) the more than half of Indigenous peoples in Canada who do not live on our ancestral lands, who may not be able to return to our homelands in our lifetimes, and who instead forge Indigenous relationships and kinship structures in urban settings. As an urban Indigenous person who was adopted out of community, it is very hard to not feel excluded from Alfred’s brand of decolonization. It leaves little room for me, such that my ability to return to either of my territories, Yurok or Navajo territories, is completely dependent on the hard, slow, and indeed quite joyful work of rebuilding my familial connections, ties that were broken through colonialism, and decisively not by my own choosing.

And while Whose Land Is It Anyway does present diverse perspectives, not a single author speaks to the very common experience in Canada of urban Indigenous peoples; not a single piece gestures to what our path of decolonization may look like. From this perspective, the collection as a whole has a slight feeling of fantasy – an imagined coming utopia where Indigenous peoples in Canada will somehow suddenly throw off the fetters of colonialism, gain a significant amount of social mobility, and return to our homelands. It is a nice idea, but it does not reflect the conditions faced by the majority of Indigenous peoples in 21st century Canada.

It is also worth noting that Whose Land Is It Anyway is published not by an Indigenous publisher, or a press known to support the work of Indigenous sovereigntists, but by a union for college and university instructors, the Federation of Post-Secondary Educators of B.C (FPSE). This means that the text is meant as a teaching tool for college and university classrooms, where it will be introduced to mostly urban Indigenous students, some of whom may have strong relations with their nations and landbases, but many more of whom do not. The intended audience of this book is thus actually politically and socially excluded from the text itself, our perspectives and experiences effectively silenced. They are perhaps surprising bedfellows – Indigenous sovereigntist articulations of a Native “back to the land” movement, and the academy. Yet, if we consider the academy as a site that must always be pushed and prodded to acknowledge, accept, and support the articulations of the most marginalized people within any social group, it is less surprising that FPSE would publish a book that does nothing to reflect the experiences and politics of the majority of Indigenous peoples living today.

There are still other problems with the foregrounding of Taiaiake Alfred in this collection. Alfred has made public statements at the 2016 Native American Indigenous Studies Association conference that undermined survivors of sexual harassment and abuse, suggesting that some survivors are liars. These statements were received by Indigenous women and students as no surprise because communities have been aware for some time of Alfred’s harmful views, and at times, behaviour. In this context, it is hard to reconcile the inclusion of Alfred with the two essays in Whose Land Is It Anyway that centre the root causes of violence against Indigenous women, pieces by Melina Laboucan-Massimo and Beverly Jacobs. A gender-exclusive, binary, and heteronormative position that asserts Indigenous land relationships as the primary expression of Indigenous sovereignty, like Alfred’s, becomes increasingly hard to stomach given the incisive connections that Laboucan-Massimo draws between patriarchy, gender violence, and colonialism. She writes that:

“The colonial values of domination are embedded in patriarchy, which is one of the reasons why we see the raping and pillaging of Mother Earth as well as violence against women. I am not only talking about physical violence against women. I am talking about emotional, spiritual and psychological violence that is perpetuated in our society today and sometimes even in our movements. We must question the values we prioritize in our movements and understand how to create a paradigm shift in how we treat each other, ourselves, and the earth.”

Taking Laboucan-Massimo’s words to heart, the inclusion of Alfred in Whose Land Is It Anyway does not seem like a naïve oversight; it feels much more like a conscious decision, and an unfortunately prescient portrayal of patriarchal dynamics in Indigenous communities and Indigenous politics today. Alfred’s presence in this 2018 “manual for decolonization” reveals just how far our communities have to go to meaningfully enact decolonization in ways that respectfully take leadership from women and two-spirit people.

Another near-total gap in Whose Land Is It Anyway is two-spirit perspectives and politics. While Jeffrey McNeil-Seymour’s essay “Two-Spirit Resistance” offers a strong articulation of sovereign two-spirit ways of being, McNeil-Seymour’s voice feels added as almost an afterthought, such that it is the only piece that clearly articulates a critique of the colonial foundations of cis heteronormativity. McNeil-Seymour writes:

“Projects of resurgence often begin with ‘traditional’ understandings of men and women and their attached ‘sacred’ cisgendered responsibilities and ways of being. In those moments we must ask: Where does that leave my Indigenous relatives who don’t fit neatly into those packages? It’s time to start calling heteropatriarchy out wherever it resides.”

Like Laboucan-Massimo’s words above, McNeil-Seymour’s assertion of the need to call “heteropatriarchy out wherever it resides” asks all of us to do better in our communities and to begin, continue, and persevere in the work of naming and responding to violent ways of being that colonialism has inflicted upon us, and that we may internalize and enact on each other.

It is unfortunate that Whose Land Is It Anyway falls into the all-too-common pitfall within Indian Country of foregrounding Indigenous machismo at the expense of women and two-spirit presence and power. It also does a major disservice to the other authors included in the text, authors whose legacies of work, commitment, service, and accountability to communities make them appropriate voices for a text aimed at decolonization.

For example, Arthur Manuel, Russ Diablo, and Sharon Venne share important facts about the founding of Canada and the Indian Act that continue to severely limit the self-determination of Indigenous nations within the colonial state’s borders. Kanahus Manuel and Shiri Pasternak offer experiences and perspectives of frontline struggles, like blockades and land defence, that ground Indigenous resistance in opposition to colonial-capitalist resource extraction. Glen Coulthard’s essay on Dechinta Bush University shows how important it is for Indigenous peoples to relearn our land relationships, and also provides insights into alternatives for Western education. Nicole Schabus argues for the importance of internationalizing our struggles and making alliances with Indigenous peoples around the world. And Pamela Palmater offers an affirming vision of decolonization, as she writes,

“We have to forgive ourselves for being colonized and lay the blame properly at the feet of the colonizers. It is not our fault if some of us cannot speak our languages, do not live on a reserve, or were never taught how to sundance…. Decolonization is about realizing that we have power to take back what is rightfully ours and ensure a future for our future generations.”

While Palmater’s words are not explicitly meant for urban Indigenous communities, I find her essay to be the most inclusive of those of us who find ourselves in varying states of alienation from our families and nations; ending Whose Land Is It Anyway with Palmater’s piece is a strong editorial choice by McFarlane and Schabus.

Taken together, Whose Land Is It Anyway offers a snapshot of Indigenous political articulations in the second decade of the 21st century, a time when it seems we are still learning how to support our communities, and our accountable and transformative leaders. We undermine this project by upholding men whose abuses of power and exclusive politics (along multiple lines) precede their reputations.

In one of Arthur Manuel’s two essays, he clearly states, “You are daydreaming if you think you can negotiate your way to freedom without creating tension to push our colonizers to decolonize Canada.” We may also need to add that we are daydreaming if we think we can negotiate our way to freedom without creating tensions within our communities to push our men to do a whole lot better.

The Idea of May Day on the March: By Rosa Luxemburg

We Suffer as Women, We Struggle as Women

Whose 1919? David Lester’s Graphic History of the Winnipeg General Strike and the…

Colonialism is a process not an identity: A review of Asad Haider’s Mistaken…