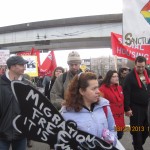 Recently members of Sanctuary Health and their allies attended a council meeting at Vancouver City Hall where the Access Without Fear policy was voted on. We made sure that Lucía Vega Jimenez does not remain invisible, she isn’t a ghost. The migrant construction workers that built the Olympic Village and the Canada line aren’t ghosts. (…)

Health care services near, but still too far

It was 2am, the first week of the spring. The phone rang at home. We knew it was time to get up and go to provide support for a brave young Latin American girl who did not have access to prenatal care from the Canadian health care system. For Ingrid it was her first experience as a doula, a non-medical person who supports a woman before, during and after childbirth. As an experienced mother, she knew what to do. (…)

Immigration officers are unwanted visitors in the Downtown Eastside

Beware, beware! Pay your ticket when using the Sky Train or the transit officers will ask you for your name and they will communicate with immigration officers. An undocumented worker was beaten in the head (a hate crime). He was taken unconscious to hospital, and suddenly woke up to realize that beside his bed there were unwanted visitors (two immigration officers). (…)