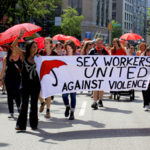 The “Vancouver Women’s Library” is not for all women: Theories and practices of transmisogyny and sex work prohibitionists in Vancouver

In February a public conflict emerged between a new space called the Vancouver Women’s Library, and trans women, gender non-conforming people, and sex worker communities who were excluded by the collective operating the Library. The collective behind the Women’s Library comes from a strain of feminism with a significant history and base in Vancouver, which believes that trans women are not real women, and that sex work is abusive in all cases, and not a form of work. When this conflict took on public and even international dimensions, some supporters of trans and sex worker opponents of the Library drafted a public letter to rally the community, titled, “Open letter against transmisogyny and anti-sex work rhetoric in Vancouver.” The Volcano newspaper editorial collective stands by the principles underlying this statement, and is proud to endorse this letter. (…)