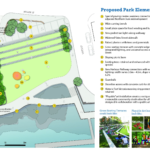 On Tuesday, March 21st, activists interrupted a City of Victoria consultation process to protest the “re-visioning” of Reeson Park, better known as Whale Wall. The City plans to construct a new pathway through the park and has proposed to redevelop the space in line with its vision for a poor-people-free Victoria. During construction the 6 to 20 homeless people who camp there per night and many more who use it during the day will be displaced. The City plans to install a “playable” art structure which could permanently displace campers if the art is characterized as a playground due to a bylaw that says people can’t camp on or near playgrounds. Since acquiring the park in 2014, the City has talked about developing the park to counter a problem of “public safety” as a way to gentrify the space for incoming luxury condo owners. (…)