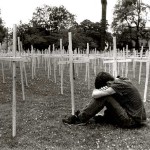 On April 14th 2016, after over a year and hundreds of overdose deaths, British Columbia’s provincial health officer Dr. Perry Kendall finally declared a public health emergency. The direct cause of this epidemic of overdoses across the province is an increase in street heroin laced with fentanyl, an opioid almost 100 times stronger than morphine. But in the greater scheme of things, we know that the “War on Drugs” has hurt people who use drugs, blaming them for their suffering, criminalizing them, perpetuating dangerous social stigma, and causing deaths. People who use drugs are left to depend on drugs from a market with no oversight, meaning that no one truly knows what’s in the drugs they’re using. The slower the government responds to a crisis, and the less they focus on ending the criminalization of drugs that makes people vulnerable to overdoses, the less they’re prioritizing the lives that are being lost. Let’s not forget, we’ve seen this before. (…)