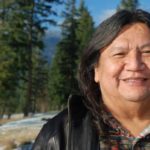 As long as I’ve been an adult and conscious as an Indigenous activist, Art has always been there. I didn’t know him as well as a lot of people in this room, but he had a huge impact on me and I learned a lot from him. Some of the things I learned from him were the importance of understanding Canadian law. A lot of the things I now take for granted, the Royal Proclamation of 1763, the British North America Act, understanding the dangers of Fee Simple property on reserve lands– these tools of Canadian law that have been used to dispossess us, I learned them from him originally. In understanding out struggles as Indigenous people and land, Art showed us that we need to think beyond reserves. It’s now something I take for granted but it was something I learned from Art.

Something else I learned from Art was understanding our struggles intergenerationally. In his writings and when he spoke, he referred to people in his family who he learned from as his legacies. In my own family, intergenerational refers to trauma and the hard things that we draw from, but there’s also that strength. It didn’t really occur to me until I became a parent myself that intergenerational also means my relationship with my son, what I pass down to him, what I teach him. In that process of passing things down to him I realize the things that I’m still learning.

One of the things that strikes me about when I met Art, was that it was a process of meeting his entire family through the years. I can’t remember if it was his daughters I met first or him. It’s a wonderful thing that Art was intergenerational as a presence. (…)