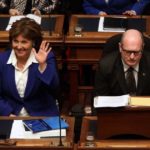 The BC NDP 2017 election platform has been celebrated as a bold and progressive challenge to the BC liberals. (…)

Landlords and developers continue to lobby for tax cuts

During this year’s federal elections we have been hearing again from BC’s pro-developer lobbyists. This time it’s the BC Rental Housing Coalition. The group is headed by the Urban Development Institute (UDI), BC’s largest developer coalition, as well as LandlordBC, the industry association representing owners and managers of rental housing in BC. (…)

Overlook the billions of dollars freed up for capitalists through tax cuts and tax exemptions. Ignore the woefully inadequate state of rent control in BC. Forget that the federal government stopped funding social housing in 1993, and that in the next 20 years over 36,000 units of affordable housing are set to lose their funding in Greater Vancouver. (…)