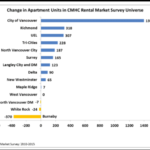 A reporter from Metro News contacted me to get my reaction to a graphic illustrating the change in numbers of apartment units in the Lower Mainland.  To be blunt, it makes Burnaby look bad. In fact, awful. This isn’t some partisan survey put out by some special interest group. This is a graph made by the City of Vancouver from data collected by the Canada Mortgage Housing Corporation and it still looks awful! (…)

Metrotown is one of the fastest growing, densest areas in Canada. It includes the spectacular Central Park, Western Canada’s second largest shopping center, Metropolis, and one of the most culturally diverse neighbourhood in the nation. It is in the City of Burnaby, which was ranked by MacLeans Magazine in 2009 as the “Best Run City in Canada”. Among the reasons that Burnaby earned the MacLeans title were the fact that Burnaby had amassed a huge financial reserve from repeated annual surpluses, and it uses the RCMP rather than a municipal force, which keeps policing costs down considerably. However, one of the factors that Burnaby faltered on was “democratic governance.” In this often overlooked criterion, Burnaby got a “D”. (…)