Articles and poems by Tracy Scott 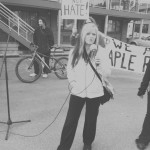 At the rally for the one-year anniversary of the beginning of the tent city on Maple Ridge’s Cliff Avenue, Tracy was upset because fewer former residents of the tent city had turned up than she had hoped. For an outsider it was obvious why. The rally was beset from the beginning by anti-homeless bigots that Tracy calls Ridgeilantes, a shorthand for Maple-Ridge-vigilantes. They were mostly angry White men who dressed like bikers and raged about their “taxpayer rights.” (…)

The Cliff Avenue tent city is only the visible tip of the iceberg of homelessness in Maple Ridge, where people live in temporary camps hidden from sight throughout and around the city. The difference between Cliff Avenue and other Maple Ridge homeless camps is that Mayor Nicole Read has, throughout the spring and summer, ordered police and bylaw officers to leave Cliff Avenue campers alone while other camps have suffered their harassment. (…)