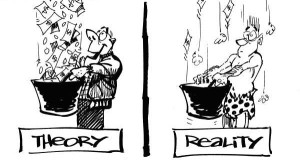 A lot of people had high hopes for housing in the federal budget that was delivered on March 22.  The City of Vancouver asked for half a billion dollars to build housing on 20 city-owned lots. What did we get?

The answer:  $2.3 billion over two years for the whole country.  This works out to $1.15 billion per year, and BC gets about 13% of that (because we have 13% of the population) which is almost $150 million. It costs about $200,000 to build one unit of housing on city-owned land, so that would be about 750 units per year for the whole province, way below the 10,000 units per year that the Alliance Against Displacement says we need. BUT, not all of the money will be used to build social housing.

The federal government breaks down the $2.3 billion like this:

$504 million will be to “support the construction of new affordable housing units, the renovation and repair of existing affordable housing, and measures to support housing affordability such as rent supplements….”  The annual amount will be just $252 million and 13% of that for BC is a mere $33 million.  IF that were all spent on building social housing, it could build 165 units on city-owned land, but much of the money will probably go to reno’s, repair, and rent supplements. This will only be available if the province agrees to match the funds.

$200 million will be for construction, repair and adaptions for seniors housing. This works out to be about $13 million per year for BC, or the equivalent of 65 units, IF it were all spend on new housing. The province does not have to match this funding.

$574 will be to pay for energy and water retrofits and repairs to existing social housing, so no new units here, although the repair money is definitely necessary.

$90 million will be available over 2 years for construction of shelters and transition homes for victims of violence. That works out to 13% of $45 million or $5.85 million for BC per year. Provinces don’t have to match this investment.

Under “Tackling homelessness” the feds propose to spend $112 million over 2 years, or $56 million a year. BC would get about $7 million of this which would be enough to build 35 units on city-owned land, except that much of the money is for “Housing First” programs which can’t be spent on actually building housing but is mostly spent on managing homelessness.

$739 million over 2 years is for Indigenous housing for the whole country. This could build almost 1500 units of housing per year if it were all spent on new housing, depending on costs which can be quite high in remote communities. 1500 units per year is only a drop in the bucket compared with the desperate need for better housing on reserves.

Lastly, the government proposes about $86 million more over two years for the entire country, “to support the construction of affordable rental housing.” Which means a public subsidy to private development corporartions for market rental housing.

In short the federal budget will provide a mere drop in the bucket compared to what is needed for new social housing.

Canada Has Blood On Its Hands – Justice in Honduras Requires a U-Turn in Canadian Foreign Policy: By Mining Justice Watch