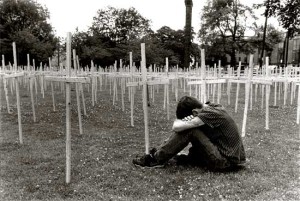 On April 14th 2016, after over a year and hundreds of overdose deaths, British Columbia’s provincial health officer Dr. Perry Kendall finally declared a public health emergency. The direct cause of this epidemic of overdoses across the province is an increase in street heroin laced with fentanyl, an opioid almost 100 times stronger than morphine. But in the greater scheme of things, we know that the “War on Drugs” has hurt people who use drugs, blaming them for their suffering, criminalizing them, perpetuating dangerous social stigma, and causing deaths. People who use drugs are left to depend on drugs from a market with no oversight, meaning that no one truly knows what’s in the drugs they’re using. The slower the government responds to a crisis, and the less they focus on ending the criminalization of drugs that makes people vulnerable to overdoses, the less they’re prioritizing the lives that are being lost. Let’s not forget, we’ve seen this before.

Overdose and HIV crisis in 1997 leads to government action

Looking back, in response to the growing amount of Hepatitis and HIV infections alongside an increasing number of fatal overdoses in 1997, the Vancouver-Richmond Health Board declared a public health emergency. That declaration was the beginning of a series of actions that, taken together, made a significant turn in Vancouver towards a “Four-Pillars” drug policy. The province began by expanding funds for harm reduction services and supported the founding of the Vancouver Area Network of Drug Users (VANDU). On the ground, VANDU and other activists continued to push for increased harm reduction services for people who use drugs, and in 2003 responded to amplified police presence in the DTES by opening up an illegal safe injection site at 327 Carrall Street. Later that year the federal government gave Insite an exemption to open its doors, 6 years after the public health emergency had been declared.

Data collection as a response to the 2016 crisis

This time the government’s action plan focuses on a more thorough collection of data from service providers and emergency responders across the province. If the evidence already collected from more than a decade of Insite isn’t convincing enough, the NAOMI (North American Opioid Medication Initiative) study comparing methadone treatment and supervised injectable diacetylmorphine treatment for heroin users should be. A 2009 medical study recommended injected diacetylmorphine, the active ingredient in Heroin, as an alternative to methadone, as a way of combating heroin overdose deaths through health care. However, given the federal government’s refusal to legalize heroin as part of health care, the government took no action. This year, Providence Health Care published the results of another clinical trial, SALOME (Study to Assess Long-term Opioid Maintenance Effectiveness). SALOME results showed that a medically supervised prescription to hydromorphone, a legal opioid in Canada normally prescribed as a painkiller, is an effective treatment option for people with an addiction to opioids where diacetylmorphine is not available for patients. Yet despite a surplus of data, all showing that prescription heroin and hydromorphone would be an effective intervention against overdose deaths, 2016 emergency action amounts to little more than collecting even more data.

In March of this year, Health Canada and BC’s College of Pharmacists announced that Naloxone, or Narcan, a drug used to reverse the effects of opioid overdoses, would be made available in British Columbia without a prescription. Yet, with the cost of the Naloxone vials and the dispensing fee (charged to cover the cost of the pharmacist training the customer how to use the drug), those interested in purchasing this are looking at spending upwards of $100. Take-home Naloxone is not yet available free of cost for all who may be hoping to stock their first aid kit or carry with them around town. Why isn’t this covered by BC’s Medical Services Plan? Furthermore, despite the provincial public health crisis having made Naloxone available over the counter for over a month, Volcano editors also found that many private pharmacies across BC don’t yet have Naloxone in stock should someone be able to pay the cost for this drug. One pharmacist told the editors that no one has informed pharmacists about the proper dispensing protocol of Naloxone, the responsibility of the BC College of Pharmacists. Another stated that people who need Naloxone should call 911 or get to a hospital, which means some health professionals are giving misinformation to patients about the urgency of action needed when someone overdoses on heroin. Other phone calls to the community health clinics and non-profit organizations revealed that there are not consistent dispensation practices taking place through health care providers across the province.

Recently, Ron McKinnon, a Liberal Member of Parliament, introduced bill C-224, the Good Samaritan Drug Overdose Act. This act would change the Controlled Drugs and Substances Act to prevent someone from being charged with possession of an illegal drug if they were to call 911 asking for help during an overdose for themselves or someone else. Because it’s a private member’s bill, it’s unlikely this will pass and become law. Why isn’t this bill being prioritized-especially when one of the country’s provinces has announced a public health emergency?

As necessary as it is to collect data to better serve communities, there are immediate actions governments could take today to slow down the rate of overdose deaths. Yet, it seems that communities will have to wait at least for a few more months before any action is taken. A recent Globe and Mail article stated “Dr. Kendall said a conference will also be held in early June to look at other programs and policies to reduce overdose deaths.”

What if Insite and the Dr. Peter’s Centre supervised prescription hydromorphone, as is done daily through SALOME? What if the Good Samaritan Drug Overdose Act was passed and people could call 911 without fear of being arrested for possession? What if the Federal government repealed Harper’s anti-injection site Respect for Communities Act? As long as drugs are criminalized, people who use drugs are considered criminals. Life-saving responses to overdoses, such as Naloxone, are necessary but for drug related deaths to decrease, the war on drug users needs to end.