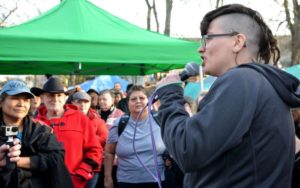 On June 15th, the Province announced its purchase of Central Care Home to provide 140 units of permanent social housing in Victoria. This housing announcement is Coleman’s first offer of permanent housing since the start of Super InTent City (SIC), the tent city on the lawn of the Victoria court house that started in November 2015. Winning new homes from a government that has declared it no longer builds social housing is a testament to the incredible organizing power, political analysis, and resiliency of SIC residents who rejected offers of temporary shelters and demanded permanent spaces for poor people to survive and thrive.

But this significant investment of $11.2 million on housing does not mean that the struggle against displacement and for housing justice is over for residents and supporters of SIC. Results from the most recent homeless count report that there were close to 1400 people in shelters, transitional housing, living outdoors and in vehicles, and in jails and hospitals, not counting the hundreds of ‘hidden’ homeless in our City. While the Province plans to use the new building to argue for the displacement of SIC in their second injunction hearing on June 27th/28th (SIC won the first one!) there will continue to be homeless people in Victoria. If Super InTent City is displaced from the courthouse lawn many will go back to the streets, in parks, and doorways subject to laws that allow cops and bylaw officers to punish poor people for being poor.

And even in the new housing, SIC’s struggle for housing justice is not over. The Province hired Portland Hotel Society (PHS) to manage the new housing facility, an organization previously denounced by residents of SIC when the Province hired them to manage the tent city. According to camp resident Ana M: “The contracting of a third party manager undermines our ability to develop leadership within the camp to run our own homes and lives.” The fight against institutionalization and paternalistic management of poor people’s lives continue as residents move into the new building and negotiate service provider rules and work toward greater resident control in supportive housing.
For more on Super InTent City’s leadership in the fight against displacement and for housing justice, see other articles by Ashley Mollison in the Volcano newspaper: When ‘rights’ are not enough / “Enlarged Citizenship” in Coleman Country. And for more on social services as an obstacle to freedom, see: Health Care as social regulation and control of the poor

Homeless and evicted community leaders gather for historic anti-displacement summit: By the Editors