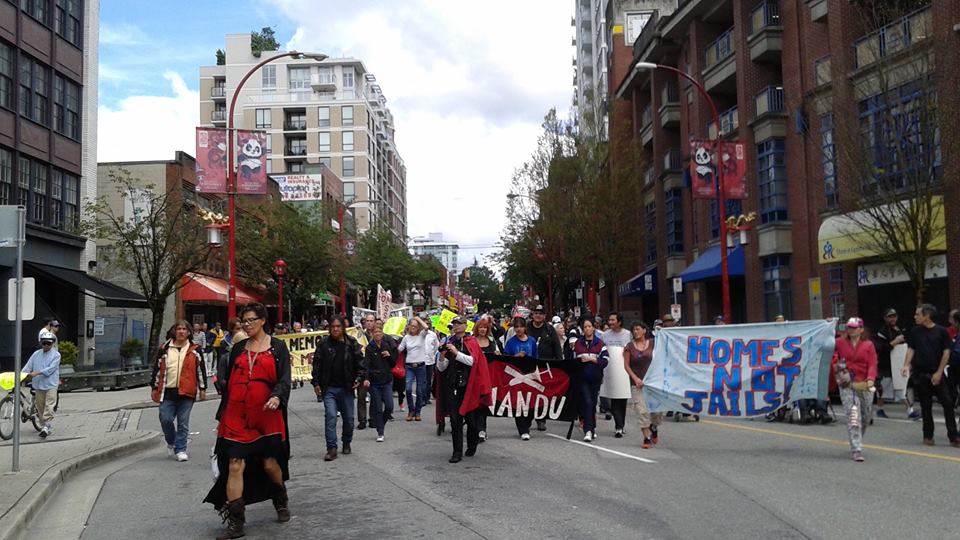 The July 9th housing justice day of action called by Vancouver Area Network of Drug Users has spilled over from one day to two ongoing actions for housing justice. A Tent City is being set up in the Downtown Eastside, in an empty lot at 58 West Hastings, where the Olympic Tent Village was during the 2010 Olympics. And in the Metrotown area of Burnaby, residents demovicted from three buildings on the 5000 block of Imperial Street are supporting an occupation of one emptied apartment building. These coordinated occupations show that the housing and homelessness crisis is not just a matter of the so-called “street homeless;” the crisis includes more than 100,000 people throughout BC who are evicted, couch surfing, displaced, underhoused, pushed out of tent cities, criminalized, and homeless. We are calling out for homeless and evicted people to join these occupations, take them back from development corporations, and transform them from protests to spaces of survival, safety,
and community.

Perhaps squats may now be joining tent cities as spaces of patchwork survival for displaced people. The Metrotown occupiers declare the solidarity and unity of the demovicted with homeless people. The most vulnerable amongst the eighty demovicted from this parcel of buildings we occupy were pushed out into “hidden” homelessness, couch surfing and crashing with family or friends. But no couch surf lasts forever. The difference between “hidden” and “street” homelessness can be just a matter of days. We should not allow apartments to sit empty while our people sleep on couches or on the street.

The Demoviction Occupation at 5025 Imperial (and adjoining buildings which are also empty) calls out to homeless and evicted people and supporters of housing justice in and around Burnaby to come take an apartment. Sleep here one night or many. Hang out with our growing community and share food and discussions. The RCMP has said that they will not take action to displace the occupiers until Amacon, the owner of the building, gets a court injunction for our removal. Although the police could come and remove us at any time, because it is the weekend, it could take awhile. We invite the community to come take advantage of the open building and empty apartments. Let’s take the housing we need!

The Vancouver Area Network of Drug Users (VANDU) and the International League of People’s Struggles (ILPS) led over 300 residents, primarily from the marginalized communities of the Downtown Eastside, on a rally and march for Housing Justice. We feel the effects of property speculation and gentrification here most acutely, where residents are being displaced and homelessness is only a moment away. The message? No more: we demand housing justice now. And tents are already up, and we call out to all unhoused people to join this community, based on respect and social justice. Let’s demand the housing we desperately need and deserve. Please visit tentcityvancouver.wordpress.com and support us.