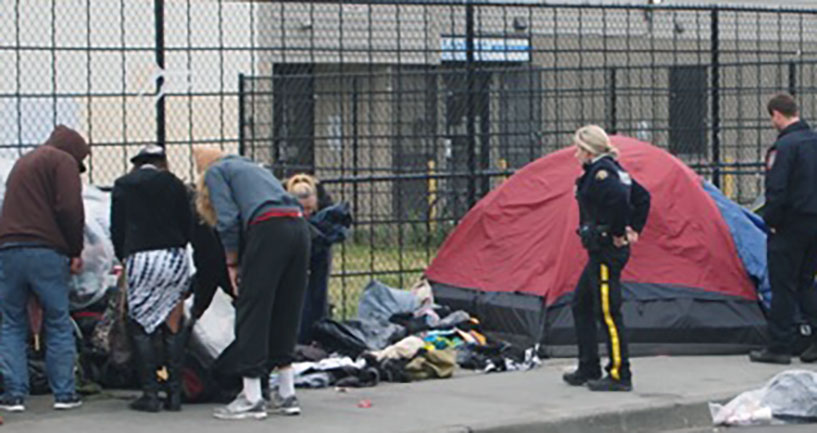 Along 135A Street in Surrey (aka, the Strip), homeless people gather together in small groups, erect tents and tarps to shelter themselves and their belongings, and access the limited services available. And every morning police and bylaw officers arrive to force them to take down their tents and make-shift shelters, pack up their possessions and make everything “moveable.” City trucks are present to dispose of any unwanted material or belongings left unattended. Some days the visitation by law enforcement is repeated in the afternoons as well. Some days the routine is more aggressive than others in an effort to completely sweep the Strip clean of homeless people and their few material possessions, only to have them return hours or days later because there is nowhere else to go. Cops are present to protect bylaw officers (who wear uniforms similar to police) and to harass or arrest people for drug possession, theft or outstanding warrants.

The Volcano caught up with Tara and Wanda on the Strip and spoke with them about these daily rituals of state power used against the bodies and survival strategies of poor and homeless people.

Tara: The role of the police is to intimidate and harass people; they are bullies. They tell us we can stay, then they tell us we have to move. But where do we move? I wish there was one spot where everything was looked after, like this field; everyone could camp here and look after it. It’s safer to be together in one spot.

Once I got beat up by four cops. They thought I was high but I wasn’t; I was waiting for welfare to open. And then I got the shit kicked out of me and was in the hospital for a week. There was no reason; they thought I had drugs on me and I didn’t. They thought I was flipping out on them but I just asked them to leave me alone. And they never did. Once you’re marked you’re marked, and they pick on you all the time.

Bylaw threw away my purse that had $800 in it and my iPod. I had trouble sleeping when I was on the Strip; I’d be up for days at a time. I was always afraid that if I closed my eyes they would take my stuff. You wake up and they’re pulling your tarp off you. They tell you to hurry up and pack up or you’ll get your stuff thrown out.

Wanda: The cops are down here, they say, to stop the drug scene and the fentanyl overdoses, but they are never going to be able to control or stop the drugs. Some days it is every 10 minutes the cruisers drive by or they’ll sit here in the Legion parking lot for hours and hours. I had cops watch me for 5 hours one day, watch me play with my dogs and socialize with my friends because I’m homeless. I can’t go and look for a place because if I do they are going to take my stuff or vandalize it. I had one cop tell me I was a waste of skin and the world would be a better place without me. He hurt me that day and I did nothing wrong.

When they go through here everyone is a suspect, everyone is guilty. Everybody is labeled a criminal, for one reason or another. Either because of drugs or stolen stuff like bikes. If anyone in the city makes a report that something got stolen, the cops automatically come here, and target people with records. They question them, harass them; and it’s not right.

We get treated so badly by bylaw and cops. If you aren’t with your belongings, they will throw it into the truck. If you go to try to pull your stuff out of the back of the city truck, they will arrest you for obstruction. The city says they keep it for 14 days and we can go claim it, but when people go to the city to ask for their stuff, no one knows anything about it. People have lost ashes of loved ones, photos of family members, pieces of ID and medications. The other day I got a $500 fine for “excessive waste”; when I asked what waste, the bylaw officer just pointed to all my belongings. They know I can’t pay; it’s just harassment.