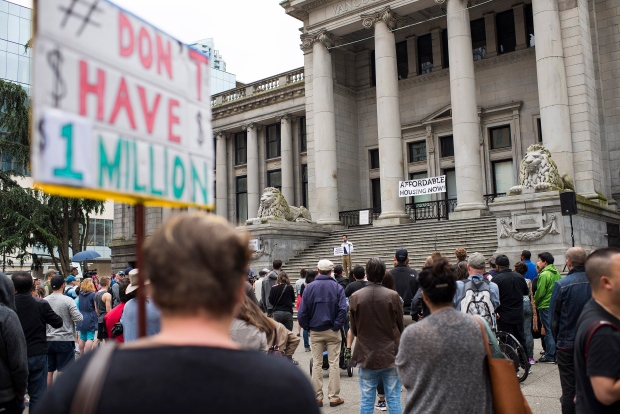 It is easy to say whether the home-ownership and home-less housing crises are the same. They are not. It is more difficult to say whether homeless and evicted people can (strategically) share a social movement for housing justice with those who want to own homes.

A hundred years ago property ownership was the greatest ‘tell’ of urban respectability and imperial belonging among white workingmen in Vancouver. A white man who owned property had a good, secure, craft union job in the city. Or he worked for the government and had a small business on the side. Part of his property ownership was his home, which included his wife and children, who were no longer his legal property, but his cultural hold over them was nearly as strong as law. His property guaranteed his right to vote, his protection by police, and his Canadianness.

The classic shorthand for an affordable house is that it costs no more than three times your annual income. In mid-2016 the average price of a detached home in Vancouver was $1.5million, which is about 23 times the average household income of $67,000.

A VanCity report from Spring 2016 said that mortgage payments give this average household a “negative discretionary income,” which means they spend all the money they earn and increase their debt by about $2,745 every year. The consumer solution is to buy smaller home: a 1-bedroom condo or townhouse would allow the same household to bank up to $16K/year. But if they had kids or wanted more space, their earlier investment in a 1-bedroom unit might not help very much.

The desperation to own has condo developers marketing to median income earners by building smaller. Smaller condos are cheaper because their square footage is less, but the price per square foot is higher, so it’s a win-win for developers who can fit more units in a building, with more expensive floor space overall. It is also a win-win situation for banks, which hand out more mortgages on these smaller units. This doesn’t mean private property is no longer economic power. It is. The point I want to make is that the group that harnesses this power is smaller and more elite than ever. While a large section of the Canadian working class gained economic security through buying property in the postwar period, and then profited from the real estate price boom in the 1980s, that period has passed. Those who inherit property are inheritors of past wealth and are outside this new trend, which is the concentration of private property more and more in the hands of fewer and fewer. Private property ownership is working for development corporations and banks but not for most mortgage holders.

A counter proposal: Free homes for all

It is the gap between cultural and economic power that is creating a feeling of insecurity and a crisis of settler entitlement for many people who think of themselves as rightfully homeowning Canadians. Rather than scramble to recover the racist, heteronormative-domestic, colonial security of a few, we should take this occasion to walk forever away from private property ownership and towards an anti-colonial commons.

There are two problems with social housing today. One, there is not nearly enough of it. Activists estimate that we need a 100,000 units of social housing in BC to end homelessness. And two, the social housing that is being built is operated as “supportive” housing, which is pathologized as housing for people with addictions and mental health illnesses. Supportive housing residents are forced to give up their independence and dignity as a condition of not being homeless.

Rather than accept the scarcity paradigm, we could end homelessness by joining those shut out of any homes with those shut out of home ownership and fighting for free homes for all. The homelessness crisis could be partnered with the homeowner crisis if the prospective homeowners would abandon their demands for private property ownership, either theirs or their landlord’s, and instead demand free social housing for all workers in Canada, including those who are unemployed. Free social housing for all would leave the stigma and pathology behind; it would be more secure and healthy than market rentals; and it would abandon forever the propertied division of the working class.