According to the United Nations there are more than 65 million forcibly displaced people in the world. While the majority are internally displaced within their nation, many millions have been forced to cross borders in search of safety.

Many factors have contributed to the swollen numbers.

Parts of the world are trapped in prolonged wars, including Iraq, Afghanistan, Yemen, Syria and fifteen countries in Africa, including Sudan, Central African Republic, Libya, Algeria, Mauritania, Morocco, Somalia, Burundi, Rwanda, Mali, and Nigeria. These conflicts have been fueled by imperialist interventions, conflicting regional powers, the rise of armed fundamentalist groups like ISIS, and repressive dictatorships.

Meanwhile global capitalist investments (including in ecologically destructive mining projects in which Canadian corporations play a leading role) have displaced people from their land. And small-scale agriculture is being undermined and peasants forced from the land. Poverty, scarcity of access to resources, ecological destruction and global warming (which threatens to make parts of the planet uninhabitable in the coming years) all contribute to a crisis that seems likely to grow.

State authorities like to make distinctions between a small minority of recognized deserving refugees and the vast majority of ‘undesirable’ migrants. But they don’t take into account the many reasons why people are forced to move in order to survive.

The overwhelming number of displaced persons are located in poor or relatively poor countries. Many live in large camps with inadequate resources, unsafe conditions, and little hope or opportunity. But some have sought to enter into the industrialized nations in Europe, the US, and Canada. To do so has become increasingly dangerous. There has been a steady rise in the number dying in the Mediterranean and crossing the desert from Mexico into the United States.

Europe has taken in a limited number (though a drop in the bucket worldwide), particularly Germany (which is motivated partly by labour shortages). However, efforts are being made to stop the influx of “undesirable” migrants.

Ideas include deporting people stranded in Europe back to Turkey, paying money (which some would call bribes) to Turkey to take stronger measures to block migrants from crossing into Europe, and paying repressive regimes in Africa to stop people from going to Europe. Meanwhile Europe will open up limited immigration for those with money, skills, and education to enter.

All is not well in Europe, the US and beyond

The globalized capitalist economy, including corporate-driven trade deals, has created wealth for some and ever deepening inequality for many. Industrial production has been shifted in search of cheaper labour. This has fueled a sense of insecurity, fear and smoldering resentment. Unfortunately, much of this has been directed by right-wing, nationalist, racist, anti-migrant and neo-fascist parties into fear and hatred of others. In the United States we see Donald Trump make naked appeals to racism and attempt to make public hatred acceptable. 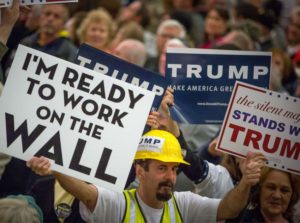 Is Canada So Different?

Justin Trudeau is successfully cultivating an image of Canada that stands in stark contrast to the previous Harper government and the many awful policies in other countries. But how true is it? Yes, thousands of Syrian refugees have been admitted, but financial support is low and not enough to cover high housing costs. Meanwhile there has been no effort to admit people from countries in Africa facing equally desperate situations.

Canadian immigration is driven by the needs of capitalist labour. There is an emphasis on recruiting immigrants with money and entrepreneurial skills. At the same time, there is a growing pool of low-wage temporary foreign workers with very few rights. The Canadian Border Service Agency has been detaining increasing number of people without charges and stepping up deportations.

Poor and homeless people are being scapegoated, subjected to hate and criminalized. Migrants face similar violence. It is important not to fall into the trap of oppressed groups blaming each other. Instead, the material fight against racism today must take place at the level of immigration policy, while our justice movements fight on the ground to open borders around the world.