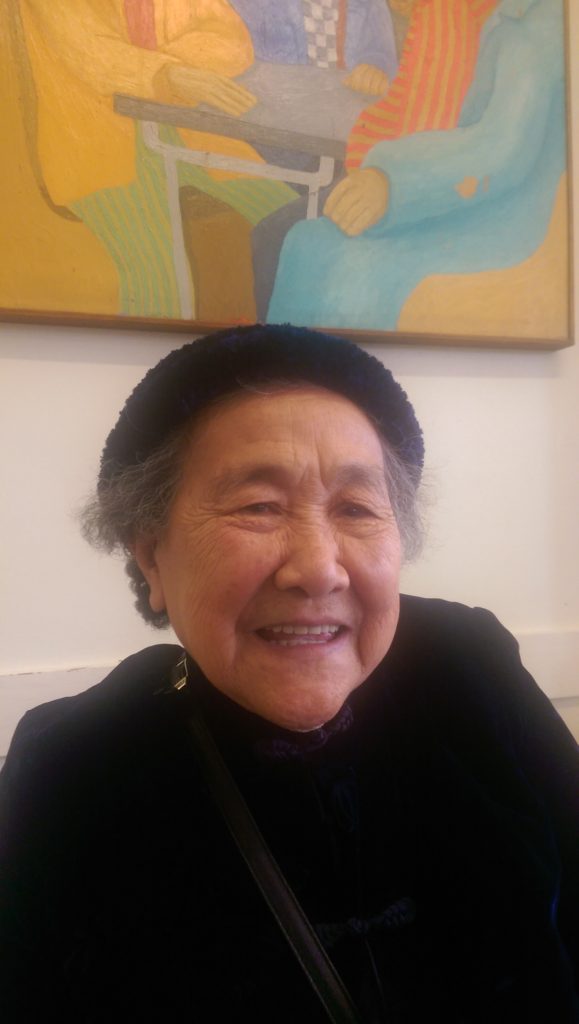 Mrs. Kong, who goes by 鄺太 (or Kong Tai), has lived in BC Housing in Vancouver’s Chinatown neighbourhood for over 20 years. I met with Mrs. Kong to speak more about her experience as a Chinatown resident and a member of the Chinatown Concern Group.

How did you first get involved with the Chinatown Concern Group?

I got involved when the Chinatown Concern Group first formed. I come to Carnegie to sing in a choir. King-Mong (an organizer with the group) found me through the choir. When my husband was still sharp (Mrs. Kong’s husband passed away in 2015) he told me that I should keep going because it seems like a good community. He was scared that I would just stay at home.

Last week the City of Vancouver hosted the Re:Address international housing summit. Single day tickets to hear the mayor and expert panels speak cost $370. I heard that you tried to attend City’s housing conference with other members of the Concern Group last week?

Yes, the tickets were $375. Where are we supposed to get that money? How can regular common people afford it? How can they it’s an international forum when people can’t even represent their group? They were really exclusive. We don’t even have enough money to buy one ticket right now so [when I tried to go in] I said they should just take [the price of the ticket] from my head tax.

Do you draw similarities between the head tax and what’s happening in Chinatown today?

Yes – it looks like the government has not stopped discriminating against Chinese people, especially the poor and vulnerable Chinese people. The federal government has made an official apology for the head tax and has recognized that it’s wrong and racist. But a lot of families still can’t get compensation. They’ve been hoarding that head tax money. It was $500. It was a huge amount back then. Where has this money gone?

The Chinese Worker’s memorial at Keefer and Columbia, it’s for the Chinese-Canadian soldiers, those who built the railroad, and for the workers who built Chinatown and the country. My husband’s grandfather who built the railroad, he died during that, we still don’t know where his body is or what happened to his body. That site (the memorial) is important because there’s still a lot of struggling, working-class Chinese today. BC was only able to join Canada because we built the railroad all the way here. A lot of people still don’t accept Chinese people or think that we’re just here to take their resources and things but we fought in the war for Canada.

It’s heartbreaking to see all these stores closing in Chinatown because a lot of them have been in the neighbourhood for a long time and a lot of people like me have personal relationships with the storekeepers and the workers. You used to be able to get everything in this community. There was a place that took passport photos. It was really important for a lot of immigrants because their status changes a lot so they always need pictures taken. We had all the grocery stores and herbal stores, cafes, a variety of restaurants to eat dim sum or dinner. Some of the doctors have moved away too. Chinatown right now doesn’t have a seniors building.  No matter where you’re from seniors need a lot of support. A lot of seniors are very isolated.

You spoke about how you live in Chinatown but that your friends can’t afford to live in the neighbourhood. Can you talk a bit about that?

Yes, I live in BC Housing so it’s more stable. But in some of the SRO hotels I’ve had friends who’ve had to move away or who’ve been renovicted. I don’t know where they’ve gone to. Or I rarely see them now in Chinatown.

Right now the government does not respect Chinese people. It would be so beautiful to have seniors independent living at 105 Keefer Street. It’s next to the cultural centre and it has historical significance because of that memorial statue. And it’s right in the heart of Chinatown. It will bring the liveliness back.

The Police Are Not Our Friends

Queer Youth Defence Network: Organizing against homophobia in the suburbs

Making space for community self-defence: An interview with the Whalley Centre’s Wanda…

“I believe in the future”: A Black Indigenous woman’s struggle for home, family, and…