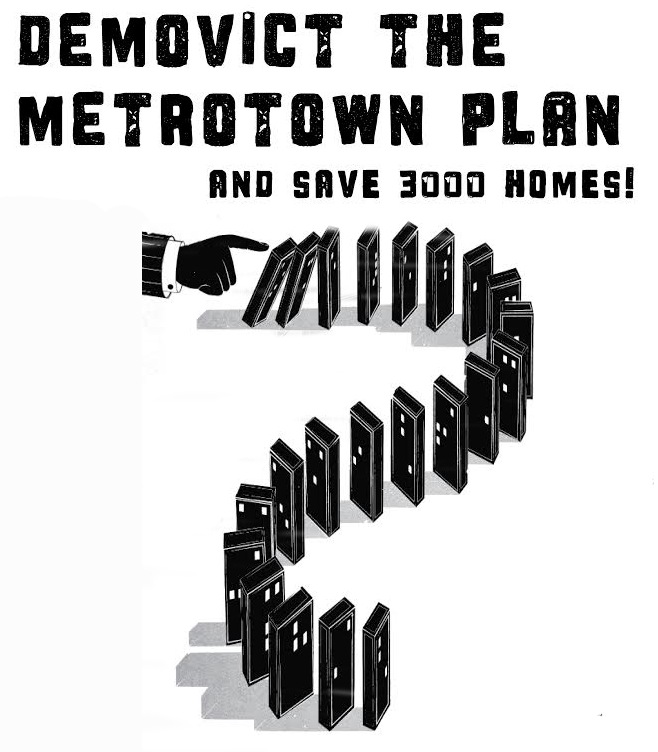 This Saturday November 12th marchers will take the streets around Metrotown to protest against the city of Burnaby’s proposed “downtown” Metrotown plan. The plan will fundamentally change the character of the neighbourhood, which is primarily made up of renters, who are lower income and more vulnerable to displacement and homelessness that the average in the Vancouver suburb. If passed, the plan will replace the predominately three-storey apartment buildings (which all together contain about 3,000 apartment units that rent at the low-end of market) with condo towers that current residents cannot afford.

To stop the plan from passing, the Stop Demovictions Burnaby Campaign is hoping to mobilize renters from all of the Lower Mainland. Although the 6,000 people who now live in the target area will be the first affected by the Metrotown plan, its implications are far greater. As everyone who rents in the Lower Mainland knows, when we look for new places to live we don’t restrict our search within municipal borders – we look for the apartment we can afford. If Burnaby renters lose 3,000 apartment units, we all lose 3,000 apartment units from the overall rental stock. If you are not a Metrotown resident today, you could be tomorrow… unless they’re all demolished. The fight to stop the Metrotown plan is our fight, no matter where we happen to live as it goes to vote.

A call to action

Now is the time to stop the Metrotown Plan. There are four things you can do to help. 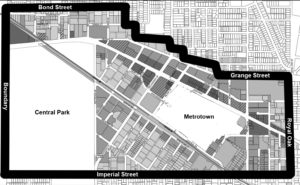 1) Endorse the messages from Metrotown renters

We are asking for your community group, union, or faith group to write to organize@stopdisplacement.ca to endorse the following message. It is likely that the Plan will go to vote at the end of November and we plan to release a list of endorsers for these demands in the third week of November. Send your endorsement soon!

Demovict the plan! Save three thousand homes: Burnaby’s proposed “Downtown” Metrotown Plan will directly cause the loss of 3,000 purpose-built rental apartment units and the displacement of thousands of current residents. We call on Burnaby Council to reject the plan and go back to the drawing board to develop a plan in partnership with the affected community. While we recognize that no municipality can solve the housing and homelessness crisis on its own, Burnaby’s growth strategies must not come at the cost of displacing the existing community.

Placement before displacement: Hundreds of renters are already scheduled to be evicted through rezonings permitted under Burnaby’s old Metrotown plan, and Burnaby’s existing tenant relocation supports are inadequate. We call on Burnaby council to ensure every renter is placed in new housing they can afford before they are displaced from their existing homes.

The Stop Demovictions Burnaby Campaign has petitioned door-to-door and on the street in Metrotown and we hope to submit our petition to Burnaby Council with the call to stop the new plan. While our focus for the fall is on stopping the Plan, demovictions have become a crisis under the old plan so we also must continue to call for a moratorium on Burnaby’s rezonings of rental apartments. Sign and circulate this petition. 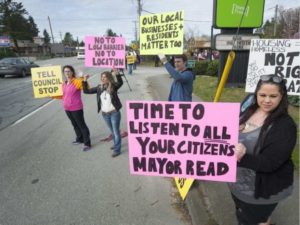 3) Come march in the demonstration on November 12

We are calling for a big demonstration on Saturday November 12, 2pm starting at the Metrotown Skytrain Station to give a message that there is widespread opposition to the “Downtown” Metrotown Plan, and that it is more than a Burnaby issue. We are asking supporters to circulate the call-out and poster, to make your own banner, and to come march together to save 3,000 homes.

4) Contact Burnaby City Councilors and ask them to vote against the plan, and NDP housing critic David Eby for him to speak out against Corrigan’s plan

Burnaby City Council is controlled by the Burnaby Citizen’s Association (BCA) party, which is a municipal wing of the NDP. That’s probably why the BC NDP has not spoken out against Mayor Corrigan and Burnaby council’s policies. When NDP housing critic David Eby has spoken about demovictions it has been to blame the Province, which is the same fraudulent buck-passing that Mayor Corrigan has been doing in order to deny that it’s his city hall that controls rezonings and development in Burnaby.

Contact Burnaby City Councilors to ask how they intend to vote about the Plan and to encourage them to vote no:

Contact the BC NDP’s official housing critic David Eby and ask him what his position is on the planned loss of 3,000 units of rental housing in Burnaby and whether he will speak out against it before the plan passes:

The Police Are Not Our Friends