Tent Cities: Fighting displacement when there’s nowhere else to go 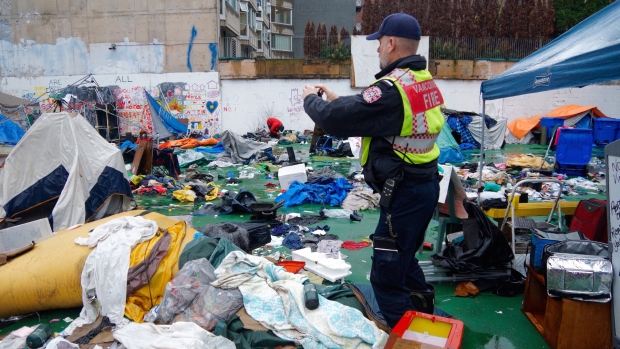 On Thursday, November 3, I had the privilege of watching occupants of the homeless encampment at 58 West Hastings demonstrate their resilience yet again, winning a 10-day adjournment that postponed the City of Vancouver’s application for an injunction to have the tent city removed.

The City has argued that the encampment of nearly four months presents grave health and safety concerns and is unnecessary given that campers are being offered interim shelter space until more permanent housing plans take form. Campers have been resistant, taking up the site’s legacy in demanding real housing justice.

Robert H., a resident of the encampment, stood in front of a BC Supreme Court judge to argue that the few remaining campers need more than a mere 24 hours to seek legal counsel after being served notice of the hearing. The Court agreed.

“We didn’t have any time to prepare,” Robert told me outside the courtroom. “I don’t know why the City is being so insistent about kicking people out right now. It’s just going to make people’s lives more difficult.”

At its peak, the encampment was comprised of an estimated 80 individuals who would otherwise have been without a safe place to sleep, attend to personal needs, and store belongings. After being issued eviction notices by the City in late October, however, fewer than 10 remain.

A drop in occupancy must not be confused for meaningful change: while some campers were moved to mats on the floors of emergency shelters throughout the Downtown Eastside, many more continue to be homeless and have been forced to seek other outdoor locations due to access barriers such as low-income status and disability.

Amidst a national housing crisis, courts are being asked more and more frequently to weigh in on cases involving tent cities. The good news is that in BC Court decisions likeVictoria v Adams, Abbotsford v Shantz, and British Columbia v Adamson, courts have refrained from issuing injunctions to dismantle homeless encampments in circumstances where occupants have nowhere else to go.

Significantly, in some of these cases, courts have been clear that a ‘place to go’ does not mean a mat on a floor.

In Shantz, it meant recognizing a need for flexibility and accessibility in housing: accommodations that meet people where they are, regardless of and because of the barriers they might face due to socioeconomic status, addiction, physical and mental illness, and/or relationship status. In Adamson, it meant preventing the City of Victoria from removing campers from the courthouse lawn until social housing promised by the provincial government was in fact made available.

Occupants at 58 West Hastings have been vocal about the fact that the City’s immediate offer is not a solution. Emergency shelters, they say, fail to address the root causes of homelessness and oftentimes provide homeless individuals with less security and stability than a fixed encampment.

“I don’t use shelters,” said Robert. “Shelters are just as bad as the street for a lot of us. There’s nowhere to store your stuff and it gets looted if you don’t watch it. It’s exhausting. And the hours—you have to pack up your things and be out first thing in the morning every day.”

For many of those who reside or resided there, the encampment offered a sense of community, safety in numbers, and regular access to service providers and resources. Most importantly, it equipped its occupants with a powerful voice against what has become an ever-more silencing routine of displacement in the City of Vancouver.

In the face of no meaningful alternatives, it has been home.
*Originally published on the Pivot Legal Society website