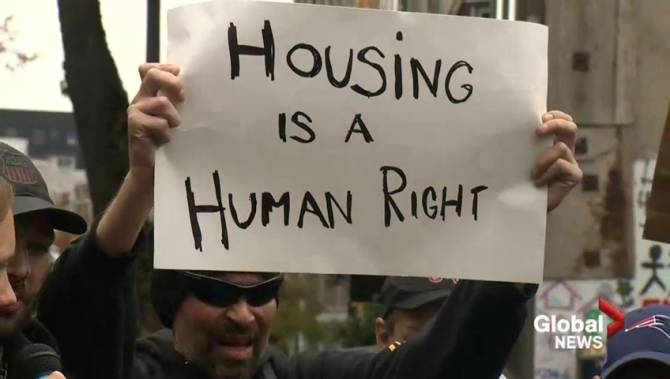 From the affidavit of Rob, Resident of 58 W. Hastings Tent City

I am currently homeless. I have been without a fixed address for about 3 years. I know that I cannot afford housing in Vancouver. The only accommodations available are worse than living outside. I feel that it shouldn’t even be allowed for people to live in some of these places.

I was diagnosed somewhere between 1995 and 2000 with Hepatitis C. I don’t take medication for it. I don’t have a regular doctor.

On November 3rd 2016, I was at the BC Supreme Court and argued for an adjournment against the City’s application for an injunction to remove the tent city from 58 West Hastings. The Court granted us 10 days to find legal counsel.

Homelessness is the constant threat of theft and violence

For a lot of people living outside, there is a constant threat of theft. It’s really hard to keep your own belongings. Even for someone like me who can take care of myself, there is still a threat of theft and violence.

I have stayed at the UGM Shelter and the Aboriginal Shelter. A lot of the shelters don’t allow you to keep your belongings there during the day. Lots of stuff gets stolen from the shelter. I have lost many of my belongings, including everything I’ve owned, numerous times. I’ve lost many phones in the process of moving in and out of shelters. People pull things right out of your pocket.

At the Aboriginal shelter you can only keep minimal belongings. Having to pack up all your belongings every day, hauling around fifty or sixty pounds of stuff is exhausting; it’s like working for free. It’s very stressful. You spend a good portion of your life looking for things and losing them again. I’m always getting upset, freaking out and getting angry because I lose my belongings and can’t find things. It never ends. It goes on and on every day.

There isn’t one day that goes by without losing some of my stuff or having it stolen. I don’t have a good short-term memory and so I lose things often.

58 West Hastings allows me to exist without worrying about people stealing from me. I might get something stolen occasionally, but my belongings are definitely safer there.

A community struggle for decent living conditions at 58

Some of the people at 58 West Hastings look out for each other. If someone I know asks me to look after their stuff I will. If I see someone who I don’t know going near it, I make sure they get away.

I contribute to the site at 58 West Hastings by helping to clean up. I’m always doing stuff, it needs to be done. I pick up garbage and I used to spray the portable washrooms out with a hose and soap. Maria [from the Carnegie Community Action Project] and I worked together to clean up.

There is no bathroom on site anymore. There is no one to come clean up the garbage from the City either. The grounds are covered in feces and rig boxes. It’s nasty. There is drug paraphernalia everywhere.

I don’t know of anyone coming onto the site to help out except Maria from the Carnegie. She comes in to help clean up and carry out garbage. The City came and asked how they could help us. I told them we needed thick garbage bags, since the garbage is heavy and wet and the garbage bags we have just break. I told them exactly what we needed and they never came back with them. I also asked for pitchforks because we can’t pick up garbage with a garden shovel. We don’t have gloves to pick up garbage.

There are sharp needles lying around that can easily poke you. For people living on site who try to clean up there are big safety risks. About 10 days after I started living at 58 West Hastings, I got poked by a used needle through my shoe. It broke the skin and my toe was bleeding. I went to Insite and they told me to go to the hospital to get ARVs.

I attended to an overdose about 10 days ago at 58 West Hastings. I happened to be sitting there. It was 5am and no one else was around. I watched a guy mix his shot up and as soon as he took the needle out he started shaking all the way down to the ground. He hit the ground and went out of sight. I rushed over there. I saw him laying on the ground, I slapped him on the face and pinched him but he was totally out. I don’t even know if he was breathing.

I ran around asking for Narcan because he was overdosing. I ran all over the place yelling that someone was going to die. Someone came out of a tent with Narcan and gave it to him. As soon as that happened I called 911 and they came in about 10 minutes and they took him to the hospital. If I hadn’t seen it, I know that no one else would have seen it. He was in a spot where no one would stop to see if he was ok. It was because we were at the same site that I was able to respond.

People from the Carnegie offered me housing on the day before the injunction hearing. They haven’t said where the housing is. No one knows when it will be available. It apparently still has to be approved by BC Housing. I am still waiting to hear back.

Tent Cities: Fighting displacement when there’s nowhere else to go