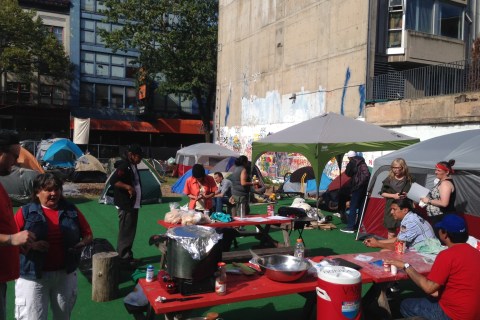 From an affidavit from an anonymous woman resident of 58 W. Hastings

In 2014 I moved to Grande Prairie, Alberta to live with my father and try and recover from my struggles with addiction. My father became physically abusive and in December of 2015 I was forced to flee. I went to stay in a shelter at the Rotary House in Grande Prairie. In the shelter everyone stayed on mats or beds that were close together in wide-open rooms. I could not emotionally handle being in the shelter. I began to have panic attacks, including hyperventilation, vomiting and blacking out.

Because I could not stay in the shelter I returned to Vancouver in December 2016. I have some friends and family here who I was able to couch-surf with for a time, but they were increasingly unwilling to host me. I repeatedly applied for housing but was denied over and over because I was on income-assistance and because I have a dog. I started going to various social organizations to get help applying for housing but I was repeatedly told that I could not get a housing advocate because I was not living in a shelter. But I could not go to a shelter because of my mental health.

In mid-October the city posted a notice saying that everyone at Tent City had a week to leave. We were promised shelter beds but eventually I was told that Mike and I would have to go to different shelters. I refused. Mike is a primary source of support for me. There are very few people I feel safe with. I have suffered a lot of abuse in my life.

Eventually we were offered a spot at New Fountain Shelter by BC Housing but when we arrived there was only a single cot in a small room with three other men. There were bed bugs and cockroaches everywhere. Mike went to stay on the street because there wasn’t enough room on the cot. I couldn’t sleep all night, my anxiety was horrible. We returned the next night and were given chairs to sit on in the hallway. After several nights of this treatment we returned to Tent City.

While Tent City is far from perfect and I desperately need proper housing, it has greatly improved my life situation.

The same social organizations which were unwilling to help me before were now willing to help me apply for housing. Now that I am not shuttling around from couch to couch I have the stability to actually attend their offices and go for follow-up meetings. And they know where to find me when we need to take the next steps on my application.

I still struggle with anxiety but it is manageable because when I start to panic I can return to my tent, sit with my dog and spend time with my partner, and calm down before I reengage. I am able to stay with my partner, Mike, who I have been with for 6 or 7 years. Many shelters and housing options are single-gender.

I feel safe at Tent City. I am able to lock my things in my tent and I haven’t had any issues with theft or violence. People are respectful and supportive. I struggle with addiction and I feel safer at Tent City. If a person is over-dosing all they have to do is yell “Narcan” and everyone comes running. People administer Naloxone, call 911 and start giving CPR. I have seen people’s lives saved.

I have a daughter. Ultimately I would like to be able to have a house where she can stay with me, but at least now she knows where to find me and I have the stability to plan meetings with her so we can maintain our relationship.

City of Vancouver returns to court for an injunction to break up the lifesaving tent city at 58 W. Hastings