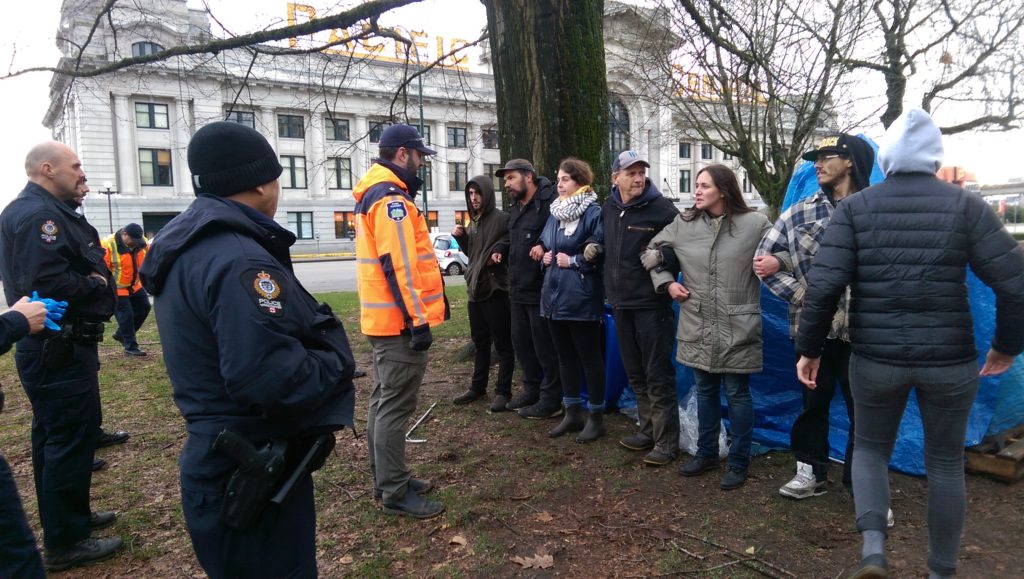 Around 9:30 am on the morning of November 25, 2016, police arrested seven people at the new Thornton Park tent city beside the Pacific Central Skytrain; one homeless resident and six supporters. Since the arrests all seven people arrested have been released.

City park rangers delivered notices to residents instructing them to take down their tents because of a bylaw that states that tents must be removed from public parks by 9am. Tent city residents and supporters linked arms to defend the shelters as park rangers, backed by 20 police officers, attempted to dismantle tents and temporary shelters. Police used unnecessary force to separate residents and supporters, pulling and pushing bodies and throwing people to the ground. Seven people were eventually handcuffed and taken to the Vancouver jail on Cordova Street. During the arrests supporters and residents cheered “HOMES NOT JAILS! WINDOWS NOT BARS!”

Supporters and residents hosted a press conference outside of the courthouse at 5pm Friday evening in solidarity with the one remaining supporter who remained in custody until 9pm this evening. At the press conference residents spoke about their experience being homeless and the treatment they receive by police.

Daniel, one of the seven people arrested, spoke about the criminalization of the poor: “The police arrested me for protecting my stuff, for being homeless.”

Andrew, a resident who had moved from 58 W Hastings the night before, explained how the criminalization of the poor has long-term effects on the lives of the homeless: “People who just need a place to live can end up with a criminal record and so they can’t get a job, they have to steal just to eat, or they get arrested for illegal camping.” 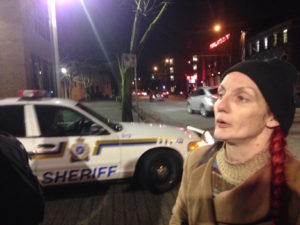 Michelle spoke about the punishingly low welfare rates and how they push people further into poverty: “For someone who isn’t able to work anymore, like myself, with the amount that they give you, nobody can live on that and survive. You have to think, ‘Do I eat today?’”

All of the residents who spoke discussed government inaction. Daniel stated, “Shelters aren’t a solution, they’re just bandaids.” Michelle spoke of her experience in SRO hotels: “SROs are dirty and infested. I’ve heard stories of people getting sick from rats.” Andrew spoke to the lack of action that governments have taken: “We deserve to have safe housing, clean houses. And we deserve solutions, not promises.” Andrew’s final comment reminded the crowd of why we must continue to fight: “We are human beings – we all deserve a safe, warm, clean place to live.”