This is an edited version of a talk delivered at “The Housing Crisis is Global: Anti-Imperialist Perspectives on the foreign investment myth” panel discussion organized by Alliance Against Displacement and Chinatown Action Group, November 22 2016.

Beverly Ho: Our talk tonight is focused on anti-Asian racism because it’s very obvious, especially in its recent heightened and overt form that it has taken, and in light of the recent election of Donald Trump as well as in light of how the housing crisis is occurring. To connect it to Chinatown, where I work with Chinese seniors, the foreign investment myth, just like the model minority myth, may seem like they’re not that harmful, but they both profoundly and very negatively affect Chinese residents. 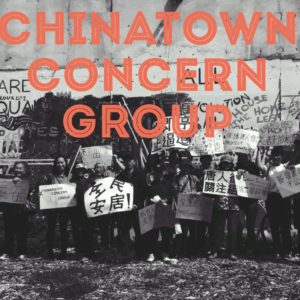 Gentrification and displacement in Chinatown

Specifically, in the Chinatown neighbourhood there has been unprecedented development and displacement, especially of low-income residents. Many shops serving the low income Chinese community have closed down, and I’m sure if you’ve been to Chinatown you have seen the drastic changes that are occurring.

Last week, the Chinatown Concern Group spoke up against the discriminatory policies and undemocratic practices of the City of Vancouver. Most of our members are working class and female Chinese seniors who only speak Chinese. Specifically, Chinatown Concern Group addressed two open houses that the City held last month, regarding the Chinatown Economic Revitalization Action Plan. Like a lot of open houses and consultations that the City of Vancouver does, there was very inadequate translation and interpretation provided. They also used vague and exclusive planning terms and vocabulary that was hard to understand. And there was tremendously low turnout: only 80 people showed up to the two open houses that were meant for all of Chinatown. This is because many of our members who we have spoken to said they didn’t receive any notices about these open houses, even though many of them wanted to attend. They were purposely excluded.

This is concerning for us because they are the most vulnerable and at risk. Chinese seniors also have the biggest stake in Chinatown because it’s their home and because it’s a very culturally specific place that they need.

The City has heard a lot of opposition to the Historic Area Heights Review, which was passed in 2011 and attracted a lot of developers to the area. Though they heard a lot of dissenting voices, they have not addressed these voices and their concerns in the policy review. There will be only 20% affordable housing; they said “affordable” but this could mean $800/month or more for rent. It won’t be at pension or welfare rate.

So the press conference that Chinatown Concern Group held in response to this centred marginalized voices and put a new narrative into mainstream media. It emphasized the way vulnerable communities have not been a part of the policy process. It questioned how policy consultation processes are structured when the most affected are not included. 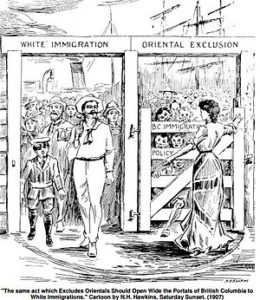 The foreign investment myth is rooted in racism, and racism plays out in very real and violent ways against low-income Chinese seniors in the neighbourhood. Many non-Chinese residents, because of the media or internalized racism, hold prejudiced and harmful assumptions about Chinese people. A lot of Chinese people are assaulted on the streets and in food line-ups, and many don’t feel safe in their own homes and neighbourhoods.

Racism divides poor people, and not just the Chinese community. Poor people are disproportionately affected by racism. The particular kind of anti-Chinese racism that seniors we work with experience, and the way that Chinese people are “foreignized,” isn’t new and it hasn’t ended. Many people think that we’re post-racial, and that’s not true.

Historically, the government sanctioned racist policies like the Chinese Head Tax and the Exclusion Act. Today, policies in Chinatown encourage market development and gentrification. Gentrification is often seen as “natural” or as progress, something necessary to clean up a city. In reality, gentrification is displacement and it’s putting people’s lives at risk. It has a huge impact on people’s mental and physical health.

In the City’s supposed consultation process with residents, Chinatown Concern Group was also concerned about the choice of language used by the City. For example, the words “consultation” or “open house” or “revitalization” should be words with positive connotations, but the City has twisted these words and used them as covers for their displacement policies. “Revitalization” is also an inaccurate term; Chinatown is not dead.

In Chinatown, the housing crisis that we see is not caused by foreign investment – it’s caused by local developers. It is led by WestBank Corporations, Beedie Living, Bosa Properites, and the Prospero Group. These B.C.-based developers are the real groups contributing to the housing crisis and increasing property prices.

Now, we see that the new manifestation of racism, particularly anti-Asian or anti-Chinese racism, is the foreign investment narrative. Capitalism is also founded in racism, displacement, and in taking advantage of the working class. A lot of white settlers see the influx of affluent people of colour and it fuels their xenophobia and resentment. This is because capitalism is supposed to primarily benefit white settlers.

Racism affects people of all classes but it affects poor people the most. In terms of displacement and gentrification as well, these forces affect poor people the most. Growing up as a person of colour and as a Chinese person, somehow our communities believed that we can escape racism or prejudice by working hard and moving up social classes, which is a lot like the American dream. We are tricked into thinking that capitalism is democratic or fair and that we all start at the same starting point. But I’ve seen that money doesn’t change the colour of your skin.

Stephanie Fung: Foreign investment has happened in the past in other parts of the world, which we can trace back to imperial conquests of Europeans and later North Americans. And it continues to happen today and not just in Vancouver; it’s happening in cities in Asia such as Hong Kong, Singapore, Beijing, and Shang Hai. These cities are going through a global housing crisis and they’re also addressing it in different ways. Globalization has been happening for a while and in places across the world. 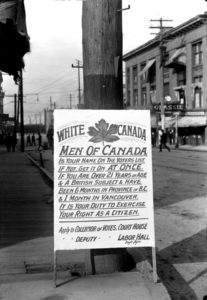 The main question I’m interested in tonight is how do racism, capitalism, and settler colonialism inform each other in the context of Vancouver’s current housing crisis and foreign investment today.

The first part I want to talk about is the history of anti-Chinese racism in Vancouver within a settler colonial context. As Beverly touched upon, Chinese migrants in Vancouver have long been subjected to racism, including the race riots of 1907; the Head Tax of 1885, the Chinese Exclusion Act of 1923. What is interesting to me is how these histories have influenced present day experiences of Chinese people as associated with money and with capital. We can see how racism has been used as a tool by white settlers to reinforce this position of Asian migrants as labourers and Asians as part of this settler colonial context, contributing to the displacement and colonization of Indigenous peoples.

I look to Iyko Day’s claim that Asians have been racialized through capitalist settler colonial projects. I think it’s important to recognize this because we can understand how these colonial histories have shaped present day racist view of Asians. This is connected to a destructive form of capitalism, and it has influenced the narratives we have today about Chinese immigrants taking over the housing market. These narratives have antagonized Asians and have caused divisions across marginalized communities. The association of Asians with negative capitalism has allowed white settlers to gloss over and erase their complicity with capitalist exploitation from collective memory and history. 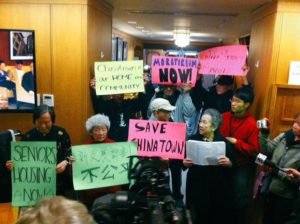 What can be done?

One of the biggest questions that I have is what can be done, and how do we relate the displacement that is occurring in Chinatown to wider forms of displacement that affect many different people? I think there are two ways that we can start to address these issues and expand housing security.

Secondly, more inter- and intra-community dialogues need to happen that involve the most vulnerable. Open houses aren’t enough and they are imperfect vehicles for housing justice. By intercommunity, this means we must recognize that the Chinese community in Chinatwon is not homogenous. There are diverse players, leaders, and groups within this community with different class interests and views of what Chinatown should look like. Intercommunity conversations across generations that involved low-income working class seniors’ voices especially is crucial. In other words, the Chinatown Action Group is interested in working with those in the Chinese community who are invested in fighting for those who are most marginalized and oppressed.

By intracommunity, I mean that conversations need to happen across communities. The issues of gentrification and displacement happening in Chinatown and in the Downtown Eastside are connected to what is happening in many different neighbourhoods across Vancouver, in Burnaby and the Metrotown neighbourhood, near Joyce Skytrain Station, and in the Renfrew-Collingwood neighbourhood. In these conversations that we’re having, we need to address the root causes of poverty, displacement, and gentrification. More than anything else, we need to have a shared analysis of these structures of power and processes of settler colonialism, imperialism, and global capitalism.

Ultimately, we need to organize for social justice to address the structural issues in society. It is about building a community that wants to get to the root of social problems, and it is about having conversations with people on the ground and trying to move them to our side of justice. So if we want to talk about concrete actions, this could mean working with Chinatown Action Group, participating in discussion groups, and listening to Chinese seniors and building relationships with them. We must speak about displacement within our own communities.

What we need to focus on is building stronger cross-community alliances across the city and building a deeper collective analysis of what is happening in order to take action for housing justice and ensure that everyone has access to safe and affordable housing.

何盈欣 Beverly Ho is a Chinese settler artist and organizer born and raised on the west coast with ancestral origins  in 三水 (Samshui)，廣東 (Kwangtung) and 常州 (Ch’ang Chou), 江蘇 (Kiangsu). She is grateful to be working with and constantly learning from several groups in the neighborhood, including Chinatown Action Group, the Alliance Against Displacement, Chinatown Concern Group, and Youth for Chinese Seniors.

馮葉 Stephanie Fung traces her family’s migratory routes from 廣東 Guangdong, where her grandparents lived until they fled to 香港 Hong Kong during the Japanese occupation of China in World War 2. Her parents later migrated to Turtle Island in the late 1980s. Stephanie lives, works, and creates as a visitor on the unceded territories of the sḵwx̱wú7mesh, sel̓íl̓witulh, and xʷməθkʷəy̓əm nations, where she supports the struggles of marginalized communities in Chinatown with the Chinatown Action Group. She also works for the UBC Asian Canadian and Asian Migration Studies Program.