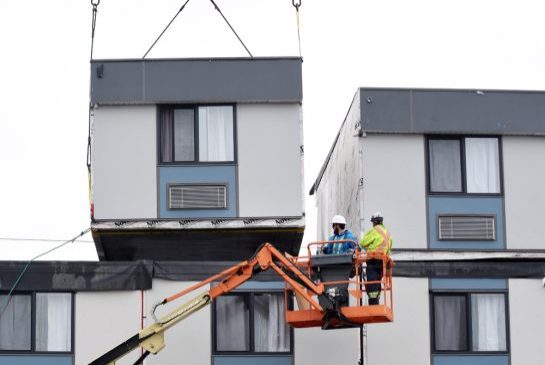 Vancouver’s first modular housing building, a housing model borrowed from mining companies, is set to open in mid-February this year. The building, which is located at Main and Terminal, will provide 40 self-contained units for singles. Like the Quality Inn Hotel, which is set to close at the end of this month, the project is temporary and will only be open for five years or so, until the modular housing is dismantled so a condo tower can go up. The premise of the project is similar to the Quality Inn, which the Vision Vancouver-dominated City Council opened to house the residents of the Oppenheimer Tent city, and which is set to close soon. The modular housing will provide temporary housing for low-income tenants until they can move into permanent housing that does not exist.

Because of its low-cost and rapid construction, the modular housing model has been celebrated by mainstream media as a new innovative approach to the housing crisis. The 40 units were built in less than 30 days and installation only took six days. Each unit costs $80,000 to $90,000 to build, which is considerably cheaper than the $200,000 needed to build a permanent housing unit on city owned land. The building can also be dismantled, transported and re-assembled on another site that’s not being used or awaiting development. The units are 250 square feet in size with a private bathroom and kitchen, and they have a lifespan of up to 30 to 40 years. This kind of readiness is good in a pinch, but do modular homes offer solutions to our homelessness crisis? 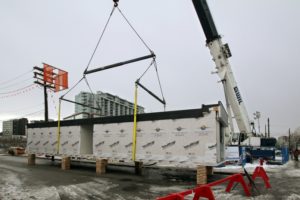 While the units will provide a small amount of desperately needed housing, we should be wary of what the project means for housing policy in future years. The building comes as the latest in a long string of temporary quick-fix solutions aimed at address the escalating housing crisis.

The 157 unit Quality Inn hotel was opened in 2014 to house the homeless residents of the Oppenheimer Park tent city. Instead of moving into new and permanent housing, most of the Quality Inn tenants have been relocated to old SRO hotels. Others have nowhere to go.

Unlike the Quality Inn Hotel, where all the rents were set at $375, it is not clear yet if people on social assistance will actually afford the rents in the new modular housing on Main Street. According to Vancouver’s chief housing officer Mukhtar Latif, the rents will be up to $800-$900 per month. These rents are only slightly below the market rents for similar sized units, and are far out of reach for low-income people on social assistance.

The City says it is working on providing subsidies to bring down the rents to the $400-600 range, but it is still unclear if any and how many of the units will be affordable to people on welfare and pensions. 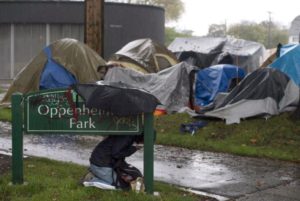 It is not clear where the tenants will be relocated when the project is dismantled. While a handful of new social housing units are set to open in the coming years, they are far from enough and will only house a fraction of the people who are currently homeless or at risk of homelessness. In 2016, only 11 social housing units at welfare rate opened in the Downtown Eastside, which had almost 1,000 homeless people counted in 2016. We can expect similar numbers in the coming years.

Most of the new city-owned social housing is also not affordable for people on social assistance. According to a recent Mainlander article, less than 6% of the city’s new “social housing” is guaranteed for people on welfare. A large proportion of this housing is also out of reach for the 51,000 renter households who make below $25,000 per year and who are experiencing the brunt of the housing crisis.

There is also a risk that more temporary quick fix solutions will take pressure off the government to build actual social housing. Vision Vancouver’s focus on ending street homelessness by building shelters has overshadowed and detracted from permanent homes; modular homes may be a further elaboration of this trend rather than a new tool to end homelessness.