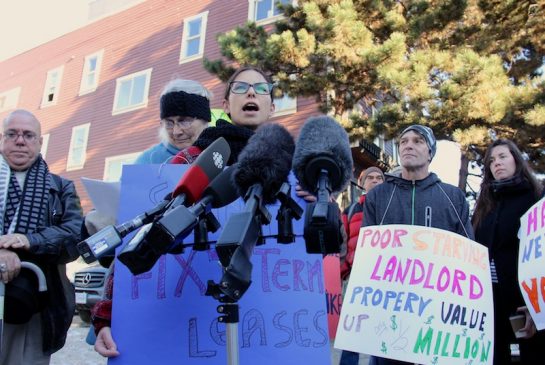 “The manager bullied me and said “sign or you leave,” Humberto Macias-Carracas told people at a news conference in front of the Ross House on Alexander St. on New Year’s day. “I can’t see, I don’t even know what I am signing. I have nowhere to go, I am going blind, I don’t know what to do. They do whatever they want. I don’t have any family, I don’t have anybody.”

Downtown Eastside landlords have discovered a new tool for evicting tenants and increasing rents that could result in many more homeless people. The landlord at the Ross House on Alexander St. is using Fixed Term Leases to evict tenants and raise rents by up to $210 a month. The landlord actually said in a statement to the media: “The method we use to try to control the tenants… is the fixed term residential tenancy agreement which is provided for in the Residential Tenancy Act.”

Right at a news conference on Jan 1, the Ross House landlord deactivated the key fob of one of the tenants, Aurora Dunkley-Johnson, who was speaking out against the injustice. This meant Aurora couldn’t get into the building where her room was unless another tenant let her in, which they did. Later the landlord evidently realized her action was illegal and reactivated the fob. Aurora and other tenants, trusting their landlord and not knowing their rights, had signed a fixed term lease that let the landlord evict them or raise their rents after 2 months. Rumours are that other DTES landlords are asking tenants to sign these leases, or to initial the box on the Residential Tenancy Act form that allows the landlord to fill in the rest of the form and then evict tenants at will, or raise their rent as much as they like.

“I have lived here for a year and my rent was $500, Michael, another Ross House tenant, told the news conference.” My rent went from $500 to $660 and we were pretty much stuck paying it or moving out. There is a really bad homeless situation in Vancouver already and there really is nowhere to go. It is a tough time for this to happen, and it is really hard to find anywhere to move especially around Christmas time,” explained Michael. “I have filled out the paperwork for welfare and I still owe the landlord 50 dollars.”

“I lived here for over 2 years,” said Aurora at the news conference, sponsored by the SRO Collaborative and Carnegie Community Action Project. “I moved in August, 2014. They only brought a lease to my attention 4 months ago. I wouldn’t have signed it if I knew my rights. I just got evicted now for speaking out, the landlord just locked the door on me,” said Aurora. “The landlord says she doesn’t need an order of possession.”

But the landlord does need an order of possession and didn’t have one and eventually let Aurora back in.

“We think we have a legal case for these tenants at the Residential Tenancy Branch,” said Wendy Pedersen of the SRO Collaborative. “This kind of intimidation is not unique for this building, tenants are feeling this across the neighbourhood.” Pedersen is helping tenants get legal advice from advocates at First United Church.

In a statement to the media the landlord compared its SRO rooms with a gentrified SRO in Strathcona that charges $795 to $1095 a month. The statement also slagged people on welfare, suggesting that able bodied people “refuse to work and pay their way [and] feel entitled…”

“We have 1,000 homeless people in the neighbourhood with nowhere for them to live,” said Jean Swanson of the Carnegie Action Project. “We desperately need the province to implement real rent control and get rid of this fixed term loophole or we’ll have even more homelessness.”

*This article was originally published in the CCAP Newsletter