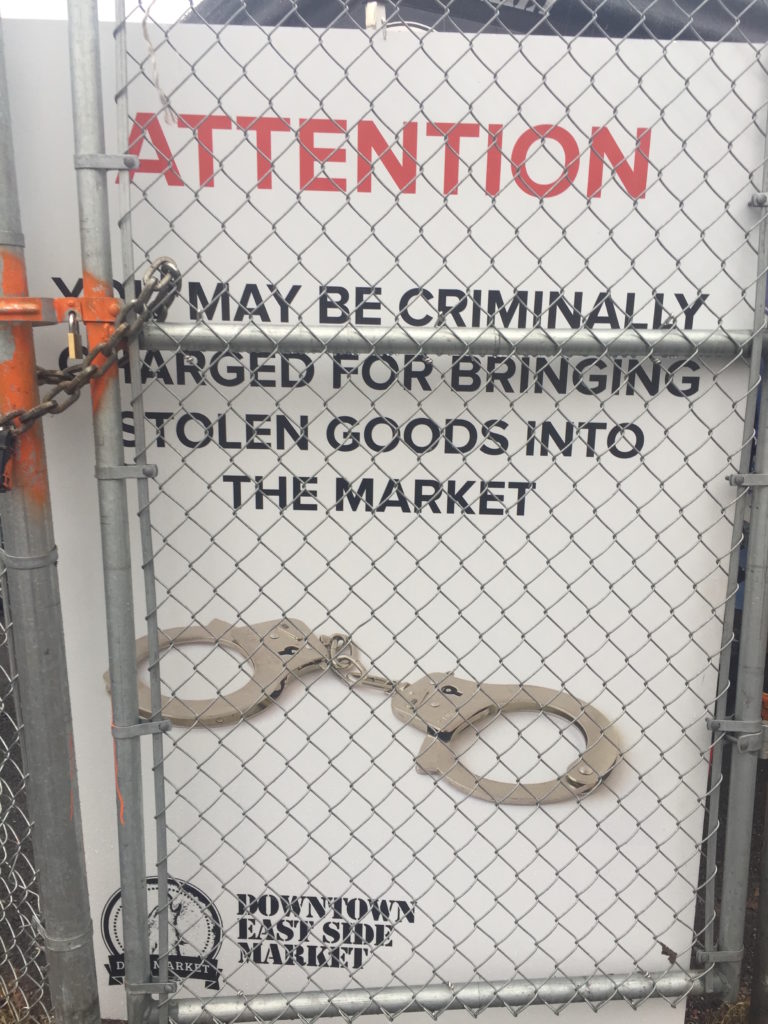 Over 13,000 people are on social assistance in the Downtown Eastside. 5,803 are on disability, 3,068 are on welfare and another 4,000 seniors survive on pensions. Others live on minimum wage or receive no income at all. For many people on social assistance, living on less than $17 a week after rent is paid, the only way to survive is to rely on illicit economies. Because they are poor they break the law with non-violent but criminalized activities. This might entail street vending, panhandling, selling stolen goods, shoplifting, dealing drugs at the street level, doing sex work, and setting up tents on sidewalks or in parks. For many, it also involves doing drugs to survive the violence and trauma of homelessness, poverty and colonialism.

Historically the City’s approach to the illicit economy in the Downtown Eastside has been to criminalize the people involved. But in recent years, with the expansion of harm reduction governance policies, municipal politicians have been conceding that they cannot police-away the illicit survival economies of the poor. The government’s interest in controlling and managing the illicit economy has been increased by the demands of moving along the gentrification of Hastings Street quickly and uninterrupted. To control and manage parts of the illicit economy, the City of Vancouver is folding the informal street-based economy into the formal capitalist economy through entrepreneurialism and social enterprise.

The City’s most recent attempt to manage the illicit economy is a new community economic development plan for the Downtown Eastside. At its core, the plan is an attempt to repackage unregulated economies, which officials are referring to as “survival work,” as a new form of entrepreneurialism. The plan positions survival work and the informal economy as part of what it calls the “self employment livelihoods continuum,” placing low-income survival on the same spectrum as “venture entrepreneurship.” As part of this approach, the plan institutionalizes gated street vending spaces recently established by the City and also includes measures to support social enterprises that work with binners, street vendors and sex workers – with the condition that they agree to exit the sex trade.

Street vendors have different sources for the things they sell, but all are outside legally regulated capitalist production. Those who scavenge through unsafe, unsanitary garbage bins do so without the protections of the labour code or Worksafe BC. And those who shoplift goods are at serious risk of security guard violence, police arrest, and incarceration. The City’s economic development plan only legitimizes street vending at the point of sale, covering up the danger and criminalization of the production of the goods for sale. The DTES economic development “entrepreneurial” framing of street vending is a set-up that covers up the inherent danger of surviving as a low-income person while pretending like it is supporting people.

Even at the point of sale, the publicly visible part of vending, the DTES economic development plan reinforces the criminalization of those excluded from the limited state sanctioned spaces or forms of vending. For example, since the designated gated street vending sites opened in the Downtown Eastside, the police have been cracking down harder on people vending on the street.

Instead of challenging the forces of displacement facing the neighbourhood, the criminalization of the low-income community, and austerity cuts to welfare and social services by senior governments, the message of the DTES economic development plan is that there is no alternative. It pretends that the best we can do is to try to extract some benefits from the forces of displacement through social enterprises and other token concessions by business owners.

To add insult to injury, the plan proposes a useless “shared action calendar” to address the abysmally low and stagnant welfare rate that thousands of DTES residents have to survive on. The report doesn’t mention housing despite the fact that over a 1,000 people are homeless and thousands more live in SRO hotels. How are low-income people supposed to benefit from economic development when they don’t even have a roof over their heads?

With the DTES economic development plan the City of Vancouver is failing to address the underlying causes of poverty. It continues to criminalize the ways low-income people try to survive. The plan tries to package poverty as something manageable, instead of attacking the redistribution of wealth. And when it comes down to it, this plan, like all its previous incarnations, is not about addressing poverty or income inequality. This plan is about controlling poverty and making it palatable to the middle class residents moving into the neighbourhood.