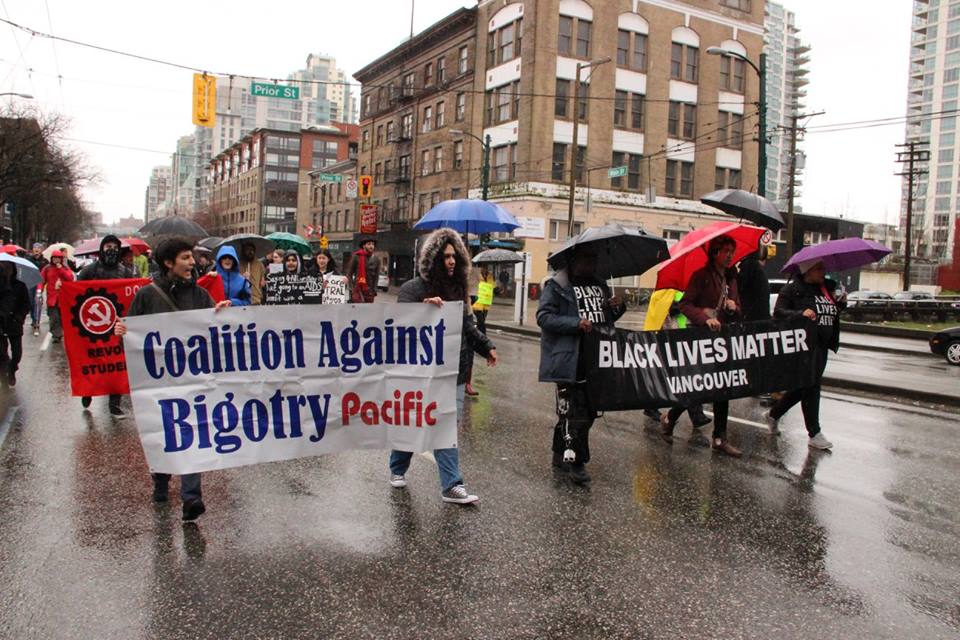 The attack by Soldier Odin on anti-racist protesters on Sunday, March 26th to mark the International Day to Eradicate Racism at Victory Square in East Vancouver is a cause for serious concern. They moved into the crowd aggressively carrying large Canadian Flags and then threw a purple smoke bomb just as Vancouver East MP Jenny Kwan was about to speak.

This is the first time a white supremacist group has attacked antiracists in decades. What is more troubling is that the Vancouver Police Department is failing to protect protesters from these white supremacists.

The Soldiers of Odin claim that they are not racists but their Facebook page clearly calls for shutting down Antifa, whose mandate is to fight fascism. It appears they want to attack Antifa because the group challenges their fascist organizing.

On Sunday, March 19th, thirty Soldiers of Odin members rallied outside Vancouver City Hall and other City Halls across Canada as a part of day of action across Canada to oppose Federal Motion 103 – the motion condemning racism and Islamophobia that passed the House of Commons last week. Soldiers of Odin openly oppose M103 on their Facebook page because it challenges their ability to promote hate towards Muslims and immigrants.

Soldiers of Odin clashed with anti-racist protestors at Toronto City Hall on Sunday, April 1st and police kept the protesters separate. Maple Ridge Mayor Nicole Read has publicly decried groups of Soldiers of Odin patrolling in her community and attacking homeless people since 2015. We are now seeing their presence in East Vancouver and the Downtown Eastside intimidating people it the community. But we have not heard any concern about this from the VPD or the Mayor of Vancouver.

We have clearly seen that white supremacists are not being the treated the same way as Black and Muslim people accused of extremism. Now that M103 has passed, let’s see what the government does about the resurgence of racism and fascism in Canada.

A disingenuous thank you: BC Liberals pose over the bodies of the thousand lost to overdoses