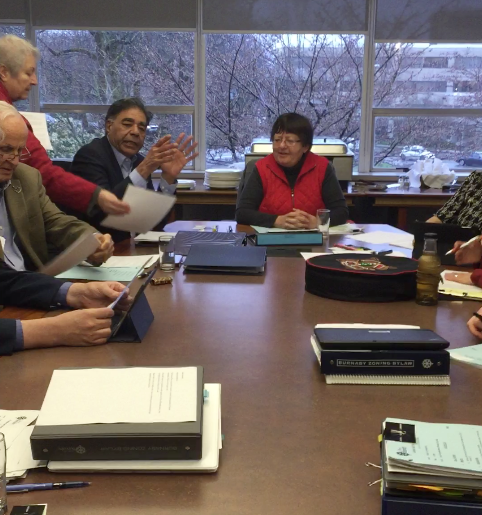 On Tuesday, March 28th, Stop Demovictions Burnaby organizers attended the city of Burnaby’s “Planning and Development” Committee Meeting, ready to share their People’s Tenant Defence Policy. Weeks earlier, organizers had occupied the Mayor’s office which led to a meeting with Councillor Colleen Jordan, chair of the Planning and Development Committee, who assured them that the City of Burnaby would review the current Tenant Assistance Policy at the upcoming committee meeting. When asked if organizers and residents could come to that meeting and speak about the problems with the current policy, Jordan replied, “the meetings are public.” But when Stop Demovictions Organizers took Councillor Jordan up on this proposition, and came together to draft a People’s Tenant Defence Policy to present to committee members, Councillors shut them down and turned them away.

The Stop Demovictions Burnaby Tenant Defence Policy aims to ensure ALL tenants of Metrotown are adequately compensated for their loss of homes and entire neighbourhood that developer-friendly Burnaby is responsible for. The Tenant Defence Policy goes beyond ‘assistance.’ “Tenants cannot be ‘supported’ to find housing that does not exist because this Council is systematically destroying it,” the policy draft explains. “Tenants must defend ourselves against a profit-driven real estate market that turns our homes into investment commodities and landlords and governments that treat us as temporary sources of extra income and inconveniences.” Compensation needs to go much farther than merely a few months of rent payments, but rather needs to ensure that tenants are guaranteed affordable housing where they are comfortable, and that they have adequate support systems to substantiate any financial compensation. Housing is more than a roof over one’s head, and this is what the Burnaby Tenant Defence Policy highlights in its key points: 1) Placement before displacement; 2) Compensation as redistribution and disincentive, and; 3) Independent tenant defence organizing. See the full People’s Tenant Defence Policy below.

Organizers arrived at this meeting hoping to have their voices heard. A public committee meeting should be a space where the public can come forword and be heard. Instead the organizers walked into an already hostile room where they were met with condescending disrespect. After organizers sat and waited patiently and quietly, Councilor Jordan moved for a review to be made to the Tenant Assistance Policy. She explained that this was in following with the meeting she had with the Stop Demovictions Burnaby organizers last week, but she did not mention any of the specific complaints brought forward to her by the organizers.

When the Stop Demovictions delegation tried to speak they were completely shut down. Councillor Jordan chose to renege on her own invitation at point, and organizers were told that because they had not applied to speak as a delegation, nobody would listen to them at this meeting. Organizers continued to present their Tenant Defence Policy, with hopes that it would get through to someone, but instead Councillors chose to speak loudly over the community group, insisting that they would simply not listen. Councillor Paul McDonell told a First Nations organizer that her points held no merit because she was not a citizen of Burnaby, when ALL of Burnaby sits on stolen, pillaged and colonized indigenous land. Councillor Sav Dahliwal raised his voice continued with a childish “we can’t hear you” denial, while organizers tried to push their points across. How are residents of Burnaby supposed to engage with their municipal government when those very government officials flat out refuse to hear to them? The committee instead focused on the lasagna and cheesecake that had been catered for the meeting.

Ultimately, if Councillor Jordan had really wanted to hear what Stop Demovictions Burnaby had to say, she would have made it clear the bureaucratic process necessary to have a voice at these committee meetings. But instead, she pretended that the group would be listened to and treated as equals, when really they remain invisible in the eyes of the City of Burnaby, just as ALL tenants of Metrotown are, as the city steamrolls the Metrotown Development Plan forward, putting thousands of tenants on the brink of homelessness. What became clear for activists greeted with such hostility is that the City of Burnaby will not engage Metrotown tenants in good faith. Every little thing must be a forceful protest.

In March 2017 the Stop Demovictions Campaign did a sit-in at Mayor Corrigan’s office to demand Burnaby’s Tenant Assistance Policy cover the tenants being denied support at the Belford Properties buildings at Silver Ave and Beresford. One outcome of this protest was that Councillor Jordan invited us to come to a Council Committee Meeting where they will be considering reforms to their Assistance Policy.

We have prepared this draft Policy statement as a “People’s Tenant Defence Policy” because tenants cannot be “supported” to find housing that does not exist because this Council is systematically destroying it. Tenants must defend ourselves against a profit-driven real estate market that turns our homes into investment commodities and landlords and governments that treat us as temporary sources of extra income and inconveniences. Our Tenant Defence Policy is part of the People’s Metrotown Plan, which we are working on as an alternative to Corrigan’s “Downtown” Metrotown mass-demoviction plan.

The most important consideration for a rezoning is that ALL residents rehoused within the area they identify as their community, in equal or better housing conditions, paying equal or lesser rents.

The BC Residential Tenancy Act uses eviction compensation (1 month’s rent as compensation for an eviction for landlord use of the property) as a way to offset the direct financial losses suffered by tenants when their lease is interrupted by the private property power of an individual landlord. Burnaby’s Tenant Defence Policy should use compensation differently because its context is the mass demoviction of hundreds of tenants at a time for the super profits of transnational development corporations. In this case, compensation should work as a form of redistribution of these profits, and a disincentive to rezoning and demoviction.

The Defence Policy should offer different rates depending on the conditions faced by tenants as a social group (not just individually), recognizing that our communities are harmed by demoviction even if we are placed in new housing. Compensation should be tied to average rent increases suffered by those evicted. For shorter term tenants (less than 5 years) the average rent increase is 25%, and for long term tenants (over 5 years) it is 50%. A People’s Tenant Defence Policy should include a city subsidy program that administers a long term compensation package of monthly rent subsidies to bring new rents down to their previous rents. This subsidy program should be open to application by ALL residents, recognizing that demovictions affect the whole renter community, not just those directly evicted.

Tenant rights are not the responsibility of the landlord who benefits by cutting corners on tenant’s needs. Tenants are being harmed by the landlords and developers who evict them. While the developer must fund supports for evicted tenants, the administration of these supports must come from elsewhere.

The Defence Policy calls for the City of Burnaby to pass bylaws that tenants can use to defend their rights, including a Standards of Maintenance bylaw and enforcement protocols.

The Defence Policy calls for the City of Burnaby to fund an independent tenant’s union to organize tenants in defence of their own rights, enforce city bylaws, advocate at the RTB, outreach and research problems faced by tenants, monitor the rental stock and the impact of demovictions. Rather than another City department that will be limited by political dynamics in City Hall, tenants need an independent fighting group with staff. The Defence Policy recommends initial City funding for this project of $250,000/year.