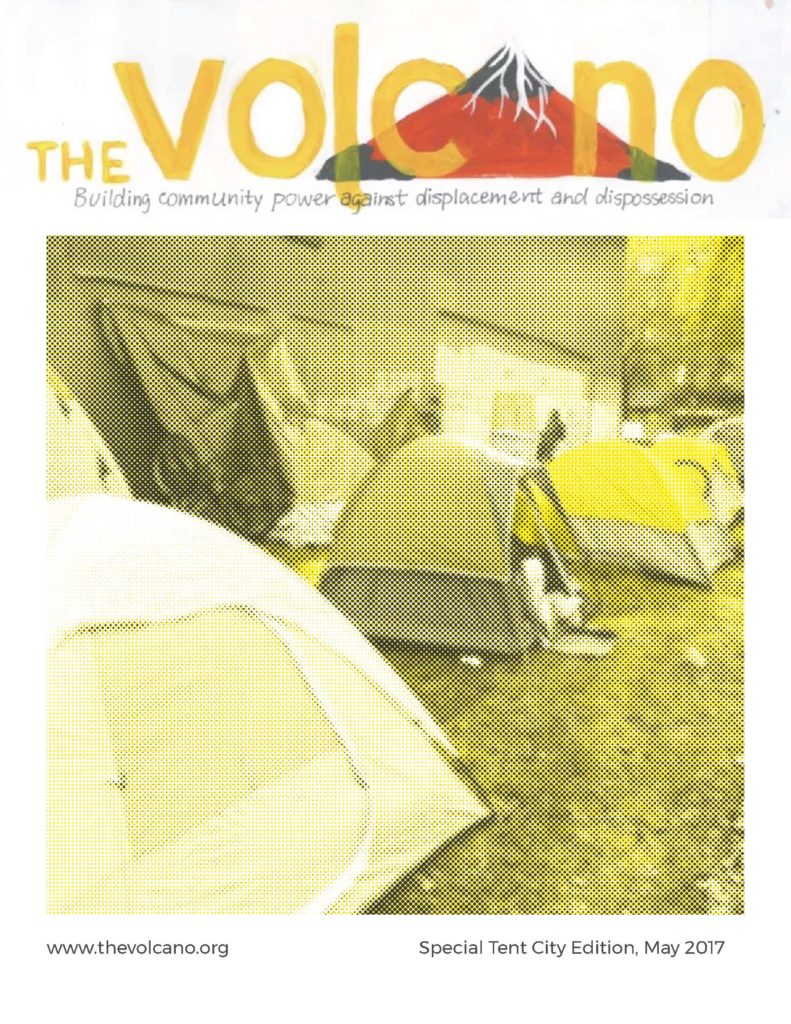 By creating tent cities homeless people are building social systems of support and solidarity, not otherwise provided by the government. At tent cities homeless people collectively pool and share their skills and resources; build life-saving community and relationships; watch out for each other and respond to emergencies during the overdose crisis; and establish temporary sanctuary from daily displacement, police brutality, and the constant criminalization of homelessness.

Still, more often than not, the response to tent cities has been to dismantle them and evict the people living there. The City most commonly argues that tent cities aren’t safe for residents in their justification for breaking them up  but in reality displacement destroys the stability, safety, and security that homeless people have created in the tent city, leaving them, once again, without a safe place to reside.

This is a special edition of the Volcano newspaper, with news from the two tent cities that are leading a legal and political fight for homeless people’s security and power over the private property rights of Cities: Ten Year Tent City in Vancouver, and Anita Place Tent City in Maple Ridge. Together these two tent cities are a base for legal and political claims for the power of homeless people, and exceptional social spaces where working class and Indigenous people in cities can unite in a common fight against the economic and policy forces of displacement that affect us all.

The Volcano printed this newsletter as a special print edition to distribute at the two camps, and at the BBQ organized to celebrate 10 Year Tent City’s Supreme Court victory against the City of Vancouver’s application for an injunction to displace the camp.

Read the articles from this newsletter here:

Saving lives, a sense of pride, and trans women’s safety at 10 Year Tent City: Affidavits from the defendants against the City of Vancouver’s failed injunction attempt