Mobilizing the Frontline of the Eviction Crisis

In the summer of 2017, Burnaby City Council passed a development plan for the Metrotown neighbourhood. The plan seeks to displace working class tenants in order to remake Metrotown into a condo-filled “downtown” of Burnaby, which is located on occupied Qayqayt, Skwxwú7mesh Úxwumixw (Squamish), səl̓ilwətaɁɬ (Tsleil-Waututh), and xʷməθkʷəy̓əm (Musqueam) land.

Burnaby is not the only suburb using “densification” planning schemes to gentrify residential areas near transit, to displace existing residents with demovictions and renovictions, and build their cities for the buy-ins of new professional-managerial residents to replace working people. Coquitlam, New Westminster and Surrey are also passing gentrifying “downtown” plans that will fuel the market-driven displacement of working class and Indigenous people out of Metro Vancouver altogether. These plans are a connected and coordinated effort by municipal governments to push all low income people out beyond the colonial borders of their cities, creating a vicious cycle of forced displacement.

The Metrotown Plan in particular is precedent-setting because of the critical mass of tenants ready to fight back, which makes the neighbourhood a frontline for resistance to the eviction crisis. The thousands of Metrotown tenants facing displacement have the power to break down the colonial rule of private property by burning their eviction notices in a refusal to be bound and targeted by a piece of paper which rests on the colonial power of land ownership.

The new suburb: No space for non-owners

The Metrotown neighbourhood looks starkly different than it did less than six years, or even six months ago: fully or partially constructed luxury towers dominate almost the entire block of Beresford Street alongside the skytrain station. With the 37 million dollar upgrade to the Metrotown skytrain station came  new luxury condominiums that threaten to choke the neighbourhood. The inescapable emotional impact of being forced to witness your neighbourhood become a concrete village designed to displace you can only be described as suffocating. For over six years now, the City of Burnaby has been systematically destroying the single largest remaining low-end of market rental housing stock in Metro Vancouver, resulting in close to 1,500 tenants being forced out of their homes and community. Another 6,000+ renters still face impending displacement.

Yet the demoviction crisis at hand is not new—we can find its root cause in private property relations that are at the colonial root of Canadian society and law and which are an unreformable rule of Canada’s capitalist economy. Real estate has become the central economic driver of the market in not only Vancouver, but the surrounding suburbs as well. Rapid transit oriented development has only furthered the influence of the real estate economy, which benefits very few off of the continual subordination of the majority. Vancouver’s embrace of a real estate centred economy paved the way for other municipalities, such as Burnaby, to follow this same destructive path of investment-driven private real estate market exponential growth at all costs.

The power of grassroots resistance

The passing of the Metrotown Downtown Plan in July 2017 has intensified the rate of demovictions, and it has also increased the alienation that Metrotown residents feel towards City and Provincial governments about housing. Thousands of tenants have lost any remaining hope they had that the B.C. NDP and Corrigan’s B.C. NDP-affiliated Burnaby Citizens’ Association (BCA) party would save them from eviction.

At a public hearing for another demoviction at the end of February, Metrotown residents decried council members as heartless, without a conscience, and disinterested in the fate of their constituents. After a dozen public hearings and over three years of fighting demovictions in the Metrotown neighbourhood, it has become obvious to residents facing demoviction that public hearings are not actually for the public. They feel that public hearings are a routine performance for a small percentage of wealthy property owners who benefit from mass development, at all other costs. Those who show up to City Hall in opposition to rezonings typically outnumber those in support by about 40 to 1, and in some cases there have been over 100 written and verbal submissions opposing rezonings that would result in demovictions.

However, it does not matter how many speak in opposition to rezoning applications because Burnaby’s Mayor Derek Corrigan has committed to destroying the whole neighbourhood. The B.C. NDP has stayed by his side, rubbing elbows with the rich at fundraising dinners, and turning their backs on tenants vulnerable to homelessness. Residents of the neighbourhood have come to believe that politicians will not save us, and they are starting to understand that instead we – tenants themselves in alliance with similarly affected communities organized in voluntary activist groups – must save ourselves. 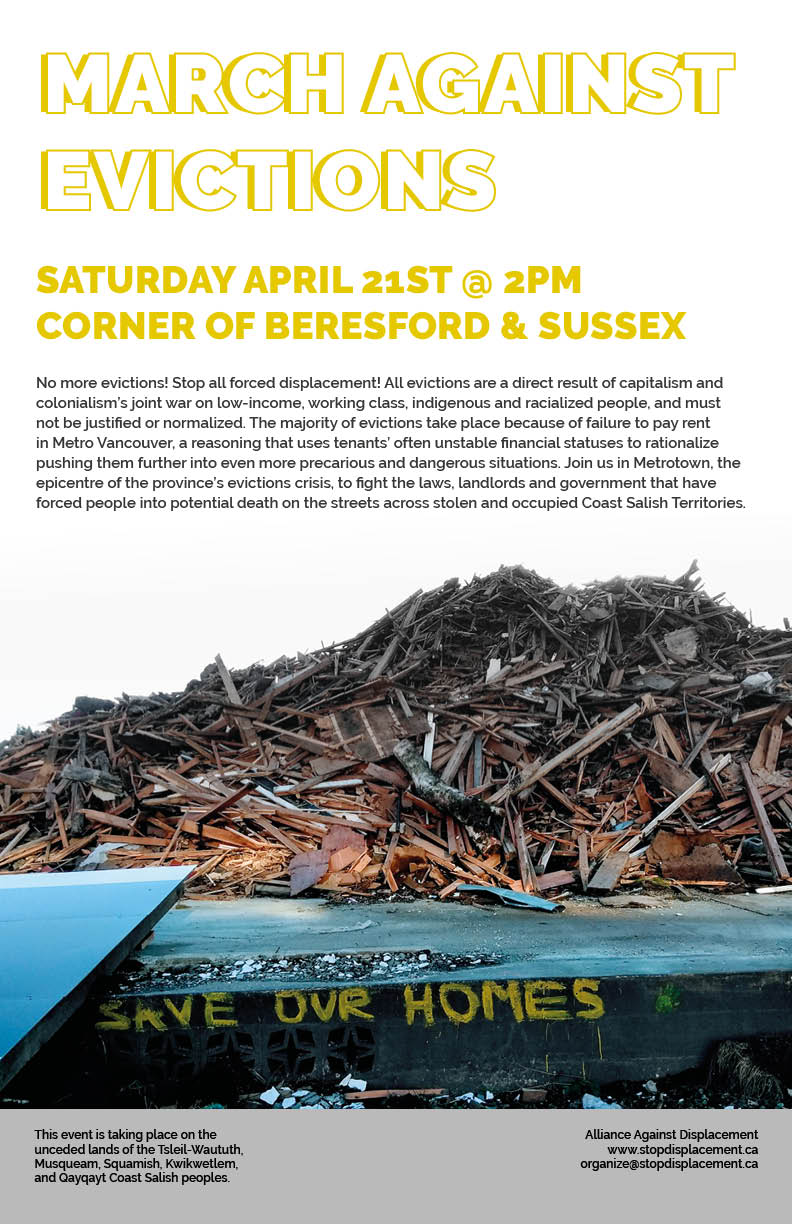 We will build a better world

In the spring and summer of 2018, the eviction dates for over 100 tenants who live on Sussex and Telford streets in Metrotown will come and go – but will the tenants? With vacancy rates still below 1% in so-called Burnaby, as well as across most of Coast Salish Territories, evicted tenants are being pushed into homelessness. In addition to supporting tenants who refuse to leave their homes to live on the streets, Stop Demovictions Burnaby is fighting to dismantle the systems that create homelessness and housing precarity: capitalism and colonialism. When developers eject Indigenous and working-class tenants from their homes, they are putting profits over people and continuing the ongoing theft of Indigenous land. Tenants must resist their forced displacement, but our goal is not to own stolen land!

At the most recent monthly Stop Demovictions Burnaby Townhall, close to 50 tenants came together and envisioned what the critical moment of a We Won’t Go Campaign would look like: the first day of an occupation that is not a temporary protest act but a commitment to holding the building indefinitely, led by current tenants. Overlaying the usual feelings of anger and fear that are commonplace at these  townhalls was an overwhelming commitment to action. Tenants made impassioned calls to action, urging those in the circle not to be afraid of taking direct action and defending the neighbourhood from corporate development attack. Tenants weighed the risks of eviction defense and decided they were worth taking.

A We Won’t Go campaign needs mass action, as tenants and supporters must come together, organize ourselves and stand with residents of buildings who are the most vulnerable. We must physically put our bodies on the line and blockade the building from cops, and we must also politically block the buildings by creating a space of resistance that is safe, strong and resilient. In the next couple months we will develop captains from each building slated for demoviction, to coordinate with other tenants, spread information and educate others on the deeper political moment they are setting in motion.

To ground this fight in concrete action and move towards a neighbourhood-wide eviction defense network, on Saturday, April 21st at 2:00pm at the corner of Beresford Street and Sussex Avenue, Metrotown renters and the wider community will come together and take to the streets in a march against all evictions. This action will be a pivotal point for the creation of a strong eviction-defense, as it will bring together those who are precariously housed as renters under attack, and those who are homeless from across these territories to build solidarity against corporate developers and the Canadian legal and economic systems which allow them to maintain their domination.

We will march to move towards the future we together will create. The struggle in Metrotown is a struggle which breaks through colonial borders and impacts all of us. No eviction is just, and no tenant faces eviction alone; the power of us coming together and fighting back is endless and Metrotown is on its way to becoming the frontline of this fight.

Back to the War on Drugs