Five residents and supporters from Nanaimo’s DisconTent City were briefly arrested in the morning of Tuesday, May 22nd  after resisting the removal of the tent city’s front gate by city workers. Under the guise of creating unfettered access for cops, city workers removed the fenced gate where homeless residents greet and document guest visits.

Nanaimo Director of Public Safety and Fire Chief Karen Fry gave the order for the RCMP to remove the gate at the entryway to camp. Campers explained that the gate is critical infrastructure that protects the camp and allows homeless people to govern themselves in a sanctuary from the structural violence they face in the rest of Nanaimo. Camp founder and leader Mike Pinder explained, “People have moved into this camp because we feel safer than on the street. When we sleep in parks we get our tent seized by bylaw, we get beat up by police, and we get attacked by vigilantes and our things stolen. We need the gate because it makes this space different and safer than an open park.”

People have moved into this camp because we feel safer than on the street.

The RCMP claimed that they were removing the gate because campers had refused the police “unfettered access.” Sgt. Dave LaBerge cited two incidents in the middle of the night when officers tried to enter camp without reason and were turned around at the gate. Mercedes Courtoreille, a camp supporter, explained, “Maintaining safety is the priority of the camp. We have a protocol at the gate that no one is welcome in without good reason and this applies to police too. Every time the cops have come, we have listened to what they have to say, and if they are looking for a missing person or someone with a warrant or attending with ambulance then we work with them, but if they don’t have a good reason to be here then they are not allowed in. Would you allow the police to come into your home in the middle of the night without reason? Into your gated community? We don’t either.”

Kent, a camp resident and human rights enthusiast, explained that having the gate is not only about stopping police officers from harassing campers, it keeps vigilantes and unwanted guests and partiers out. “Removing the gate is an attack on our self-determination,” he said. “We are trying to organize our community, to set rules and guidelines, and to define who is a resident and who is a guest and who is unwelcome. We need a gate to be able to defend the most vulnerable members of our community.”

The gate also protects homeless people from threats of violence from anti-homeless bigots. Underlying this threat is the fact that homeless people are significantly more vulnerable to violence than the housed population, having about half the life expectancy of non-homeless people. It is the dangers of homelessness that makes tent cities necessary in the first place, and what makes them protected by the security of the person provision of the Charter of Rights and Freedoms. DisconTent City residents have received a near constant stream of social media threats about attacks by Molotov cocktails, paintball guns, fire hoses, including a call for “a culling.” Activist Amber McGrath says that she has sent screenshots of these threats to the RCMP but when he came to take down the gate, Sgt. Dave LeBerge, who led the operation, said that he was not aware of any threats. Fire Chief Karen Fry’s claim that she is acting in the interest of public safety does not include the safety of those members of the public most vulnerable to violence. 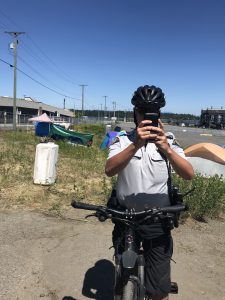 Nanaimo City Councilor Gord Fuller was present watching the fence removal and arrests and spoke out in support of the police action. When the police started arresting campers to remove the gate, Fuller called for campers to cooperate and made a veiled threat that, “as Council member I have the power to remove this camp if I want to.”

The police seizure of the camp gate is consistent with the City of Nanaimo’s treatment of homeless people. In December, City Council pandered to NIMBYs in the Chase River neighbourhood and refused $7million from the Province for a new modular, supportive housing building. When homeless people protested by setting up a camp on City Hall lawn, Fire Chief Karen Fry tricked them into abandoning their camp with a false promise that they could set up camps in parks around the city. Police and bylaw officers then harassed the smaller groups of homeless people and scattered them off into hiding. DisconTent City is the result of this harassment, and campers have learned that if they wait for the government, politicians, and officials to help them then they will be waiting forever.

Police arrested 3 camp leaders and 2 supporters who stood or sat in front of the gate. They were charged with mischief, cuffed, and loaded into a police wagon in the street. After city workers removed the gate, the 5 arrested were released without charges.

“This is a power game. It’s about the police maintaining power to harass homeless people,” says activist Amber McGrath. Since DisconTent City launched on Thursday, May 17th, the RCMP has developed a hostile relationship with the campers, working to extend the abusive power they hold over homeless people in the rest of the city to the camp.

On the first night of the camp, a single police officer tried to enter without cause and campers stopped him at the gate. He became hostile and sat in his car, shining a spotlight into the camp. He returned at 1:30am, as the camp slept, with 5 more officers, who swept the camp with flashlights shining in peoples’ tents. Campers turned this group around as well, arguing that a late night visit was not appropriate and created hostility and suspicion. On day two, campers cooperated with a inspection of the camp by Fire Chief Karen Fry and RCMP Sgt. Dave LeBarge and requested an opportunity to sit down and discuss protocols for a safer and respectful relationship. Fry and LeBarge never followed up on this request.

On day 3, there were 3 medical incidents in camp and when campers called 911 for ambulance service, the RCMP attended and, each time, were hostile and threatening. In the first case, when a man was in distress, the paramedics stayed back and watched while RCMP cuffed him and loaded him in a cruiser. In the second call, a man overdosed and campers responded and brought him back with Naloxone and assisted breathing. Campers decided to call 911 to ensure the man was safe. The paramedics, in this incident, prioritized care and treated the man with respect. But the police stood in a circle around the man receiving medical care, taunting him. Witnesses heard dispatch call and asked police to do a search of his tent and make an arrest. One officer said back over the radio, “We can’t, because of that stupid fucking law,” referring to the Good Samaritan Act that stops police from making arrests for simple possession on an overdose call. When the man, who was then awake, refused to go to the hospital with the ambulance, another officers said, “If you don’t agree to go then we will arrest you under the Mental Health Act.” In 4 days’ time, the RCMP has constructed significant barriers to health services for homeless people in DisconTent City and finished off by taking away a barrier that was helping keep people safe.

Mike Pinder, when asked by a reporter what campers will do next, without a gate, said, “We will not stop defending the safety of the people in this camp. We just need more people to step up, we have to be better organized. We’re up for that – this is an important fight and it is about our lives.”