We homeless, low-income communities are the heart and soul of Nanaimo. We are taking unused City-owned property to protect ourselves against the hostility of the government and property owners because we experience safety in numbers, and to improve our lives and better contribute to the community we love.

We homeless, low-income communities are the heart and soul of Nanaimo. 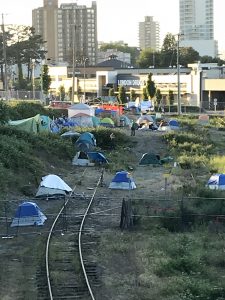 We acknowledge that the land we are using as Discontent City is the territory of the Snuneymuxw Nation, whose “Douglas” treaty of 1854 with the Crown did not cede use or title of their lands to Canada. Discontent City honours the sovereignty of the Snuneymuxw Nation; we do not make any claim to possession of this land but aspire to use it in a good way, consistent with Snuneymuxw land relations and stewardship principles.

Our camp is named “Discontent City” because we have had enough of false promises from BC Housing, when they talk about ending homelessness but only open wintertime shelters to warehouse the homeless out of public view. We have had enough of the ultimatum of “supportive” housing where we must choose between dying on the street or surrendering our tenancy rights and autonomy to live under the surveillance of social workers. We have had enough of Nanaimo City’s foot-dragging and pandering to NIMBYs who will oppose all social housing, shelters, or any other community service for low-income people. We have had enough of watching our beloved community members die in the shadows of this city. Landlords and poverty-level incomes have taken our homes, and governments aren’t building homes we can afford, so, to survive, we are making ourselves a home.

Discontent City is our new home

We are a self-organized community. We don’t want or need social workers to manage Discontent City or our lives. We call on the City and Province to provide us with the same infrastructure that all Nanaimo residents expect and receive, including drinking water, bathroom facilities, and garbage collection.

This site is important to us because it is a symbol of the priorities of the City of Nanaimo. We have taken over this corner of the city-owned Port Drive property because it should be used for the greatest community good, which we believe is to protect and defend the lives and well-beings of those members of the community most vulnerable to injury and death. We want the City to publicly dedicate this land for social housing and for the Provincial Parties to build social housing here.

A shelter is not a home. Nanaimo shelters have provided many of us with basic survival services, but we are human beings and we need more than basic survival.

More than basic survival isn’t luxury. It is having your own room, your own door you can close and lock. It is having a home where your kids are. We have our kids taken away because the government provides shelters and institutional, “supportive” housing where our kids aren’t allowed. A home is where you can turn off the lights to sleep and turn up the heat if you’re cold or open a window if you’re hot. It is feeling safe and not having to keep your guard up. It is having a friend over to play cards.

We are just one site in a major housing crisis. We are demanding homes for all unhoused people in BC. We in Nanaimo stand united with unhoused and low-income communities everywhere.

Housing and health and social services must be provided according to the health needs of each person, not bundled into institutions branded as homes. Some people say there should be drug treatment before housing, but if there’s no housing to go into then we go from treatment back to a warehouse shelter or back to the streets where it’s really hard to stay off drugs. We need housing where we can feel secure and go into and come back from treatment.

So-called “supportive housing” means being isolated from our kids and families, whether biological or social families. We can’t get custody of our kids in supportive housing because minors aren’t allowed and the units are so small. We can’t have guests when we want or overnight. Supportive housing continues to break up Indigenous peoples’ families at a time of so-called reconciliation.