Burnaby’s mayoral candidate Mike Hurley and his supporters from the Green Party have created a major challenge to Mayor Corrigan’s long rule with their centrepiece campaign promise of stopping demovictions in Metrotown. They have picked up the grassroots Stop Demovictions Burnaby campaign’s long standing demand for a “moratorium on demovictions” until existing purpose built rental housing can be replaced. Through grassroots organizing in the streets, Stop Demovictions created a political vacuum that these municipal candidates are now scrambling to fill. But Hurley’s moratorium falls short of the spirit that fills the movement in the apartment buildings and streets of Metrotown.

On Thursday, October 18th, just days before the Municipal election, tenants facing demoviction and those fighting with them held a news conference to demand more than a moratorium; to protect Metrotown as a renter-majority neighbourhood and make it a downtown for Metro Vancouver’s working class and Indigenous tenants.

Metrotown residents and activists gathered amidst construction and rubble, in front of what used to be 6525 Sussex Avenue, but is now a gaping hole in the ground. When the fate of this building, alongside the two beside it, was decided by City Council last December, Stop Demovictions Burnaby, including tenants from neighboring streets, knocked on doors, rallied, and spoke out at the public hearing. When it was evicted in July, Stop Demovictions painted slogans against evictions on its walls and held a barbeque outside. In front of the rubble on Thursday, Metrotown resident and Stop Demovictions organizer Allan, passionately described, “We’re asking the city not to disrupt us. We’re asking you to help us stay.” It’s constant protest like this which exposes  Burnaby as operating and developers as profiting from a system which was never built for anything other than the destruction and exploitation of working class and Indigenous people. As organizer Emily stated “the business-as-usual destruction of the Metrotown neighbourhood can’t be allowed to continue.” Stop Demovictions challenges City Council and Mayoral candidates to use the moratorium on demovictions promised by the Greens and Hurley, but to go further and protect the majority-renter demographics of the Metrotown neighbourhood.

Spend the Surplus: stop the stockpiling of wealth while sending people to the streets

The City of Burnaby clocked in a $1.265 billion dollar budgetary surplus at the end of 2017, which has continued to grow steadily throughout 2018, likely to top 1.5 billion by the end of the year. Burnaby is one of the only two cities in the province to operate debt-free, going far beyond a simple balanced budget with millions tucked specifically away for infrastructure emergencies. The $1.5 billion is additional to those infrastructure savings; hidden away from those who need this public funding the most. Tenants and supporters addressed onlookers and the media to demand that whoever the new municipal government will be in Burnaby use this extraordinarily massive surplus to build non-market, tenant-controlled housing at welfare and pension rates in Metrotown and across the city, as every skytrain station in Burnaby is facing the wrath of “transit-oriented” development.

Hurley’s proposed moratorium on demovictions until replacement units at the same rents can be guaranteed will still allow developers to build luxury condominiums. This amendment will ensure that a few floors of token rental housing will be included in some developments — this does nothing to protect the majority renter demographic of Metrotown. Hurley’s moratorium would still allow mass densification to drive market forces that will gentrify Metrotown, continuing to homogenize the traditionally nationally and linguistic-diverse community and driving up prices of food and services. Plus, in profit-driven rentals, landlords will still have the tools of the Provincial Residential Tenancy Act to evict renters and bring in new tenants at much higher rents.

Tenants speak out: preserving Metrotown on our own terms

At the press conference, Allan, a Metrotown resident of many years, addressed media and electoral candidates by stating that Metrotown must remain a community for working class and Indigenous renters – a community of collective power against the colonial state. He said:

Stop Demovictions Burnaby demands that Burnaby’s massive surplus is used to protect urban Indigenous homes – to construct non-market, tenant-controlled, permanent housing for urban Indigenous people. Housing for urban indigenous people in Canada is political – more than 30% of homeless people across BC are Indigenous, despite making up just 7% of the population. As Sadie Morris, a Nuu Chah Nulth resident of Metrotown and organizer with Stop Demovictions, explains “This is why Urban Indigenous homes need to be protected from homelessness and further violence. Indigenous people are at higher risk of violence and death when homeless therefore a home is literal, physical protection from colonialism. Along with physical protection, Indigenous Children must be protected from child apprehension, another form of systemic power over Indigenous people.” She elaborates here:

“Because we have our Metrotown home, I protected my daughter all of her life from harm and child apprehension and because of our home not only is she flourishing but she is a strong Indigenous woman. I also know other Indigenous youth who are flourishing in our home community of Metrotown. As an Indigenous mother, because I am protected by housing, I am able to continue to raise our healthy family.”

Although there are 3,000 Indigenous people in Burnaby, there are very few services or spaces for Indigenous people. Morris says Burnaby’s $1.265 Billion dollar surplus should also be used for another form of tangible support — constructing an Aboriginal Friendship Centre in the City of Burnaby – a cultural space that is sorely missing. She says such a space could include Indigenous Counselling services, youth programs, prenatal services, general labour programs, education programs, talking circles and support services for elders.

The commitment we demand: Thousands, not hundreds of homes 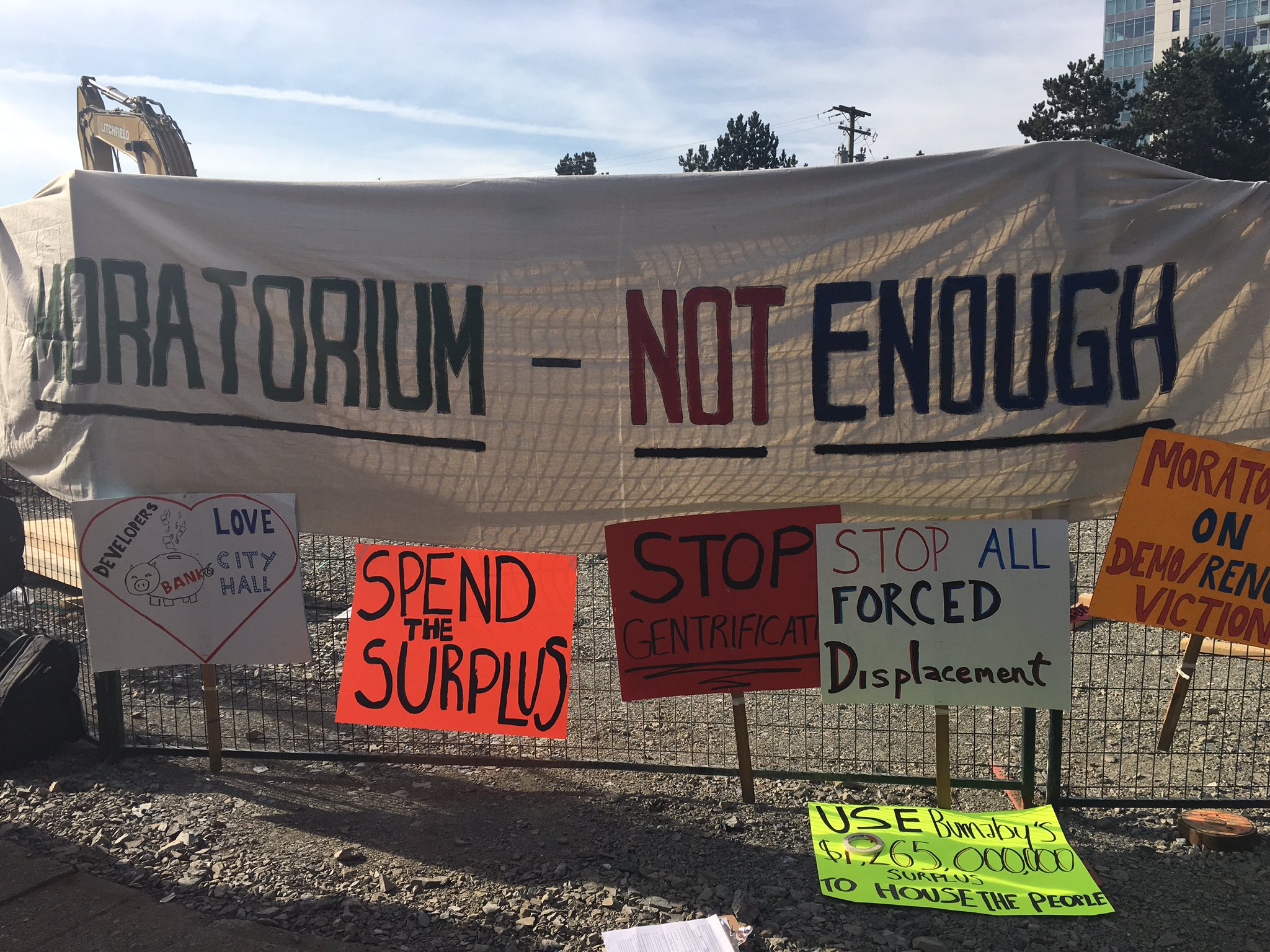 The Burnaby Green Party promises to invest $20 million a year into affordable housing — this would allow for the construction of only about 100 units of non-market housing. Pending matching funds from the provincial and federal government, this could result in up to 300 units built. Stop Demovictions organizer Zoe Luba said, “A few hundred units of affordable housing when thousands are being destroyed is mere crumbs, when the people need bread —  we demand a full commitment to constructing enough units of non-market, tenant-controlled, permanent housing to house all working class and Indigenous people in Burnaby safely and securely.”

Stop Demovictions Burnaby Organizer Cecile Revaux highlighted that decades of austerity and neoliberalism under provincial governments of all party stripes have created a vicious cycle of astronomical rents and near-zero vacancy rates that has pushed thousands of people violently out of their homes; many into homelessness. She explains “Burnaby’s surplus must be used to disrupt this cycle, and end homelessness in Burnaby, by housing all homeless people in tenant-controlled, non-market, permanent housing. In the meantime, homeless people must be protected and allowed to move into buildings across the city which sit empty – the gross contradiction between empty buildings and homelessness must be eradicated.”

Making a downtown for working class and urban Indigenous people

Working class and Indigenous tenants living in the Metrotown neighbourhood need more than a moratorium — we need guaranteed, permanent, tenant-controlled non-market housing that necessitates a full investment of Burnaby’s massive budgetary surplus. We need a downtown for working class and Indigenous tenants from across the city. As Stop Demovictions Organizer, Emily Luba, says, “although it is rewarding to see that the Greens and Hurley have shifted their platforms because of our organizing in the streets, the colonial and capitalist restraints of city hall will always limit their actions to inoffensive reforms that maintain the status quo of these systems of domination. It does not matter who is elected — we will continue our fight outside the electoral system for a world without property — a world that does not put the wealth of a few over the humanity of the masses.”

Divest from Police, Invest in People: Organizing Against Police Power in Surrey

“You idiots, we’re fighting for you!”: Homeless people as revolutionary leaders