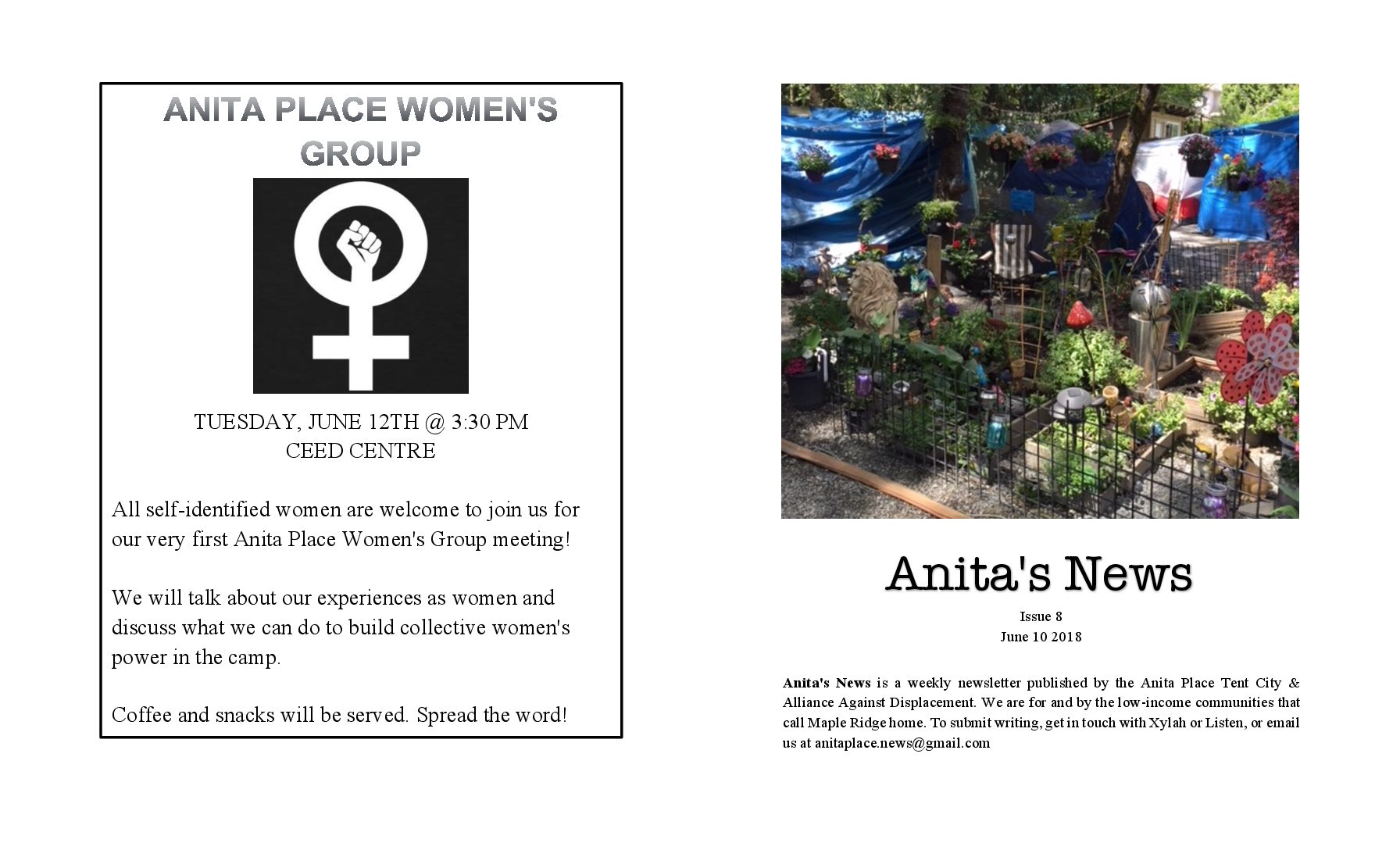 Anita Place is like an ecovillage: an interview with Nicole

Below are excerpts from an interview I did with Nicole a month ago. To me, the big take away was that people can ignore individual homeless people, but they can’t ignore homeless people who have come together and organized themselves. For Nicole, the ideas behind Anita Place are not about money and property, but meeting needs, caring for one another, and living together in an ecological way — “ecological” meaning occupying land owned by a colonial government on the basis of usage, rather than ownership.

I ended up at Anita Place because I got evicted from the house that I was staying at and had a bad turn of events. My son passed away. I hadn’t been homeless for ten years. But one thing led to another, at first we ended up staying in our truck but then the truck got taken away and we came down here.

We were paying the hydro for ourselves and for the landlord’s other buildings, so we found our rent really expensive. Our eviction was about discrimination, it was about friends that had bicycles instead of vehicles, and people who didn’t look or dress like the neighbors. Bylaw kept getting called by one neighbor and they used excuses like noise but really it was discrimination.

I have no idea where I’d be living if there were no tent city. It’s kind of scary thinking about it because being on your own, without a community, is really scary. I would see myself probably sleeping, maybe, in odd places, down by the river or in the forest somewhere away from the city so people wouldn’t be able to see me.

When I first came here I didn’t know they had a council or any group together. That made me quite happy to know that there was kind of structure here. It’s a lot more secure and safe than I thought it would be. I was kind of intimidated to come down here at first but now it’s like a little community, like a little village.

One of the men here saved these people whose truck went into the ditch. Nobody really recognized him, but I’d like to say that he actually went into the vehicle and lifted two people out of the truck before the ambulance got here. We’re a lot nicer than people really think.

The government should take more time to listen to homeless people’s needs. They’re not hearing the real needs of the people. Our needs are really very simple, they’re not so complicated! I think the ideas at Anita Place aren’t about being rich or poor, but about nature, this is like an ecovillage. Where we can have our own needs met and care for ourselves.

It’s a dog-eat-dog world out there, but Anita Place doesn’t have to be

I don’t live in Anita Place, but I’ve been coming around since the beginning and I really care about the tent city. In the beginning, it felt like we were a family, like we were a lot closer. People were able to get along, but lately it feels like everything has to turn into a conflict.

Some people are living day by day, because homelessness is hard to survive. Staph is going all around. But we can also take care of one another, respect one another, and think about how our actions affect others. I see people helping out around tent city. We are our own little population and society — we have our own rules.

Anita Place isn’t about being a party house — it’s about taking care of each other, surviving together, and struggling together.