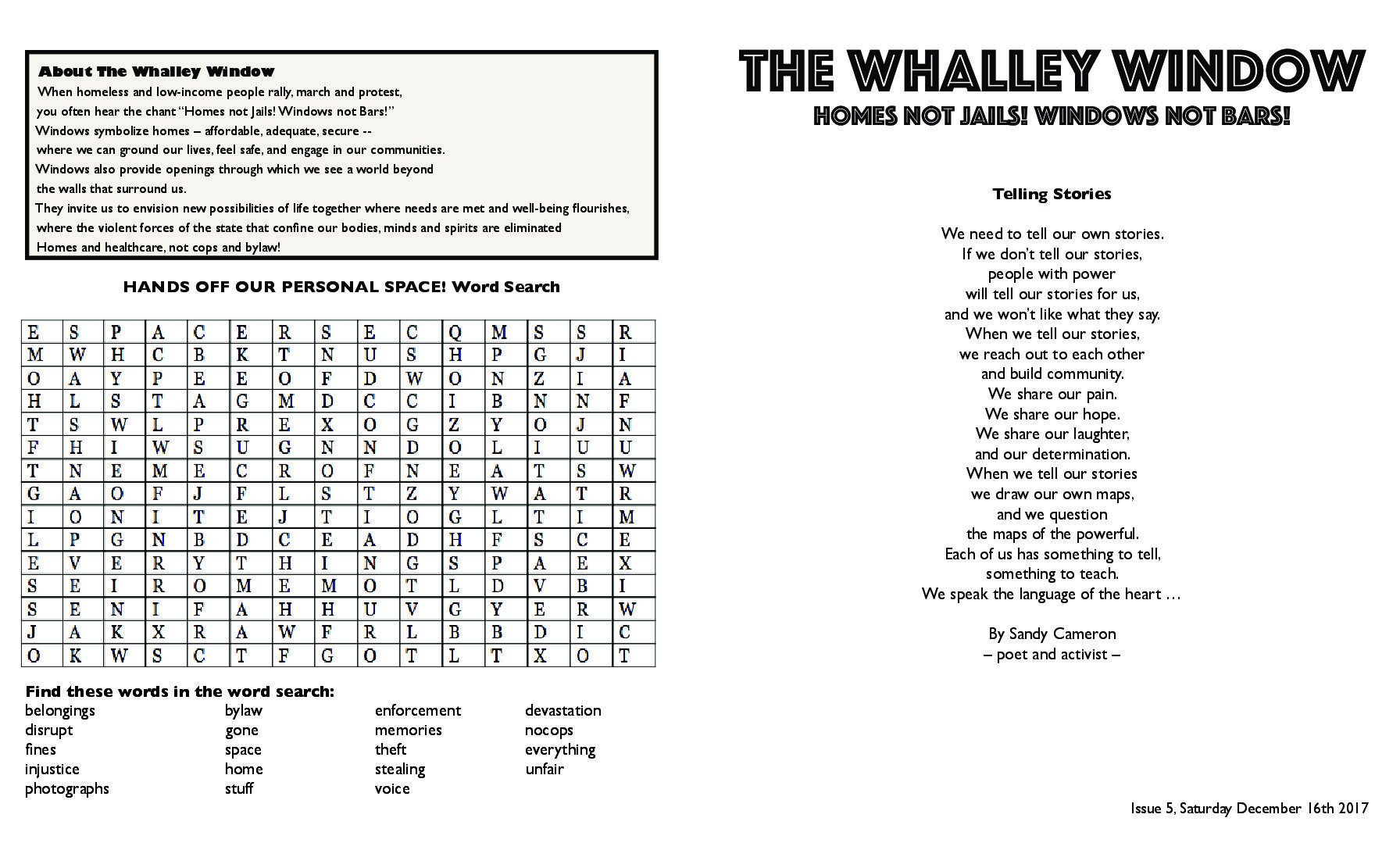 Download the PDF of The Whalley Window – Issue 5 and the Insert.

By Sandy Cameron, poet and activist

A few weeks ago, I tried to stop bylaw from taking my stuff, but police put me in handcuffs saying I was under arrest for obstructing justice. I didn’t go easily. I said “You can pull me, push me, or drag me … whatever you gotta do, but I’m not going anywhere with you willingly.” So they stuck me in a police car and took me down to the Surrey Central liquor store parking lot. Then they uncuffed me and let me go.

When I got back to the strip, my bedding, a carving a friend made for me, you know, my shit was gone. They took everything because it was a move day and I was the last to get my tent up and move my stuff in; they figured it was abandoned, or maybe that I took too long; I didn’t know there was a time limit.

Cops and bylaw are just bullies. One time I had my empties across the street, and I was waiting to go to the bottle depot. They went to where my tent was to steal my possessions. So I went over and said, “I’m right here.” They said, “You can have your empties or your personal possessions; but you can’t have both.” So they took my empties, two big garbage bags full of them.

Two nights ago, the cops gave me 5 seconds to get out of the dumpster at the end of the block where I was getting cardboard; he said I’d be charged with trespassing and theft, and he would throw me into the back of his cruiser. It’s just normal, everyday intimidation and harassment.

Bullies in Uniform
By Jeff Salter

On Sunday I was here visiting Bonnie. The cops were coming along and doing bike checks and taking things that they classified as contraband. I had a brand new bike. The cop picks it up and slams it down on the sidewalk and scratches the bars. My helmet was on the bars and it fell off when he turned the bike over. I had water in it and gloves; he just kicked it all out of the way; he didn’t care about it. He ran the serial numbers and it came back 10-10, which means it wasn’t wanted – it wasn’t stolen.

I voiced my opinion to him, I said, “How would you like me to go into your house and treat your stuff the way you are treating mine?” And that was it – next thing you know my arm was being wrenched behind my back, the other cop grabs my other arm. They put me in the cruiser with the cuffs on so tight my hands were turning blue. They cuffed me because they said I was obstructing justice. And all I did was to express my opinion.

They kept me in the cruiser for 20 minutes, and then I said I want to speak to the supervisor right now. They got the supervisor, and he and I happened to have rapport from previous times. So he got me out of the cop car and took the handcuffs off of me then let me go.

It’s like 1940 Germany here on the strip. The cop screamed right in my face, “This is my turf and I’ll do what I fuckin’ want.” These guys are just bullies in uniform. They take it to the limit. I also feel that the cops are degrading people by taking their stuff, the way they talk to them, the way they treat them. They talk down to you; you pick up the attitude from them that we are just scum. It’s not right.

What do Surrey and Los Angeles have in common?
By TWW team

This week, Philip Alston, a United Nation monitor on extreme poverty, was given a walking tour of “skid row” in Los Angeles. He was shown a shelter courtyard where dozens of people were setting up places to sleep on the concrete because there was no room inside. Then block after block he encountered people forced to survive on the streets, in one of the richest countries in the world where access to housing is not viewed as a human right.

Alston’s tour guide was General Dogon, an organizer with LA Community Action Network. Dogon criticized the city for its criminalization of poverty. “He said the street cleanings were designed to harass homeless people, accused police of confiscating their belongings and said skid row enforcement was aimed at driving the poor out of downtown.” (LA Times)

General Dogon emphasized that there is no place for people to go who are forced out of the area, and suggested that the money spent on policing homeless people should be directed to building low-cost housing on lots owned by the city. Meanwhile, inside the halls of power, city politicians were putting a positive spin on the problems, asserting that their management of the crisis was working and solutions were currently in the works.

In our fight for housing, we are not alone. And the message from the streets – from LA to Surrey – is the same: End poverty and homelessness, not manage it with cops and bylaw.

About The Whalley Window

When homeless and low-income people rally, march and protest, you often hear the chant “Homes not Jails! Windows not Bars!” Windows symbolize homes – affordable, adequate, secure – where we can ground our lives, feel safe, and engage in our communities. Windows also provide openings through which we see a world beyond the walls that surround us. They invite us to envision new possibilities of life together where needs are met and well-being flourishes, where the violent forces of the state that confine our bodies, minds and spirits are eliminated. Homes and healthcare, not cops and bylaw!