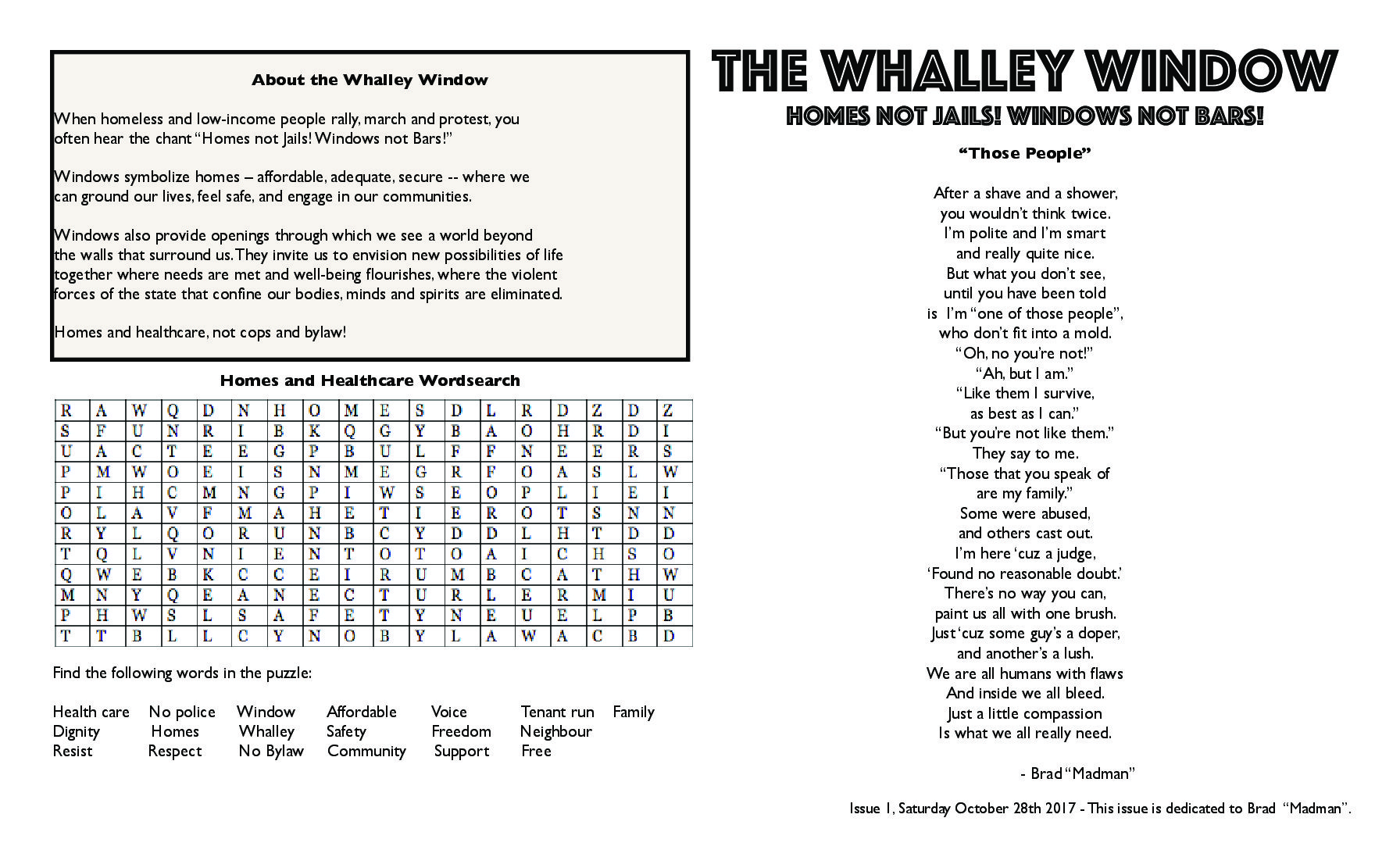 Download the PDF of The Whalley Window – Issue 1.
This issue is dedicated to Brad “Madman”.

“Those People”
After a shave and a shower,
you wouldn’t think twice.
I’m polite and I’m smart
and really quite nice.
But what you don’t see,
until you have been told
is I’m “one of those people”,
who don’t fit into a mold.
“Oh, no you’re not!”
“Ah, but I am.”
“Like them I survive,
as best as I can.”
“But you’re not like them.”
They say to me.
“Those that you speak of
are my family.”
Some were abused,
and others cast out.
I’m here ‘cuz a judge,
‘Found no reasonable doubt.’
There’s no way you can,
paint us all with one brush.
Just ‘cuz some guy’s a doper,
and another’s a lush.
We are all humans with flaws
And inside we all bleed.
Just a little compassion
Is what we all really need.
– Brad “Madman”

“Surrey Steals from the Homeless” One Year Ago Residents of the Strip March to City Hall
Originally published in The Volcano newspaper, October 6th 2016

One year ago, Alliance against Displacement supported residents on the strip in organizing a rally and march to City Hall in order to protest Bylaw’s constant theft of their belongings; the action was called “Surrey Steals from the Homeless.” To honour that courageous act of “speaking truth to power,” the Whalley Window is reprinting an excerpt from an article written about it that was published in the Volcano newspaper.

An hour before “Surrey Steals from the Homeless” demonstration was set to start on Monday October 3rd, the organizers were feeling a bit desperate. Wanda was having a hard time getting people to come over to the sound system and the newly painted banner that read Homes Not Theft. “They’re scared to leave their stuff,” she said.

Then, as if on cue, a City garbage truck slowly drove by, implicitly threatening all hundred or so people down the strip with the familiar danger of the bylaw officer confiscation and destruction of all their worldly possessions.

And not only theft, two different women explained that they wouldn’t march
because if the cops saw them protesting they would face retribution later. “No one can
protect us from the police,” one said. It was clear that the reasons we had to fight were
also obstacles to that fight. The focus of the rally was the experiences and demands of the homeless residents of 135A. After a few brief speakers on the Strip, the rally took to the streets and, chanting “Surrey steals from the poor! We won’t take it anymore!” they marched to face the mayor at city hall.

On route, the marchers proudly took over King George Highway and then 104th Ave before climbing up the steps and pushing past security guards into City Hall. Inside City Hall, with RCMP lined up, arms crossed across the room, the voices of 135A rang out.

Christine explained that bylaw officer theft of her belongings keeps her from accessing services like food servings, and it feels like punishment for having no where to go but the street. All of Brad’s belongings were stolen and destroyed by bylaw officers while he was sweeping the street, keeping his community clean. And a young woman resident of the Strip said it feels like outsiders don’t understand what is being stolen from the homeless. The City talks about it like it’s trash, but it’s everything people have, from the tents they need to survive, to “precious things” like the ashes of lost loved ones. “They don’t consider what they’re doing to us,” she said.

The rally in City Hall closed with the crowd decrying the dehumanization and criminalization of the homeless in Surrey. Wanda, holding the Homes Not Theft banner, shouted out that 135A is the “heart” of Surrey. “We are a community full of love for each other,” she said. “We depend on each other to survive.” No one from the City met with the protesters to receive their demands for a resident-run tent city on an empty lot and social housing for everyone on the strip. But the march changed the feeling on the Strip. Residents walking back to their tents broke out in spontaneous chants, and they were smiling, they were feeling defiant.

About the Whalley Window
When homeless and low-income people rally, march and protest, you often hear the chant “Homes not Jails! Windows not Bars!” Windows symbolize homes – affordable, adequate, secure – where we can ground our lives, feel safe, and engage in our communities. Windows also provide openings through which we see a world beyond the walls that surround us. They invite us to envision new possibilities of life together where needs are met and well-being flourishes, where the violent forces of the state that confine our bodies, minds and spirits are eliminated. Homes and healthcare, not cops and bylaw!