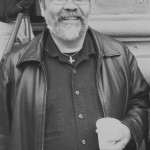 Jack Gates, a tenant leader at the Regent Hotel in Vancouver, and a member of the SRO Collaborative, won $1675 in a Residential Tenancy Branch (RTB) decision in April.  The money is compensation for not having heat and hot water for over a year.  The RTB arbitrator also awarded Gates a rent reduction of $75 a month for each month when he doesn’t have hot water and $75 a month for each month that he doesn’t have heat. (…)

Beginning in this Winter issue, the Volcano will recognize a community member for their advocacy and organizing efforts in the Downtown Eastside community. For our first recognition we would like to spotlight Jack Gates, a resident of the Regent Hotel. Over the past few months Jack has been bringing media and community attention to the lack of heat and hot water in his building. I met with him to talk about his involvement in renters’ rights and organizing in the Downtown Eastside. “I’ve lived in the DTES for around a year and a half and the people here are family to me-brothers and sisters. Jack identifies as a spiritual man and isn’t shy when speaking about his newfound faith that has made him into the person he is now- a man working for the people. He says, “God’s the reason that I quit drugs and alcohol. People are in slavery, enslaved by their own addictions.” (…)