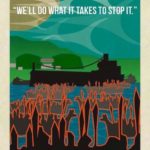 A call has gone out to all supporters for material aid in the Kwantlen Nation’s struggle against the expansion of the proposed Kinder Morgan pipeline through their territories, as the campaign to strengthen their land and water defenses is ramping up. Educator and organizer Brandon Gabriel announced the Kwantlen Nation’s ambitious plans to resist Kinder Morgan to a packed house of supporters at the lelem’ cultural centre on March 31st. At least $4,000 will be needed to support the canoe programs, which will include construction of a new storage & launch facility, and another $4,000 more is needed for the Wellness Centre construction materials.  Built according to traditional methods at a site yet to be determined, it will also serve as a centre for educating on plant and wildlife restoration. (…)